Background: Presentations of mixed polypharmacy overdose are increasingly common and frequently require treatment within the Intensive Care Unit (ICU). We present the novel use of Terlipressin acetate to rapidly overcome refractory shock in a patient that presented with mixed polypharmacy overdose. The Shock was refractory to conventional vasopressors and use of terlipressin acetate reduced length of stay in the ICU.

Conclusions: Our case is the first of its kind to describe the use of terlipressin acetate in mixed polypharmacy overdose, to achieve recovery from refractory circulatory shock and simultaneously to reduce clinically inappropriate polyuria, presumably through its Desmopressin-like effects. We demonstrate that terlipressin is safe in high doses using rapid dose frequency escalation as an antidote to angiotensin II receptor blockade, which causes Renin-Angiotensin-Aldosterone-System dysregulation.

We introduce the case of a 59-year-old male MG who overdosed on his prescribed medications including two anti-hypertensives and two diuretics, resulting in refractory circulatory shock. Polypharmacy overdoses are common, frequently involving anti-hypertensive medications which may cause profound hemodynamic instability. Angiotensin II Receptor Blockers (ARBs) inhibit the action of angiotensin II at the AT1 receptor and cause RAAS dysregulation. Consequently, angiotensin II mediated vasoconstriction, sympathetic activation, aldosterone release baro-receptor desensitization and renal sodium reabsorption are suppressed, reducing systemic vascular resistance and blood pressure for up to 48 hours. ARBs blunt the physiological sympathetic and vasopressin response to hypotension and reduce the vasoconstrictive effects of catecholamines [1]. Calcium Channel Blockers (CCBs) reduce calcium ion influx in myocytes and vascular smooth muscle, resulting in peripheral vasodilation and reduced systemic vascular resistance without inotropic or chronotropic effects. In overdose, persistent hypotension can occur for up to 72 hours.

Systemic vascular resistance is maintained by the Renin-Angiotensin-Aldosterone-System (RAAS), sympathetic tone, and the Vasopressin system. In combination, ARBs and CCBs can cause profound circulatory shock and lack of response to conventional vasopressors. Angiotensin II normally promotes calcium influx in myocytes increasing contractility. Concomitant blockade by CCB would have exacerbated loss of this normal reflex in response to hypotension. Therefore, our patient's refractory circulatory shock resulted from the synergistic effects of the anti-hypertensive medications. The co-ingested diuretics caused a persistent and profound diuresis, exacerbating the shock, electrolyte disturbance, and hypovolaemia. Frusemide is a potent loop diuretic that increases sodium, potassium, and chloride loss in the ascending limb of Henle’s loop and both proximal and distal tubules, effects last up to 8 hours. Hydrochlorothiazide acts on the renal tubules to increase sodium and chloride loss, resulting in reduced plasma volume, with duration of action up to 24 hours. Terlipressin acetate is a synthetic prodrug of Vasopressin. It is broken down by endopeptidases to lysine-vasopressin and has a significantly prolonged half-life of between 30 minutes and 6 hours [2]. It has multiple physiological actions through different receptors. Action at V1a receptors stimulates vasoconstriction, V1b causes ACTH production from the anterior pituitary, V2 receptor interaction causes an increase in the quantity of aquaporin-2 channels in the initial and cortical collecting tubules and medullary collecting ducts of the kidney, increasing water resorption. An action which is not fully understood is the effect of vasopressin at Purinoreceptors (P2 subtype) in the cardiac endothelium, which mobilizes intracellular calcium stores and may affect inotropy.

The case and clinical course is summarised in (Table 1) and (Figure 1). After a single push-dose of terlipressin noradrenaline was rapidly weaned. Urine output improved significantly following an extended period of severe polyuria once terlipressin was administered. MGs background medical problems were Obesity, Hypertension, Depression, and Psoriatic arthritis (never on steroid or immunosuppressive therapy). 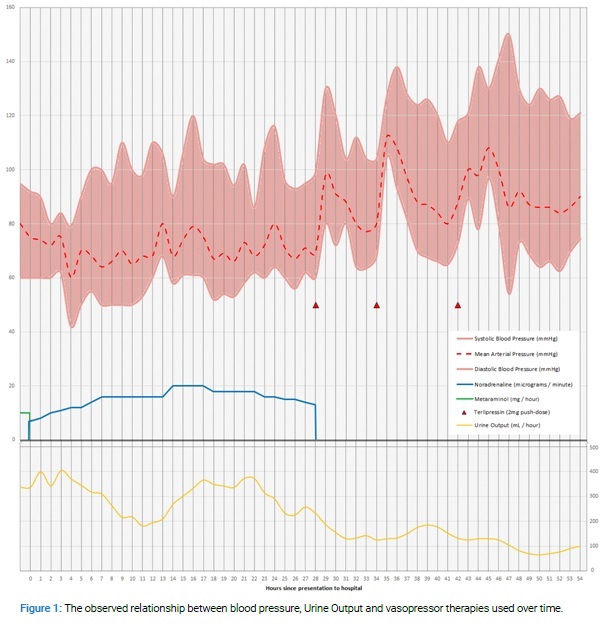 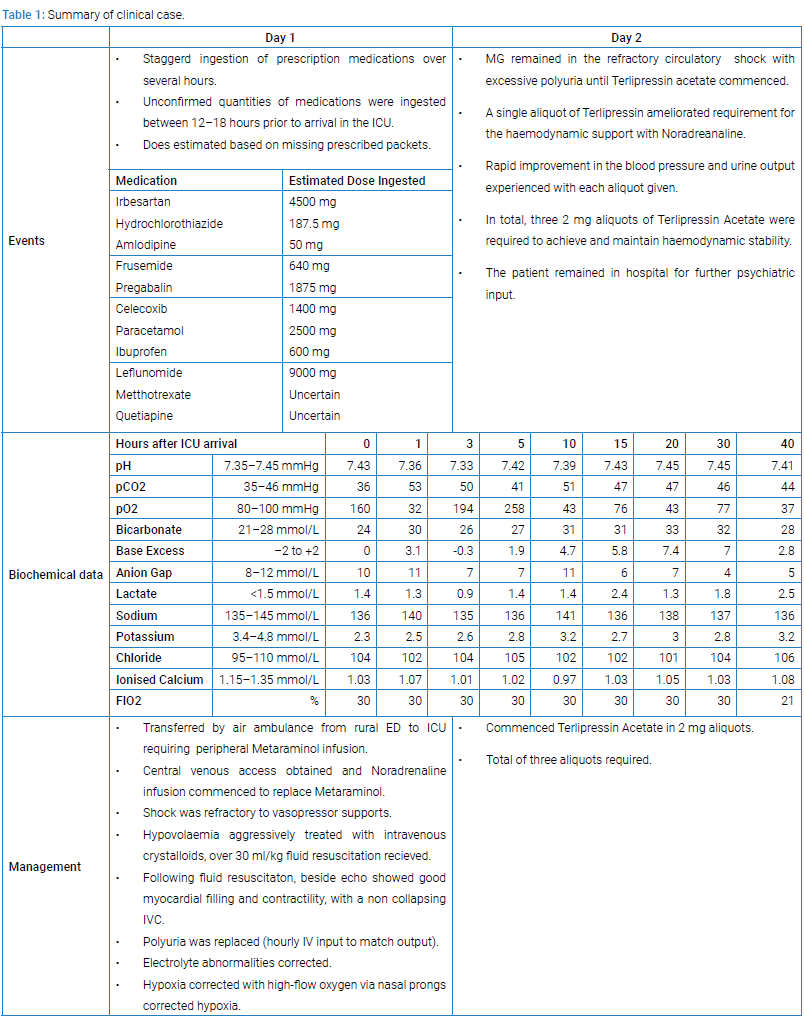 This case is the first to report recovery from refractory circulatory shock in mixed polypharmacy overdose including ARB and CCB and reduction in severe polyuria in the context of loop diuretic overdose using terlipressin acetate. This data supports the safety profile of terlipressin acetate and its use in patients with circulatory shock caused by RAAS dysregulation. By rapidly escalating terlipressin dose frequency we quickly achieved hemodynamic stability and overcame the vasoplegia secondary to RAAS dysregulation.

Patients in circulatory shock secondary to RAAS dysregulation and CCBs often require prolonged intensive care unit admissions until vasopressor supports can be weaned off; the use of terlipressin acetate in this patient group may reduce the pressure on Intensive Care beds by reducing the time to recovery of these patients or negative the need for admission to ICU completely.

Our patient received three push-doses of terlipressin 2 mg, each resulting in evident improvement in blood pressure and reduction in polyuria. This supports the safe use of high dose terlipressin and rapid frequency escalation and may negate the requirement for noradrenaline infusion when this knowledge is applied to similar cases in the future. Our patients circulatory shock was refractory to metaraminol and noradrenaline infusions, similar to a case of combined amlodipine and ARB overdose causing severe hypotension reported by Smith et al. [1]. In that case, the patient’s hypotension was refractory to high-dose Vasopressin infusion. The patient did not receive terlipressin acetate but instead responded to high-dose insulin therapy.

ARBs and Angiotensin Converting Enzyme Inhibitors (ACE-I) cause similar hemodynamic effects through RAAS blockade. ACE-I and ARB overdoses both result in pathological RAAS dysregulation. Case reports of ACE-I overdose have reported clinical benefit from Vasopressin, Argipressin and Terlipressin acetate therapy [4–6]. Patients treated with ACE-I or ARBs are at a high risk of peri-operative hypotension since RAAS blockade potentiates the effects of anaesthetic agents. Terlipressin acetate has been used to safely counteract this peri-operative hypotension [6–9]. This data supports the safety profile of terlipressin acetate and its use in patients with circulatory shock caused by RAAS dysregulation.

We suggest that through its actions on V1a and V1b receptors, terlipressin causes rapid recovery from circulatory shock by vasoconstriction and ACTH secretion from the anterior pituitary gland [10]. Terlipressin’s action at purinoreceptors (P2 subtype) will mobilize myocyte intracellular calcium and effect positive inotropy. Though these mechanisms at purinoreceptors is not well understood, we postulate that in context of CCB overdose, P2 receptor activation by terlipressin causes an increase in inotropy [11].

The second and unexpectedly profound effect of terlipressin we observed was the reduction of polyuria exacerbated by loop diuretic overdose; presumably through actions on renal V2 receptors [10]. Usually, Vasopressin and terlipressin have a significantly lower affinity for the V2 receptor in comparison to desmopressin. However, our finding that terlipressin is advantageous in loop diuretic induced polyuria has not been described elsewhere before.

As authors of this case report we can confirm the following details.

Ethics approval and consent to participate: We submitted to the local ethics committee and received consent from the patient involved to participate.

Availability of data and material: The datasets used during and/or analysed during the current study are available from the corresponding author on reasonable request.

© 2020 Timothy Chimunda. This is an open access article distributed under the terms of the Creative Commons Attribution 4.0 International License (CC BY-4.0).