LADA is characterized by adult-onset and circulating autoantibodies e.g., glutamic acid decarboxylase (GAD-65). LADA may be misdiagnosed, as it has features of both Type 1 and Type 2 diabetes. Dipeptidyl Peptidase-4 (DPP-4) (CD26) is a transmembrane glycoprotein immunomodulator causing a Th1/Th17 dominant milieu while suppressing anti-autoimmune Th2/Treg expression. Th1 and Th17 secrete pro-inflammatory cytokines that mediate ß cell autoreactivity. DPP-4 inhibitors (DPP4I), e.g., sitagliptin (S), preserve ß cell function via immune and incretin effects, resulting in higher C-peptide levels, suggesting their potential use in LADA. Vitamin D has been reported to alter the immune milieu in a more tolerogenic direction as well. Sustained remission of Type 1 diabetes was reported in 2 patients with S and Vitamin D, leading us to explore their use in LADA.

LADA typically has an onset in the third or fourth decade of life in contrast with Type 1 diabetes (T1DM), which more often has an earlier onset. Like Type 2 diabetes (T2DM), it may often be managed for years without exogenous insulin. Generally,  people with LADA are leaner at onset than those with T2DM [1–2]. Since DPP-4 is an immunomodulator (CD26) enhancing Th1/Th17 expression while reducing Th2 and Treg expression, it seems reasonable to speculate that DPP-4 inhibitors, e.g., sitagliptin, could reverse these effects and, in so doing, ameliorate autoimmune disorders such as T1DM and LADA. Vitamin D is reported to affect cytokine expression in a direction complementary to that of DPP-4 inhibitors [3–5]. Furthermore, Vitamin D has been reported to prevent the development of autoimmune disorders in preclinical studies [4]. It is of critical importance to share this case, because, although it is not the first reported case of LADA to be treated successfully with sitagliptin and vitamin D, it is one of a very small number of reported cases of autoimmune diabetes ameliorated with this relatively benign and affordable therapeutic approach. Although other positive and negative responses to the combination of a DPP4I and vitamin D have been reported with varying doses and autoimmune diabetes duration, vide infra, until a large, prospective, randomized, double-blind trial is performed it remains critically important to report the results of this still largely unknown therapy in individual patients.

Our patient is a 45-year-old Hispanic woman with a two-year history of diabetes mellitus with no known complications. The patient gave her written, informed consent for publication of her case history. She was presumed to have T2DM and was first treated in a general medicine clinic with diet, exercise, and metformin, starting in 07/2016. At diagnosis, BMI was 16.16 kg/m², fasting serum glucose was 261 mg/dl, and hemoglobin A1c (HbA1c) was 10.5% (<5.7). Glipizide and basal/bolus insulin (insulin determir 10 units at bedtime; insulin aspart 5 units 3x/day before meals) were added in 08/2016. On 10/06/2016 C-peptide was 0.7 ng/ml (0.9–7.1) and serum 25-OH-Vitamin D was 25.3 ng/ml (30.0–100.0). On 12/11/2017, fasting serum glucose was 130 mg/dl, GAD-65 antibody titer was 54.9 nmol/L (<0.02), and her islet cell antibody (ICA) titer was 40 JDF units (<5). Her age of onset, clinical course, and serology was consistent with LADA. She also has treated post-I-131 hypothyroidism from the treatment of Graves’ disease and is currently euthyroid. In 01/2018, recognizing that she had either T1DM or LADA, S 100mg daily + ergocalciferol 50,000 IU weekly were added to her regimen. She has been continued on the same insulin regime until the present. On 04/05/2018, the C-peptide level rose by 29%, the GAD-65 antibody fell by 48%, ICA titer remained at 40 JDF units, and HbA1c fell to 5.8%. When seen by her primary care provider in April 2018, S was discontinued. Subsequently, HbA1c rose by 7% on 07/10/2018; her fasting serum glucose was 134 mg/dl. On 07/17/2018 S was restarted in the endocrine clinic while continuing ergocalciferol. As of 10/03/2018, her fasting serum glucose was 140 mg/dl, GAD-65 antibody had declined further to 21.1 nmol/L, her ICA had become undetectable at <1.4 JDF units, and her HbA1c had declined to 5.4%. Her serum C-peptide concentration had declined to 0.5 ng/ml (Table 1), however, since HbA1c declined concomitantly (which would reduce any longer-term glucose toxicity) with no increase in insulin dose or the dose of any other anti-hyperglycemic medication (despite an increase in BMI to 23.13 kg/m2) her simultaneous fasting glucose of 140 mg/dl was neither hypoglycemic nor likely high enough to result in significant acute glucose toxicity, we believed the latter to be due to an improvement in insulin sensitivity rather than due to a decline in ß-cell number or function. 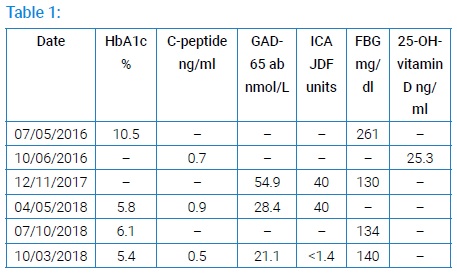 Our patient achieved a normal HbA1c without an increase in insulin dose while the level of GAD-65 antibody dropped from 54.9 nmol/L to 21.1 nmol/L , and islet cell antibody fell from 40 JDF units to undetectable. Serum C-peptide rose from 0.7 ng/ml to 0.9 ng/ml and then fell to 0.5 ng/dl as insulin sensitivity possibly improved (Table 1). The possible increase in insulin sensitivity occurred despite the fact that the patient’s weight and BMI had not decreased and could be due to a decrease in glucose toxicity. At her most recent endocrine clinic visit, the resident physician seeing the patient discontinued sitagliptin. It has since been resumed. Glipizide was discontinued at her second visit to the endocrine clinic.

This report supports earlier studies suggesting that S+D may be useful options in LADA or T1DM of relatively short duration [5–8]. Reports of successful treatment of LADA with saxagliptin, reduction of thyroid autoantibody titer in Hashimoto’s thyroiditis, and treatment of psoriasis with S suggest that immunomodulation may be a DPP4I class effect useful in prevention/treatment of autoimmune disease in general [5,8–11]. It is likely that DPP4I and D achieve their observed clinical effects via rebalancing the immune system milieu from a Th1/Th17 dominant state toward a Th2/Treg dominant one [3–11]. DPP4I also has an incretin effect due to prolonging the survival of glucagon-like peptide-1 (GLP-1) and gastric inhibitory peptide (GIP) in the circulation [11–13]. Preclinical studies have shown that D supplementation prevents the development of a number of autoimmune conditions, e.g. inflammatory arthritis, autoimmune thyroiditis, and T1DM, which supports the possible utility of D in the management of LADA [5]. Based on successful prevention of T1DM in genetically autoimmune diabetes-prone NOD mice with S, future trials to prevent T1DM in antibody positive, non-diabetic siblings of T1DM patients with S and/or D will be of interest [11].

An interesting and exhaustive review of actions of DPP-4 inhibitors and vitamin D in the treatment of autoimmune diabetes and other autoimmune disorders was published by Pinheiro and colleagues [6]. The serine peptidase, DPP-4/CD26 is a cell surface antigen that is widely distributed, being found on macrophages, B and T cells, acinar cells, natural killer (NK) cells, epithelial cells, and endothelial cells.  Key actions of DPP-4 inhibitors on the immune system in this setting include:

In addition to these pleiotropic effects of DPP-4I on the immune system, these compounds, by inhibiting DPP-4, prolong the life and activity of the incretin compounds, GLP-1 secreted by intestinal L cells and GIP by small intestinal K cells. Both these incretin hormones increase glucose-mediated insulin secretion by beta islet cells, while GLP-1 also inhibits glucagon secretion.  Several studies suggest that GLP-1 may also reduce islet cell apoptosis and cause islet cell proliferation [12–13].

Key actions of vitamin D on the immune system in this setting include:Prevention of differentiation of B cells into plasma cells.

It is clear from these bullet points that some of the actions of these two agents overlap while some are unique to one or the other. Baseline serum C-peptide I (at least in people with T2DM) is helpful in predicting which patients are likely to respond to DPP4Is [14].

Although genotyping for the expression of the genes PAX4, KCNQ1, TCF7L2, KCNJ11, ABCC8, MTNR1B and WFS1, the main regulators of incretin-mediated actions (in patients with Type 2 diabetes), may help predict which patients are likely to respond to a DPP4I [15], this was not performed in our patient as it seemed apparent by her first visit after starting sitagliptin that she was responding to the combination therapy.

Cernea and colleagues discussed the potential role of the HLA genotype in predicting the response to immune interventions in LADA [16]. The benefit of immune manipulation in LADA in protecting the remaining ß-islet function may be affected by a number of factors including age at diagnosis, glycemic control, and extent of ß-cell islet loss. The latter is affected by the HLA genotype.  Whether different  LADA-associated HLA genotypes may affect the outcome in terms of ß-islet function is currently not known; however, recent data suggest that people possessing  moderate- or low-risk HLA genotype, as is typical in people with LADA, have a more residual ß-cell function. It may be that LADA patients with such genotypes derive greater benefit with respect to ß-islet protection from immune interventions. Again, we did not request HLA genotyping in our patient because she appeared to be responding well to our intervention at her first follow-up visit.

Spoletini et al. studied the relationships in people with newly diagnosed T1DM between low and high-risk HLA genotypes with particular reference to HLA-DRB1* and DQB1*, and residual ß-islet cell function as indicated by HbA1C, insulin requirement, and serum C-peptide at diagnosis and then every three months x 12 months [17]. Fasting C-peptide in people with low HLA genetic risk was significantly higher compared with people with moderate or high HLA genetic risk from the time of diagnosis up to 1 year (P = 0.007 and P = 0.0002, respectively). Nevertheless, the changes in serum C-peptide concentrations over a one year period did not differ significantly between people with T1DM with different HLA genotypic risks.

Studies of the effects of DPP-4 inhibitors on the weakening of certain immune processes and improvement of ß-cell function based on experimental studies have had provocative results. One study reported on a trial of DPP-4 inhibitors’ efficacy in a group of 25 people with long-standing type 1 diabetes. Significant weight loss, decrease in LDL, and reduced insulin requirements were found. It was pointed out that DPP4 inhibitors may be effective in patients with type 1 diabetes. However, additional, long-term studies are necessary. In another study, sitagliptin, a dipeptidyl peptidase-4 inhibitor, was used successfully to decrease post-meal glucose concentrations in young patients with type 1 diabetes. It was concluded that sitagliptin could be considered as an adjunctive treatment in a closed-loop setting.

Another study evaluated the change in mechanisms of counter-regulation in hypoglycemia due to DPP-4i in patients with type 1 diabetes. Findings included significantly increased active levels of glucose-dependent insulinotropic polypeptide and GLP-1. No significant differences were reported for glucagon or adrenergic counter-regulatory responses. However, it attenuated the growth hormone response during late hypoglycemia.

Otto-Buczkowska has also reviewed the use of metformin in children with both TiDM and insulin resistance [19]. Besides metformin’s well-known effects of attenuating insulin resistance, it has been shown to have an indirect incretin-like effect.

Otto-Buczkowska and Chwalba reviewed the association of vitamin D deficiency with insulin resistance, T2DM, diabetic complications, and gestational diabetes [20]. Normalization of serum vitamin D in pregnant women, not later than the end of the first trimester was recommended. These findings are consistent with what we reported in a recent focused review [21].

© 2020 Alan Sacerdote. This is an open access article distributed under the terms of the Creative Commons Attribution 4.0 International License (CC BY-4.0).