The concept of general pathology is cornerstone for the theoretical medicine. In addition to the General Human Pathology we have managed to discover General Pathology Markers (GPM), which are sensitive to all types of diseases. Using GMP enables us to find a strict quantitative boundary between organism’s normal and pathological conditions.

The concept of general pathology is cornerstone for the theoretical medicine. “General Human Pathology” proceeds from the recognition of human organism’s highest complexity and interdependency of all its organs and systems [1]. It is aimed at the normalization of the organism as a whole, and not its separate parts according to the specific markers of particular illnesses.

In addition to the “General Human Pathology”, we have managed to discover General Pathology Markers, related not to individual organs, but to the human genome, which is present in all the   cells of the body [2]. The above-mentioned markers have proved to be sensitive to all types of diseases, both inherited and acquired, induced by biological, chemical and physical pathogenic factors. When guided by the general pathology markers, it is possible to implement the principle of Hippocrates, “to treat the patient, not illness” in practice.  Human genome is a novel therapeutic target!

To eliminate therapeutic complications, it is possible to use the huge experience of modern medicine in disease treatment, taking control of doctor prescriptions.  For this purpose it is required to assess how the general pathology markers, which are sensitive to all diseases, are influenced by a single medication intake or the manipulation ordered to treat diagnosed illness. In the case of positive influence, the principal “to treat both patient and illness” does work.

Using general pathology markers enables us to find for the first time a strict quantitative boundary between organisms normal and pathological conditions. This boundary is established by the level of certain set of genome protein products in leukocytes. Values of 53K/H2A<0.25 and 43K/H2A>1.61 correspond to normal genome. The 53K and 43K is the content in leukocytes of proteins with molecular weights of 53 kDa and 43 kDa, H2A is the content fraction H2A-histone in leukocytes. Guided in the process of treatment not by patient’s feelings or the indicators of individual illnesses, but by the genome normalization according to general pathology markers, we use in treatment the “human body’s secret wisdom” contained in the genome.

As an example of how genome works, we can report a medical case with female patient of the Oncology Research Center attached to the USSR Academy of Medical Science. She was diagnosed as having lung carcinoma and uterus cancer with metastases. At the stage of radiation exposure of the uterus the blood leukocyte genome has returned to a normal. The patient’s family made the decision to stop prescribed long treatment. As a result, she is still alive since 1989.

The genome capabilities to protect the organism, formed according the genome program, are demonstrated by the fact, that many hereditary diseases linked to local  DNA defects become clinically manifest at a very late age, when the   above mentioned genome capabilities have been weakened by pathological effects.

When analyzing a blood sample taken from a newborn child’s umbilical cord, cut during the birth, for the content of general pathology markers in the leukocytes, we can:

Providing the service of Human Genome General Pathology Monitoring is nowadays the only guarantee of successful treatment of all acquired diseases in the patient. The doctor has an opportunity to strictly and quickly supervise the patient’s reaction to a single therapeutic intervention and stop treatment only when the genome’s condition is normalized, i.e. given the optimum balance of all systems in the organism.

The administration of a city, region, or a state can have an objective picture of human resources condition, pathogenesis of the populated areas, environmental stress, and the efficiency of the established systems of public health, sanitation and hygiene. On the basis of General Pathology Genome Monitoring an opportunity arises to control and improve the population safety system, to increase labor productivity, living standards, and decrease expenses for unproductive long-lasting treatment of chronic patients and invalids. 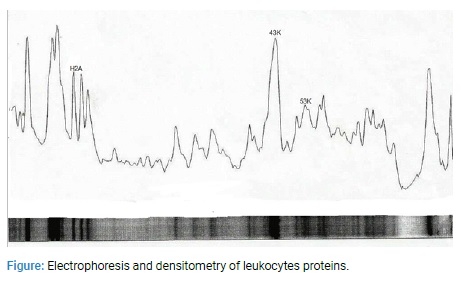 © 2020 Paponov VD. This is an open access article distributed under the terms of the Creative Commons Attribution 4.0 International License (CC BY-4.0).