Demodicosis is a common parasitic infection of the pilosebaceous unit caused by Demodex mites. This is the case of facial demodicosis of atypical presentation that appears as a unilateral erythemato-squamous plaque, whose initial possible diagnosis was seborrheic dermatitis and seborrheic pemphigus. The skin biopsy revealed an increased number of Demodex organisms in the pilosebaceous unit. Our patient was treated with topical metronidazole, topical tacrolimus, and oral ivermectin, and showed notorious improvement of his dermatosis.

Demodex mites, such as Demodex Folliculorum (DF) and Demodex Brevis (DB), are common infections in humans. D. folliculorum is frequently located in the follicular infundibulum, while D. brevis is more likely to be found in the sebaceous and meibomian glands [1]. D. folliculorum is the most common ectoparasite present in humans, and, as a saprobiont, it lives in the pilosebaceous follicles of healthy skin.

It is frequently found in seborrheic regions of the face, such as cheeks (as in this case), nose, chin, eyebrows, scalp, neck, and ears. Furthermore, it can also be found in the philtrum, the periorbital region, and less frequently in the higher middle trunk and back [2].

A 40-year-old man, with no previous clinical conditions, consulted a dermatologist because he had a facial dermatosis that had appeared four years ago. It had had an abrupt onset and had extended quickly throughout the affected area. It was primarily interpreted as seborrheic dermatitis, and received treatment for such dermatosis, but showed no clinical improvement. Subsequently, he had another appointment with his dermatologist, and this time his condition was thought to be seborrheic pemphigus. This is a pruritic skin condition characterized by remission and flares of disease activity, episodes of stress trigger that. The patient denied having episodes of flushing or photosensitivity.

The patient came to our clinic due to the lack of improvement of his condition and the persistence of its symptoms. After being examined, a skin biopsy was programmed for direct immunofluorescence and hematoxylin and eosin. 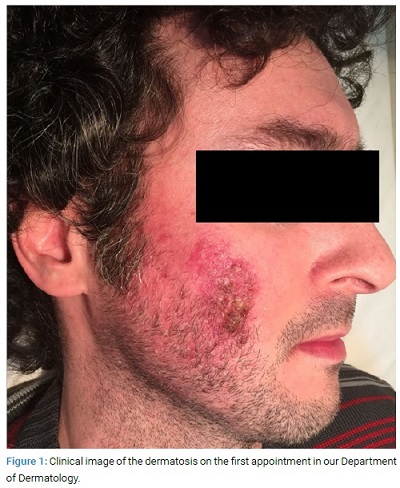 Histopathology: A biopsy was performed for H and E (Figures 2,3) and Direct Immunofluorescence (DIF). The H and E stain showed thick stratum corneum, and mucous membrane and a perifollicular lymphocytic infiltrate extending up to the follicular unit with Demodex’s presence. There was also an increased number of these organisms in the pilosebaceous unit.

There were no intercellular epidermal fluorescent deposits present with any of the antibodies (Figure 4). 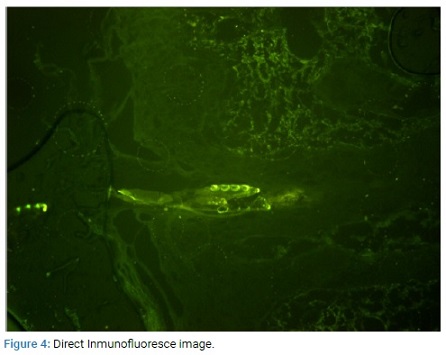 Diagnosis: Demodicidosis, ruling out the possibility of seborrheic pemphigus.

Evolution and treatment: Metronidazole Gel 0.75% once a day and tacrolimus ointment 0.1% (once a day) was indicated and a one- time dose of ivermectin 200 μg per kg, orally administered. With  this treatment, the patient showed notorious improvements in 30 days (Figure 5). 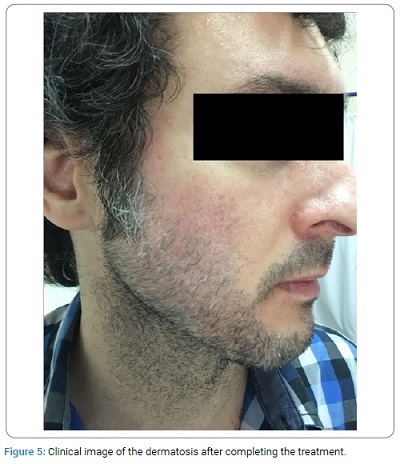 Even though demodicidosis has been associated with roseacea, it is clinically different: the scaling of the Demodex-caused infection is superficial, follicular, and shows small papulopustular and vesiculopustules [3]. Moreover, this condition has an abrupt onset; it is rapidly progressing and does not have a history of flushing, erythrosis, or photosensitivity. The absence of significant spider veins, the asymmetrical distribution, and previous use of corticosteroids can help determine the diagnosis of demodicosis [3]. All these factors were present in our patient.

In this situation, the diagnosis was achieved using a punch biopsy, which revealed the presence of Demodex organisms, and a perifollicular lymphocytic infiltrate that extended up to the follicular unit. Furthermore, a study with Potassium Hydroxide (KOH) could have been performed to establish the diagnosis of demodicidosis, but unnecessary [5].

Many pathogenic mechanisms have been proposed for these organisms, including the blockage of the sebaceous ducts and the follicular units due to hyperkeratinization and epithelial hyperplasia produced by the mites; the role of bacteria as vectors; a foreign body granulomatous reaction to the mite’s chitin skeleton; the stimulation of the humoral and cellular immune response of the host by the mite and its residues [3].

For a long time, the patient has been diagnosed with several different dermatosis, initially seborrheic dermatitis, and subsequently seborrheic pemphigus. As a consequence, he has been treated with topical ketoconazole and topical corticosteroids and showed no clinical response.

Many treatments have been used effectively for demodicidosis, including permethrin cream, metronidazole gel, and oral ivermectin, among others [5].

Once the patient was examined in our Clinic, treatment with topical metronidazole, topical tacrolimus, and oral ivermectin was instated.

Ivermectin is a semi-synthetic byproduct of Streptomyces avermitilis, a potent disaccharide antiparasitic agent made of macrocyclic lactone in the treatment of infections caused by parasites in humans and animals [6].

This drug is active against external and internal parasites and has been effective against arthropods, insects, nematodes, protozoa, and widely used in the treatment of scabies in immunocompetent and immunocompromised patients [6]. In this case, a single dose of ivermectin (200 μg/kg) leads the patient to a rapid clinical improvement of his dermatosis.

This case has been reported due to its atypical presentation, emphasizing the importance of always having demodicidosis in mind as a possible diagnosis when observing a unilateral dermatosis located in seborrheic regions.

© 2020 Melanie Monaco, This is an open access article distributed under the terms of the Creative Commons Attribution 4.0 International License (CC BY-4.0).