The Dermoid Cyst of the Auricle

Dermoidcysts of the auricle are extremely rare. A 13-year-old female patient was admitted to our clinic with the complaint of a painful, slowly growing mass that had been present behind her right ear since birth. Ear examination revealed a soft, approximately 2 cm x 2 cm cystic mass on the posterior aspect of the right auricle. Histopathological examination of the excised mass was reported as dermoid cyst. The patient, who had no problem after the operation, was called to the controls and discharged. We present this case because dermoid cysts of the auricle are extremely rare and should be considered in the differential diagnosis of congenital masses in children.

Dermoid cysts are present at birth and predominantly occur in men. They are asymptomatic, slow growing, single cavity cystic masses. Mostare in ovaries [1]. Less than 7% appears in the head and neck region [2]. The most common location in the head and neck region is fronto-orbital, in the upper outer part of the orbita. Other settlements are the midline of thenose, the neck, the sublingual region and the sternal, perineal, scrotal and sacral regions [3].

Dermoid cysts trapped in the ectoderm sac next to normal folds or surface is an developmental disorder caused by the failure of the ectoderm to leave the neural tube [4]. The most valid theory about the dermoid cysts was proposed by New and Erich that was the persistence of the germ layers at birth, along the embryonic fusion line in the deep tissues in the neck. Their regular growth and differentiation of these cells causes the appearance of dermoid cysts. Dermoid cysts are divided into 3 histological types: epidermoid, dermoid and teratoma. Epidermoid cysts contain laminated keratin materials and does not contain a sebaceous gland around. Dermoid cysts are surrounded with a stratified squamous cell epithelium and they are subcutaneous tumors, and they contain various types of skin supplements such as hair follicle, sebaceous gland and sweat glands. Teratomas originate from totipotent cells, contain all three embryonic germ layers and are true neoplasms [4].

Thirteen-year-old female patient with a mass complaint in the right auricle admitted to the Otorhinolaryngology out patient clinic of Kadirli State Hospital. The patient’s mother told that the mass existed since the birth of the child. She stated that the mass was small and painless at the beginning. For the past few years the mass was growing and became painful. In the otorhinolaryngologic examination of the patient, there was a soft, painless, cystic mass in the posterior part of the upper inner quadrant of the right auricle just lateral to the sulcus. The mass was about 2 cm x 2 cm in size. The mass is totally excised under local anesthesia. In the macroscopic examination of specimen, the cyst was surrounded by a stratified squamous cell epithelium and the hair follicles were seen in the lumen. (Figure 1) In the 4 x 10 microscopic examination with hematoxylin-eosinophil stain the cyst was surrounded by the stratified squamous cell epithelium and sebaceous glands were present in the dermis and hair follicle structures were seen in the cyst lumen. (Figure 2,3) Histopathological examination results were reported as dermoid cyst. 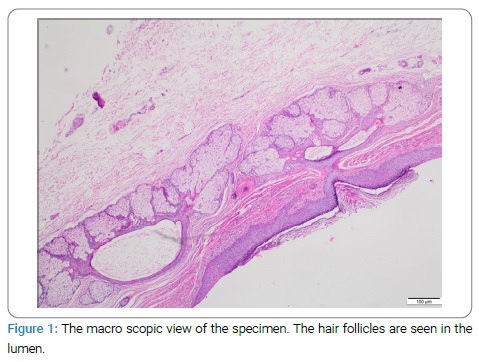 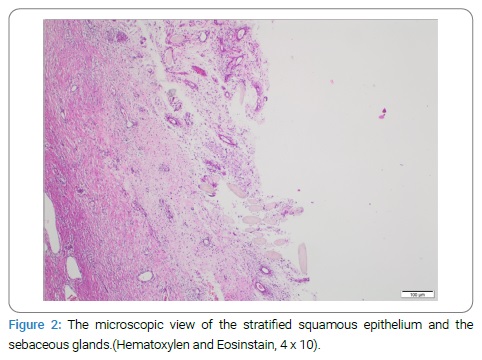 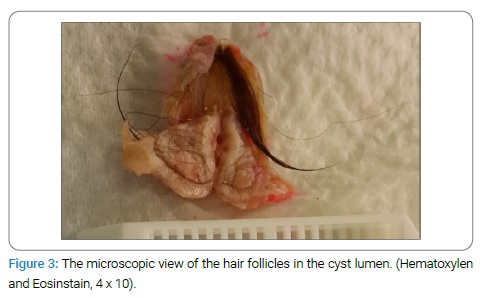 The differential diagnosis of the post auricular cyst includes the epidermal inclusion cyst, the trichilemmal cyst, the lipoma and the hemangiomas. The trichilemmal or these baceous cysts are clinically similar to the epidermoid cysts. The diagnosis was confirmed histologically by the presence of the amorphous keratin material in the cyst cavity. The lipomas are common benign soft tissue adipose tumors and are similar to the dermoid cysts. Hemangiomas are present at birth and are benign tumors of the vascular endothelium and spontaneous involution is possible [8].

The treatment of the dermoid cyst is removal of the the cyst wall with complete surgical excision. If it is not removed, it may result in relapseor infection [10]. The treatment prevents the conversion to malignancy.

As a result, the dermoid cysts are rare, usually benign are very rarely malignant. They are congenital masses that can show transformation and can be seen in many parts of the body. They must be considered in the differential diagnosis of congenital ear mass especially in the children.

© 2020 Sidika Deniz Yalim. This is an open access article distributed under the terms of the Creative Commons Attribution 4.0 International License (CC BY-4.0).