Although pertussis alone is a disease that usually has a benign course and a favorable outcome, we must keep in mind that children can have a respiratory viral coinfection associated with a pertussis infection. Mixed respiratory tract infections may be responsible for more severe disease. The rapid microbiological analysis contributes to their adequate diagnosis and timely treatment.

Pertussis, or whooping cough, is a highly contagious disease of the respiratory tract caused by Bordetella pertussis (B. pertussis). The infection is especially dangerous in newborns and infants and is a major cause of mortality in those age groups in developing countries [1]. Although pertussis is a vaccine-preventable disease, it remains a threat to public health, with frequent outbreaks worldwide [2]. According to the World Health Organisation (WHO), 143,963 cases of pertussis were reported in 2016 in the world. At that time, global coverage of the vaccine was 85% [3]. In regards to the world situation, 98 cases of pertussis were diagnosed in 2016 in Bulgaria. This was higher than in the previous year, with 35 cases [4].

There is ample evidence to confirm co-infections between B. pertussis and other pathogens, especially viruses. However, the role of such co-infections remains debated [5–7]. Although there is no agreement yet, discovering new agents of infection might be an important contributor to disease severity, management, and prognosis.

We report two cases of infants in Bulgaria with evidence of B. pertussis infection, combined with a viral infection. The cases illustrate the difficulties that arise in recognizing the presence of more than one pathogen, as well as emphasize the need for precise microbiological diagnosis. Our objective is to study and analyze viral co-infection with B. pertussis and its relationship to clinical severity.

Two Bulgarian girls, aged 2 and 9 months, respectively, and born in the South-Central region of the country, are presented. Both children were hospitalized at “St. George” University Hospital, Plovdiv, and diagnosed with B. pertussis and viral co-infection. Multiplex PCR Film Array detected the pathogens - MPCR (Biofire, France) in the Department of Microbiology and Immunology at Medical University of Plovdiv. The pathogens were confirmed by Real-Time PCR (RT-PCR) in the National Center of Infectious and Parasitic Diseases (NCIPD) in Sofia, Bulgaria.

Our first patient, a 2-month-old female infant, presented with predominantly nocturnal paroxysms for three weeks. Her mother also reported facial discoloration during coughing episodes. The patient was treated by her primary care physician two weeks earlier, but the symptoms did not improve. The patient did not have her vaccination against pertussis completed.

Physical examination findings contributed little to the diagnosis. The patient was afebrile and did not have signs of lower respiratory tract disease. The blood analysis revealed leukocytosis and increased C-reactive protein levels. Lymphocytopenia was observed, which is not typical for pertussis. The laboratory results are shown in (Table 1).

The MPCR analysis using Respiratory Panel yielded a positive result for B. pertussis and Human rhinovirus (hRV1-4). The results were confirmed by the Bulgarian National Center of Infectious and Parasitic Diseases.

The second patient, a 9-month-old female infant, presented with fever (38 degrees Celsius), lethargy, and persistent cough. Physical examination findings revealed an enlarged heart and respiratory rates of 186 bpm and 42 breath per minute, respectively. The lungs presented with diffuse crackles and expiratory wheezes. The blood analysis revealed leukocytosis and increased C-reactive protein levels. In contrast to the first case report, lymphocytosis was observed in this patient. The laboratory results are shown in (Table 1). 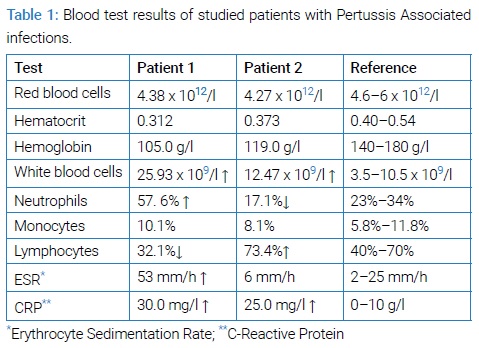 The MPCR analysis was positive for B. pertussis, coronavirus 229E, and human rhinovirus (hRV1-4). The Bulgarian National Center of Infectious and Parasitic diseases confirmed our results and also reported Human bocavirus (HBoV) infection, which is not in the Film Array MPCR spectrum. The toddler was transferred to our infectious diseases department. This child as well had not been given the vaccine containing pertussis antigen.

Learning more about viral coinfection and their role in Pertussis disease severity would make it easier to provide the necessary care for infants with pertussis. In the second clinical case, we proved a coinfection of bocavirus (HBoV), coronavirus, hRV, and B. pertussis for the first time. However, these findings are difficult to interpret, given the scarce data on this type of coinfection in the scientific literature.

HBoV, a member of the family Parvoviridae, is a recently recognized respiratory virus. It was first identified in 2005 in clinical specimens from infants and children with respiratory tract illnesses. Since then, HBoV subtypes have been found worldwide, without any regional, geographic, or border restrictions [8]. It is interesting to note that Allander et al. detected HBoV only in infants and children. However, this may be a result of testing fever specimens from adult patients [9]. The most common cause for HBoV-infected children to be hospitalized was respiratory distress and hypoxia associated with a diagnosis of bronchiolitis. Arnold et al. reported that 19% of all identified HBoV-infected patients had a paroxysmal cough, which in association with pertussis would aggravate the clinical picture [10]. However, the possibility of HBoV being asymptomatic in humans cannot be ruled out, since samples from healthy individuals have not been tested. More comprehensive studies with data on prevalence and risk factors are needed to determine the role of HBoV.

In pertussis-like respiratory infections, once the laboratory has confirmed pertussis, other potential causative pathogens are usually overlooked [11]. For example, Piedra et al. identified by RT-PCR only 4 B. pertussis cases in 2068 patients with respiratory pathogens. All these infants were younger than six months. In 3 out of 4 infants with B. pertussis, RT-PCR identified a second respiratory pathogen: 2 had an hRV and one child an hCoV coinfection [12]. The role of rhinoviruses and coronaviruses in children with whooping cough is not well understood.

Several studies have suggested that coinfections with viruses do not change the severity of the clinical picture of pertussis patients [11–13]. A study from the Netherlands conducted in recent years by Wildebeest et al. found hRV in 25% of asymptomatic children [13]. A new finding in this study is the lack of differences in clinical disease severity (measured as clinical severity score and days hospitalization) in infants with B. pertussis infection alone and those with coinfections. Nuolivirta et al. studied 142 infants aged less than 180 days who were hospitalized for bronchiolitis and underwent a nasopharyngeal aspirate. B. pertussis involvement was found in 12 out of 142 (8.5%) infants hospitalized for bronchiolitis, and, of these, eight were co-infected with RSV. They found no differences in clinical findings, days hospitalization, and breastfeeding at admission in patients with respiratory viruses alone compared to patients with respiratory viruses in combination with B. pertussis [14].

On the other hand, mixed respiratory tract infections may be responsible for more severe illness. In fact, there is evidence that a viral or bacterial coinfection is associated with disease severity in children hospitalized for pertussis [15]. This is confirmed in the study by E. Petridou, who argues that the length of hospital stay was significantly longer among children with a mixed infection in comparison to those with Bordetella spp. infection alone [16]. In addition, a retrospective cohort study in Brazil of all pediatric hospital admissions with pertussis found similar results. Palvo et al. found that over a 6-year time frame, a coinfection with a respiratory syncytial virus was more frequent in patients who died when compared to survivors (50% vs. 10%; p = 0.03) [17].

The presence of more than one pathogen in a patient diagnosed with pertussis can have an important diagnostic and prognostic role. In particular, viral coinfections may contribute to the clinical severity of pertussis in infants. In such a case, the detection of B. pertussis and coinfections in children is essential to their early treatment. Rapid microbiological analysis with multiplex PCR allows a timely, adequate diagnosis and treatment of patients before serious complications occur. Ultimately this approach could be helpful in preventing the onset of outbreaks.

This work was supported by the Bulgarian Ministry of Education and Science under the National Research Program “Young scientists and postdoctoral students” and the National Program of “Biobanking.”

Gergana B Lengerova: A principal investigator involved in laboratory data collection and analysis of patients presented in this publication and prepared the manuscript.

Nelly B Radeva: Analyzed clinical data, and she wrote the first draft of this manuscript.

Yordan I Kalchev: involved in laboratory data collection and analysis.

Radka T Komitova: physician of patients presented in this publication.

Marianna A Murdjeva: involved in the manuscript design, revising the manuscript critically for important intellectual content, and giving the version’s final approval to be published.

© 2020 Marianna A Murdjeva. This is an open access article distributed under the terms of the Creative Commons Attribution 4.0 International License (CC BY-4.0).