Do We Need to Increase Factor VIII to Target Level before Surgical Intervention?

Hemophilia A is a bleeding disorder characterized by a decreased level of factor VIII inherited by the X chromosome. Preoperative and postoperative planning is crucial in the presence of fractures requiring surgical treatment in hemophilia patients. A 16-year-old adolescent hemophilia A patient with a trivial fall on his left elbow applied to the emergency room, and a Mayo type 2A olecranon fracture was detected. 40 IU/kg Factor VIII replacement was performed since the preoperative level was 8%. It was increased to 17%, and open reduction and internal fixation with tension band technique were applied. In the postoperative period, 40 IU/kg Factor VIII replacement was performed for five days, and when it was increased up to 24%, the patient was discharged. After six months of follow up, it was observed that there was no pain and complete healing on the fracture site, and the full Range of Motion (ROM) of the elbow joint was achieved. The desired outcome in the treatment of fracture requiring hemophilia patients surgery can be accomplished with a multidisciplinary approach during preoperative planning, and postoperative follow up.

Hemophilia is a congenital bleeding disorder inherited by the X chromosome due to a coagulation factor VIII (in hemophilia A) or factor IX (in hemophilia B) deficiency. Despite being a multisystemic disease affecting the entire body, musculoskeletal involvement is more commonly seen as synovitis and arthropathies in the joint [1]. Fractures are much less common due to the low ambulation and physical activity of these patients. However, fractures secondary to disuse osteoporosis can be seen in hemophilic arthropathies [2–3]. There are no literature studies that reveal the frequency of fractures due to simple trauma in hemophilia patients. Replacement of factors in fracture treatment should be done as soon as possible to prevent complications such as compartment syndrome [1].

A 16-year-old male patient, followed by a pediatric hematologist because of hemophilia since he was 13-year-old, applied to the emergency room after a trivial fall on his elbow during a football match complaints of pain, swelling, and limitation of movement at his left elbow. Physical examination revealed an ecchymosis and flexion contracture at the left elbow with the inspection. He had palpable defect and pain over the olecranon. Active flexion, extension deficit, supination, and pronation were 90º, 15º, 40º and 50º, respectively. There was no acute compartment syndrome findings or neurovascular deficit. It was found that he had a Mayo type 2A olecranon fracture in X-ray (Figure 1). 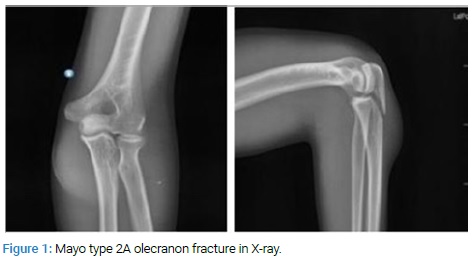 After immobilization in 45º flexions with long arm splint at the emergency room, he was hospitalized in an orthopedic inpatient clinic for further examination and follow-up. Pediatric and hematology departments were consulted for preoperative preparation [2]. Since the factor VIII level of the patient was measured as 8%, it was replaced with 40 IU/kg (1 x 3000 IU) factor VIII preoperatively, and it was increased to 17%. Factor VIII inhibitör was negative. Upon approval of the hematology department at this level, the patient was operated at the end of the first week.

Under general anesthesia, the patient was placed in a supine position with the shoulder adducted, and elbow flexed across the torso, stabilized by an assistant, a well-padded armrest.

A tourniquet, placed around the proximal arm and posterior approach with strict bleeding control, was used. The fracture was reduced, and temporary fixation was achieved with reduction forceps. Stable fixation was achieved with tension band wiring technique. The operation lasted about 40 minutes, and a Penrose drain was used. Red blood cell transfusion was not needed intra-operatively. Longarm splint was applied in 45º flexions.

The patient did not require any blood transfusion postoperatively. He underwent a factor VIII replacement for five days with 40 IU/kg (2 x 1500 IU) as secondary prophylaxis with hematologist recommendations and was discharged at the end of the postoperative first week with a 24% factor VIII level and no wound problem. Sutures were removed in the second week of operation, and active ROM was started with pain tolerance. Callus started to be seen on X-ray at the 6th weeks of control, there was no pain with palpation on the fracture site, and there was not any limitation of movement in any direction (Figure 2). 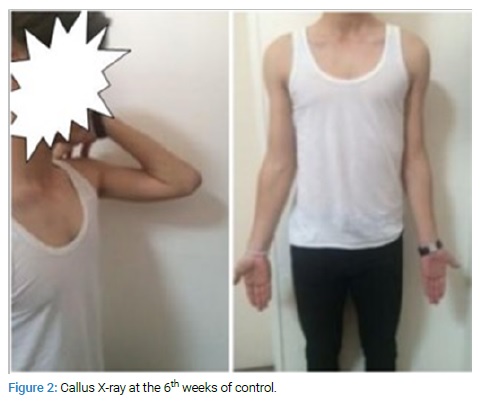 In the sixth postoperative months, he complained about irritation due to wire migration, and implants were removed without any complication (Figure 3).

Cases with acute compartment syndrome have been reported in hemophilia patients with fractures after trauma, and studies on their treatment have been published previously [2]. Nevertheless, studies on the treatment of these fractures and follow up procedures after trivial falls are rarely available in the literature. We planned to discuss the preoperative, intraoperative, and postoperative treatment of the olecranon fracture after a trivial fall in Hemophilia A patient with this study. The patient was followed for seven days preoperatively to prepare for surgery and five days after the surgical intervention for prevention of surgical complications, and six months after the discharge. Although there is no standard approach about the surgical follow-up of hemophilia patients in the literature, according to the World Federation of Hemophilia guideline, the preoperative target value for hemophilia A in the minor surgical procedures is 50 IU/dL–80 IU/dL, whereas postoperatively (post operative 1–5 days) it was 30 IU/dL–80 IU/ dL [3]. Our patient was operated on with a factor level of 17% with hematologist approval, and in the early postoperative period, it was increased to 24%, and the patient was discharged in this way. We observed only a 9% increase of factor VIII despite dosing with 40 IU/kg of Factor VIII, which is a very low recovery. Normal in vivo recovery is about a 2% increase for any Factor VIII unit/kg injected. One reason can be the presence of Factor VIII inhibitor; however, as reported in the preoperative preparation section, it was negative, and surgery has been performed with the approval of the hematologist. The patient did not experience any problems related to bleeding during surgery and postoperative follow-up.

Caviglia et al. reported a retrospective epidemiological study of the 27-year period revealed that lower extremity fractures were seen more frequently, but the incidence of upper extremity fractures has increased in recent years. However, it was not specifically mentioned of olecranon fractures, but ulna fractures were reported as 8.6% in all fractures, and only one of these fractures was treated surgically [4]. Techniques such as tension band wiring, compression plates, compression plates, and lag screws, lag screws, and protection plates are used in the surgical treatment of olecranon fractures [5]. The goal of surgery is to achieve an anatomic reduction of the fracture and restoration of the joint and stable fixation to allow movement as soon as possible. It should be reached for the desired purpose with the least possible invasive surgical method in hemophilia patients. In our patient, a tension band wiring technique was used, and passive exercises were started at the postoperative first week and active exercises in the postoperative second week. It was observed that the range of motion was fully obtained at the 6th week postoperatively. Our case report aims to describe a rare case of hemophilia, A adolescent patient with a fracture of the olecranon after a trivial fall. To our knowledge, this is the first article that reports fracture of olecranon with hemophilia A adolescent patient and treatment with tension band wiring.

In conclusion, additional research is needed to understand the exact level of Factor VIII for surgical intervention, and successful results can be obtained with a multidisciplinary approach including a surgeon, hematologist, and physiotherapist in spite of lower factor VIII than the target level.

© 2020 Emrah Caliskan, This is an open access article distributed under the terms of the Creative Commons Attribution 4.0 International License (CC BY-4.0).