Introduction: The Human bocavirus was identified from the nasopharyngeal aspirate specimen in 2005, that it includes four subtypes (HBoV 1–4). The HBoV-1 is a major subtype in children’s acute respiratory infections, and others (HBoV 2–4) were in stool specimens. The pathogenic role of Human bocavirus 2–4 in acute Gastroenteritis has not confirmed yet, and therefore all of the reports were done to confirmation of this issue.

Case presentation: In this report, we have a 2-month-old boy with acute Gastroenteritis admitted to Shahid Beheshti hospital of Kashan, Iran. The stool sample of the patient was tested for Human bocavirus by PCR of the NP-1 gene. The other major gastrointestinal pathogens of Salmonella spp. And Shigella spp, Giardia lamblia and Entamoeba histolytica confirmed by specialized microbiological procedures and viral pathogen of Rotavirus by ELISA technique. This case confirmed by HBoV-NP-1 positive control of cloned plasmid. All of the clinical manifestations were analyzed by pediatric nursing in the admission period in the hospital.

Conclusions: This case has been positive for Human bocavirus by PCR of the NP-1 gene of 354 bp. The major signs were diarrhea, fever, dehydration, and abdominal pain. This case dismissed the hospital after supportive therapies for dehydration. We show an important confidential chance to Human bocavirus that can be a gastrointestinal pathogen in pediatric patients and make severe diarrhea in young children. This conclusion needs further analysis in widespread studies.

The Human Bocavirus (HBoV) was identified from a nasopharyngeal aspirate specimen in Sweden by Allander in 2005, that it includes four subtypes (HBoV 1–4) [1,2]. The HBoV-1 is a major subtype in children’s acute respiratory infections, and others (HBoV 2–4) were in stool specimens [3]. The HBoV is wide-spread infections world-wide with the main prevalence of younger than three years old in children [4]. This virus is supposed to be a respiratory infection pathogen currently, but not a gastrointestinal infection pathogen, not yet [5,6]. Although most reports report this virus in fecal samples in acute diarrhea of children, that is not confirmed as a gastrointestinal pathogen [4,6]. Because of limitations in HBoV culture and animal examinations, forgive a pathogenic role to HBoV need to clinical studies and doing these reports in hospitals [4–6].

The present study was performed according to the Helsinki Declaration (Ethical Principles for Medical Research Involving Human Subjects). The research board approved it of the Ethics Committee of the Capital Institute of Pediatrics, Kashan University of Medical Sciences, Iran.

All patient data were anonymously reported. A 2-month-old boy with acute Gastroenteritis admitted to Shahid Beheshti Hospital of Kashan, Iran. There were vomiting, alternating fever, and yellow-watery feces in historical and clinical examinations in 2-days ago. This infant’s parents were reports 10–15 watery stools in the previous 48 hours, and he was quiet and pale seriously. The nursing home was protected from the infant at home every day, and his diet was milk powder only. The clinical examinations have been listed in (Table 1). 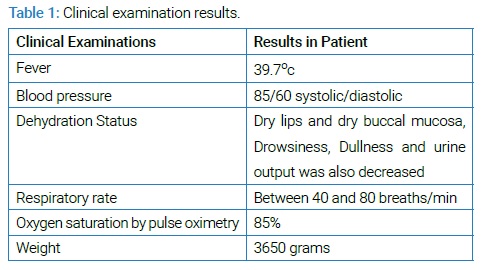 Laboratory tests showed hemoglobin 11.6 g/dl, leukocytosis with 19800/mm3 WBC (Lymphocyte 83%), Platelets 496000/mm3, C-reactive protein was positive, the erythrocyte sedimentation rate was 59, sodium concentration of 136 mEq/L and the fecal culture of Salmonella spp and Shigella spp. were negative. The stool analysis was a Yellow-Watery specimen with many WBC without any RBC and no cysts and trophozoite of Giardia lamblia and Entameoba histolytica and no eggs of worms. The stool specimen was negative for Rotavirus by the ELISA test.

In contrast of the above tests, was positive for HBoV by PCR test of NP-1 gene [7]. The HBoV detection was 354 bp fragment of NP-1 gene and confirmed by positive control of NP-1 Cloned plasmid from Tehran University of Medical Sciences (Figure 1). 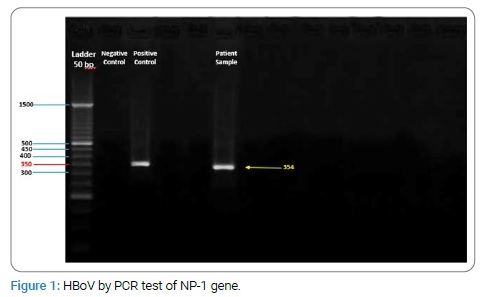 This patient obtained intravenous fluid therapy to understand better the above conditions—a solution containing dextrose 5% plus electrolytes. Digestive losses of water and electrolytes were compensated by Oral Rehydration Solution (ORS). For prevention of adding bacterial infections in hospital antibiotic treatment was done by Ceftriaxone 100 mg/Kg/day to three days. The patient was discharged from the hospital four days later.

Acute gastroenteritis in infants has the most viral and bacterial causal agents like Salmonella, Shigella, Campylobacter, Rotavirus, Norovirus, Giardia, Entamoeba histolytica, et al. [8]. The Human bocavirus represented as an acute respiratory infection agent currently, but that is a role in gastroenteritis that was not approved yet [4]. Different reports revealed HBoV prevalence rate in acute gastroenteritis in children. Most of them were dual infection with other viral agents like Rotavirus and Norovirus and Adenovirus [4–6]. No report expressed HBoV gastrointestinal infection in the unique form [9–12]. The most common clinical symptoms of the disease in HBoV positive patients in all the reports all over the world were diarrhea, fever, dehydration, vomiting, and abdominal pain [5,6].

In acute gastrointestinal infection by HBoV, a study in Pakistan in 2014, HBoV prevalence was 13% that 98% were found to be co-infected with Rotavirus. Amongst the clinical features, fever and vomiting were presenting symptoms in 89% and 87% of children, respectively [9]. The one study in Albania in 2016, shows that HBoV was detected 9.1%. All HBoV-positive patients were co-infected with other enteric viruses (98%) [10]. There was no data about the analysis of the mono-infection of HBoV properties and clinical separates symptoms in these reports.

In a study in Western India in 2017, 5.3% of samples were positive for Human bocavirus, Co-infection of Rotavirus was observed in 21% cases. HBoV infections occurred in children 12 months of age [11]. In other reports in North of India in 2016, HBoV rate was 3% with the Median age of 8 months. All the positive samples had gastrointestinal findings having diarrhea 100%, dehydration 86%, vomiting 70%, fever 62%, and severe abdominal pain 28% [12]. In these reports, there was a consider that HBoV can be a gastrointestinal pathogen, and they analyze this conception in separate parts of the report.

As like as the above hypothesis, In Iran, in Mohammadi study in Tehran, HBoV identified in 14.4% of patients with acute gastroenteritis infection. The main clinical symptoms among HBoV positive patients were diarrhea (83.3%), abdominal pain (81.9%), and vomiting (83.3%) [13].

The researchers thank the children and their parents who participated in the report.

No funding was received for this study.

The authors claim no conflict of interest.

© 2020 Mehrdad Mohammadi, This is an open access article distributed under the terms of the Creative Commons Attribution 4.0 International License (CC BY-4.0).