Pancreatic adenocarcinoma usually metastasizes to the liver, lungs, lymph nodes, or bones. However, brain metastases have also been shown in some rare documented cases and usually predict a very poor prognosis. We present the case of a 56-year-old male who was diagnosed in June of 2017 with primary metastasized pancreatic adenocarcinoma and, after a good initial response to palliative chemotherapy started to complain about headaches and altered visual acuity, with evidence of a left occipital intra-axial brain lesion, with cystic nodules and inhomogeneous contrast-enhancement. The patient underwent occipital craniotomy with total macroscopic resection of the lesion. The histopathology confirmed metastasis of the known pancreatic adenocarcinoma. With the current improvement of treatment of pancreatic cancer, and the related increase in life expectancy, it is to be expected that the incidence of brain metastasis will increase, and therefore it is important to be aware of secondary lesions in the central nervous system.

Pancreatic adenocarcinoma usually metastasizes to the liver, lungs, lymph nodes, or bones. However, in some rare documented cases, Brain Metastases (BMs) have also been shown and usually predict a very poor prognosis.

Pancreatic carcinoma is the 11th most common human cancer, for which the highest incidence and mortality rates are found in developed countries [1]. This cancer represents one of the most lethal malignancies, ranking as the seventh leading cause of cancer death in both sexes, with an overall five-year survival rate of 9% [2]. As early specific symptoms are rarely present, the pathology is often diagnosed when the primary tumor has already spread, and metastasis is present, making complete surgical resection only possible in about 20% of cases [3].

Because of this late clinical onset, with associated delayed diagnosis and the related high lethality, the cancer was usually considered a non-common pathology for BMs. Only 22 cases are reported, at the time of this article, in the English language literature [4]. Nevertheless, the evidence of CNS involvement from this specific cancer is increasing in the last decades, reasonably due to improvement in chemotherapy and immunotherapy of the primary lesion, with an increased life expectancy [5,6]. Once pancreatic cancer metastasizes to the CNS, the overall prognosis is used to being considered negative, with a switch towards a palliative treatment and it usually relates to a patient in poor or worsened conditions, or no longer responsive to the oncologic treatment [3,4]. We present a case in which a BM was found in a patient with primarily metastatic pancreatic cancer but who experienced a good response to the oncologic treatment with good quality of life.

A 56-year-old male was reported in November 2019 to our attention because of an expansive occipital lesion with altered visual acuity. The anamnesis spoke for primary diagnosis, in June 2017, of a pancreatic adenocarcinoma highly infiltrative at the pancreatic isthmus and involving the mesenteric vein, with several local adenopathies and metastasis to the lungs (cT4, cN0, cM1 - stage IV). No surgical resection was indicated, and palliative therapies were proposed, with several cycles of chemotherapy (FOLFIRINOX) and consolidation radiotherapy. The patient well tolerated the treatment, and the follow-up underlined a stable pancreatic lesion, with progressive diminution of lung nodules. The quality of life was good, and the patient was able to work. The patient started complaining of headaches and altered visual acuity 28 months after the first diagnosis in October 2019. A cerebral MRI was performed in November 2019, showing a left occipital intra-axial brain lesion, with cystic nodules and inhomogeneous contrast-enhancement. Our first hypothesis was a metastatic lesion, but according to the rarity of the pancreatic cancer’s BM, a completely new staging was performed, without evidence of new primary mass. An automated visual field test showed a right inferolateral quadrantopsy, without structural loss of the visual acuity, due to the anterior displacement of the left optic radiation (Figure 1). 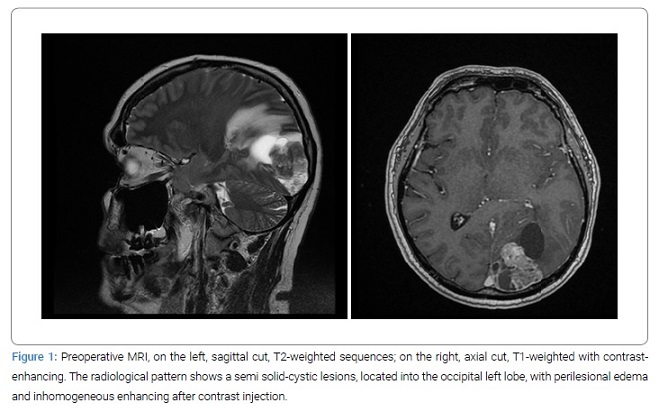 In the aim to improve the neurological deficit and to determine the histopathology (a differential diagnosis of primary cerebral neoplasm was anyway considered), the patient underwent an occipital craniotomy with cerebral neuro-navigation and surgical microscope, with total macroscopic resection of the lesion (Figure 2). 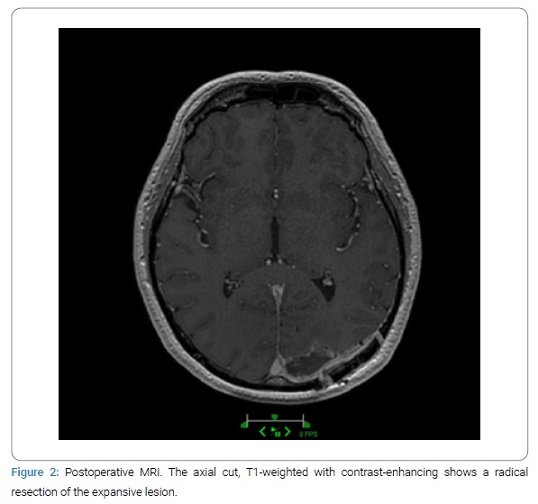 Pathological findings: Histopathological analysis of biopsy specimens showed tissues of a moderately differentiated adenocarcinoma of the ductal type, with cystic/microcystic and papillary mucinous component, highly infiltrating the meninges and brain tissue, with areas of necrosis and microcalcification. The immunohistochemical profile was compatible with brain metastasis of the known pancreatic adenocarcinoma.

Outcome: The clinical outcome was good; the patient quickly recovered from the surgical intervention, neuropsychological and ophthalmologic follow-up showed a progressive improvement in peripheral right visual function and in carrying out daily life (except driving). The patient was discharged home ten days after surgery and underwent sequent bed tumor radiotherapy. At six months follow-up, no recurrence of the cerebral lesion was noticed, and the neurological status was unchanged, with a KPS of 90/100 (Figure 3). The systemic tumor appears stable, with a survival time of 35 months since the first diagnosis, at the time of this article.

BMs occur in adulthood with a frequency varying between 10% and 35% [7,8], mainly in case of lung cancer, breast cancer, testicular cancer, and melanoma; very rarely we found BMs from gastrointestinal tumors and, among these cases, pancreatic cancer represents less than 1% of the BMs origin, according to the last decade’s literature [9]. Before ours, only 22 other cases of pancreatic adenocarcinoma-related BMs were reported in the English language literature. This usually occurs late in the clinical course, when most patients already present other remote metastasis (86% of cases, 19/22). However, 22% of patients with BMs (5/22) presented neurological symptoms as the first clinical manifestation of the primary malignancy [4].  All the authors agree that the clinical features of this disease remain elusive [4]. It was generally related to a worsening of the overall prognosis, reducing the systemic therapy’s effectiveness, reducing physical performance status due to the neurologic impairment, and switching towards a palliative treatment. Among the 22 cases collected at the best of our knowledge, only 7 (32%) survived more than six months since the diagnosis of BMs, leading to the consideration that a neurosurgical resection could play a very limited therapeutic role [4]. Besides, the literature is reported one single case of long-term survival (139 months) following surgery [10].

On the other hand, the improvement in oncology and imaging techniques during the last decades have allowed us to obtain an earlier diagnosis and deliver effective treatments against the most aggressive human malignancies, like pancreatic adenocarcinoma [5]. Because of the progression of life expectancy, we shall also expect an increase in the rate of diagnosis of BMs. Therefore, it should be mandatory to consider that these patients may also survive the BMs from pancreatic cancer, especially when a single lesion occurs: as shown by Matsuo et al. [4], among the seven patients who reported a survival time exceeding the six months after diagnosis of BM, 6 presented a single metastatic lesion and underwent radical surgical resection.

It was surprising how our patient was in a very good condition when he presented the first neurological symptoms and that had an overall good response to the systemic treatment, with the clinical and radiological absence of a newly disseminating disease. The treatment by FOLFIRINOX was not enough to stop the metastatic process, despite the good clinical response lasting for more than two years. This had already been seen in the literature, as remarked by Miura et al. [11] and by Jonhson et al. [12], but BMs were multiples, and with leptomeningeal carcinomatosis and they related, as usually known, with an acute worsening of general conditions. The patient reported by Miura et al. died only one month after the BMs diagnosis; on the contrary, in the manuscript written by Jonhson et al. the patient showed a very good response to a new intrathecal treatment with Topotecan and associated systemic treatment, with evidence of progression in life expectancy up to 36 weeks after the diagnosis [12].

In our case, we discussed a patient with a single, surgically accessible lesion, with relatively limited neurological impairment. A last line of chemotherapy was still available; he so matched the conditions for an adequate case in which propose a surgery [3]. Therefore, a craniotomy was performed, with gross total resection, to reduce the progression of the deficit and in the aim to give the patient the best opportunity to benefit from a bed tumor radiotherapy and chemotherapy. Six months after the surgery, the patient is still alive and in a good clinical condition, with KPS 90/100, and it might be included as the 7th patient surviving more than six months after diagnosis of BM from pancreatic adenocarcinoma.

Knowledge about brain metastases from pancreatic adenocarcinoma is still weak, according to this localization’s rarity and the usual very poor prognosis related to this condition. Nevertheless, with the current improvement in the treatment of pancreatic cancer and the consequent increase in life expectancy, it is expected that the incidence of brain metastasis will also increase.

It is important to improve awareness of secondary lesions in the central nervous system and determine in a multidisciplinary discussion which course of treatment is best suited for the patient’s overall survival and quality of life, even in case of palliative care.The surgery role is still limited, but it should always be evaluated in the case of a single lesion. In our experience, the patient recovered well, with a very limited neurologic impairment, and could benefit from an increase in life expectancy and quality of life, for which the surgery may reasonably play its best role.

Thank individuals who contributed to the study or manuscript preparation but do not fulfill all the authorship criteria.

© 2020 Daniele Valsecchi. This is an open access article distributed under the terms of the Creative Commons Attribution 4.0 International License (CC BY-4.0).