Traumatic Vertebral Fracture with Coexisting Enchondroma: a Case-Report and Review of the Literature

Enchondroma of the vertebral spine is a rare clinical entity. For symptomatic enchondroma, surgical resection is the treatment of choice. Here we present the atypical case of a patient with non-symptomatic spinal enchondroma (D9), discovered because of a dorsal trauma that led to a D9 fracture. The pre-operative diagnostic workup gave a suspicion of a co-existing neoplastic lesion, leading to the consideration of a more likely pathologic fracture than a traumatic lesion, with no segmental instability. Therefore, kyphoplasty with Vertebral Body Stenting System and intraoperative biopsy were performed, with evidence of the unusual pathologic lesion. The postoperative evolution showed a complete recovery. After multidisciplinary oncologic discussion, we decided to perform a strict follow-up with MRI at 3 and 12 months, instead of performing a vertebrectomy. At 1-year follow-up, the patient presented no clinical symptoms, and no evidence of lesion recurrence was assessed at the imaging. Though not the recommended treatment choice, kyphoplasty seems to be a potential treatment option for a traumatic fracture superposing on non-previously detected and asymptomatic enchondroma.

The vertebral column’s primary tumors are rare, counting only for 10% of primary bone tumors [1,2]. Enchondroma of the vertebral spine is even rarer, with only a few cases reported in the literature. Enchondroma is a benign bone tumor that belongs to the overarching group of chondromas, a slow-growing tumor producing hyaline cartilage [3]. Enchondroma are tumors of the medullary cavity that are the result of the continued growth of residual hyaline cartilage rests, displaced from the growth plate [4,5]. These tumors count for about 5%–10% of the bone tumors and are most commonly located in hands and feet and only rarely origin from the vertebral column [5,6].

Enchondroma are usually asymptomatic lesions discovered as incidental findings on routine radiological studies, and simple follow-up is indicated [7]. For spinal enchondroma and when symptomatic, patients usually present with pathologic fracture or radiating pain and require surgical treatment. Treatment of choice, in this case, is complete surgical resection [3].

Although enchondroma is benign cartilaginous lesions, sarcomatous degeneration rarely occurs—approximately 4% of enchondroma change into secondary chondrosarcoma [8]. Histopathological and radiological differentiation between enchondroma and chondrosarcoma is challenging, and close follow-up is necessary [9].

An electronic search in the “Pubmed” database from 1966 to 2020 was performed. The following term was used in the search strategies: “enchondroma” and “spine” in title and abstract. All articles in the English language were scanned. Inclusion criteria were clear histopathological differentiation between periosteal chondroma and medullary enchondroma. Exclusion criteria were articles containing the overarching group chondroma without differentiating between periosteal chondroma and medullary enchondroma, articles written in any other language than English, and literature where no original article could be found. Moreover, tables in other publications were scanned for enchondrome in vertebral spine and were included if the primary source was available. They were not included in the original article was not available on “Pubmed.” The result of our literature research is listed in (Table 1). Case-series, cohort studies, case-control studies, and case reports were included in our research, but only case reports were found. 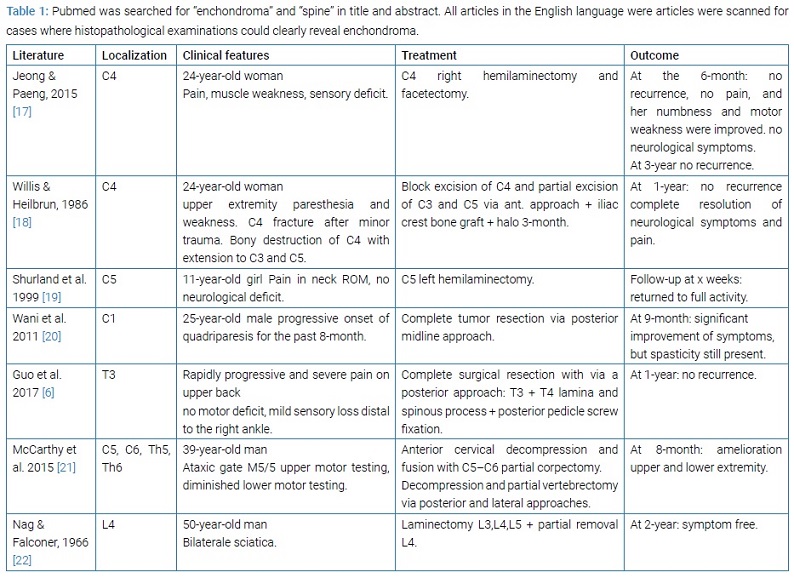 History and Examination: A 39-year-old healthy male patient presented at our emergency department with acute thoracic back pain after a skiing accident. The patient sustained a fall at a moderate to fast speed with an unknown mechanism. At the hospital admission time, the patient presented a progressive pain over the lower thoracic spine. The neurological examination was normal. A CT study revealed a burst fracture of D9, classified as A4, N0 and M0, according to the AOSpine classification for thoracolumbar traumatic fracture (Figure 1A). We decided for hospitalization and further investigation with MRI, in order to check for a tension band’s lesion or collateral vertebral fractures, not detected at the CT-scan. Surprisingly, the MRI showed, only on D9, an atypical very homogenous hyperintensity of the vertebral body and pedicles, in STIR rated images (Figure 1B). This was more suspicious for a neoplastic than for a traumatic lesion. Furthermore, no signs of anterior and posterior tension band lesions were found. Not looking for a neoplastic lesion, the imaging was performed without contrast-enhancing. Primary radiological differential diagnosis included a traumatic fracture with an atypical STIR hyperintensity pattern and a traumatic fracture on a co-existing bone tumor. A thoracoabdominal CT-scan did not find a primary lesion, and a metastatic spinal lesion was unlikely. 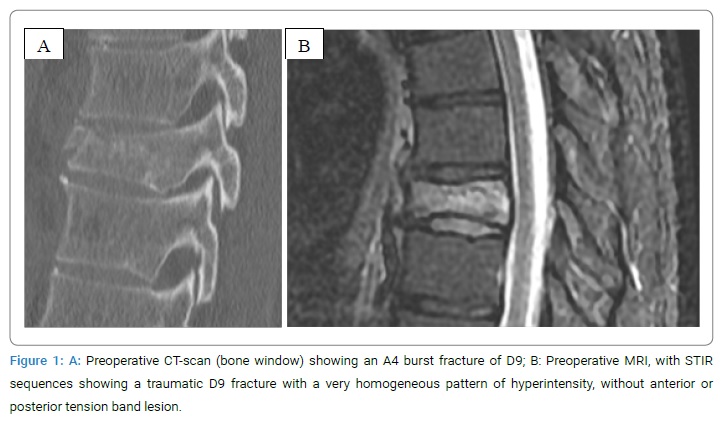 Due to the traumatic fracture pattern, without the tension band’s involvement, but with the co-existing suspicious primary lesion, surgical treatment was discussed. The aim was to stabilize the anterior column and give anterior support, as in pathologic pure bony fractures, without pedicle screws fixation. Therefore, a BKP with VBS and cementation of D9 was performed. Due to suspicious pre-operative imaging, and intraoperative biopsy of the trabecular bone was associated. Free mobilization was allowed post-operatively. Post-operative standing thoracic spine x-rays were obtained and showed a satisfying result (Figure 2A). Post-operative pain was managed with first step analgesics, and the patient could be sent home on the second post-operative day.

Pathological findings: The histopathological results suggested a fracture zone in the context of a chondrogenic tumor (enchondroma). The microscopic examination of the specimen revealed a cartilaginous tumor between bone spans without any sign of the destruction of the underlying tissue (Figure 3). No atypical cells or malignant nuclei were found, and immunohistochemically examinations showed no malignancy (Figure 5).

Post-operative course: Clinical follow-up took place at three weeks, six weeks, three months, six months, and one year. Follow-up did not show recurrence or complication. The patient has gotten back to manual labor, and his normal physical activity level without pain or restriction (Figure 4).

The radiological workup (MRI + contrast agent and X-ray), done at 3 and 12 months, did not show any cartilaginous lesions or operation-related complications (Figure 2B, Figure 4). 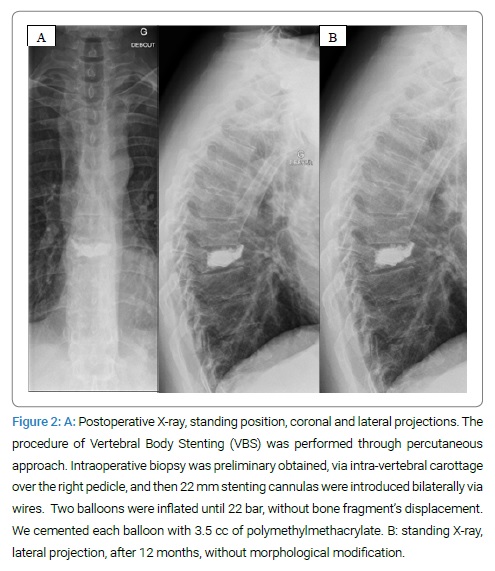 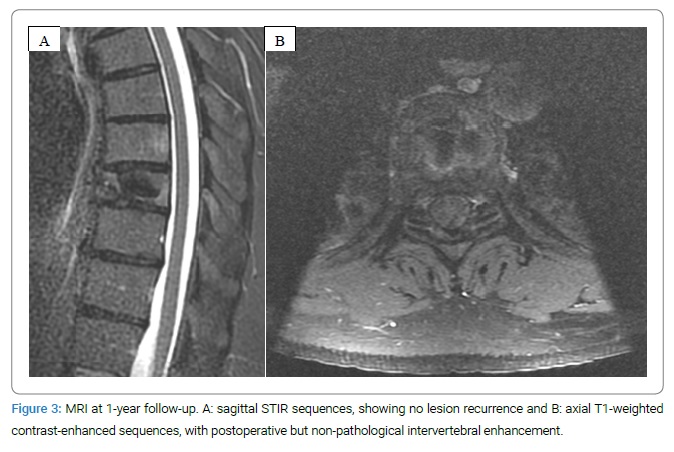 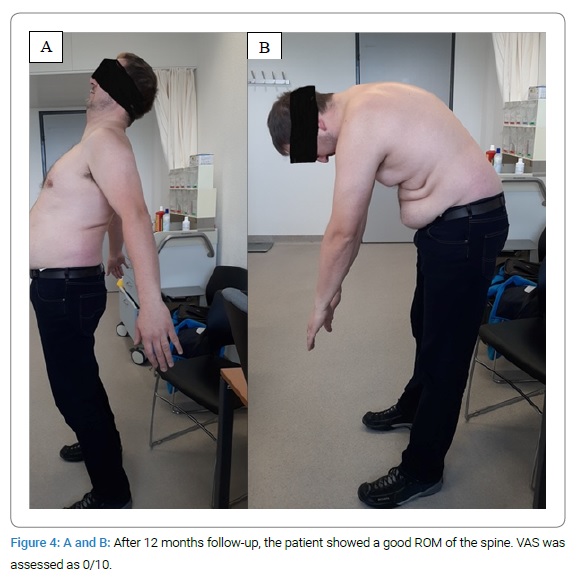 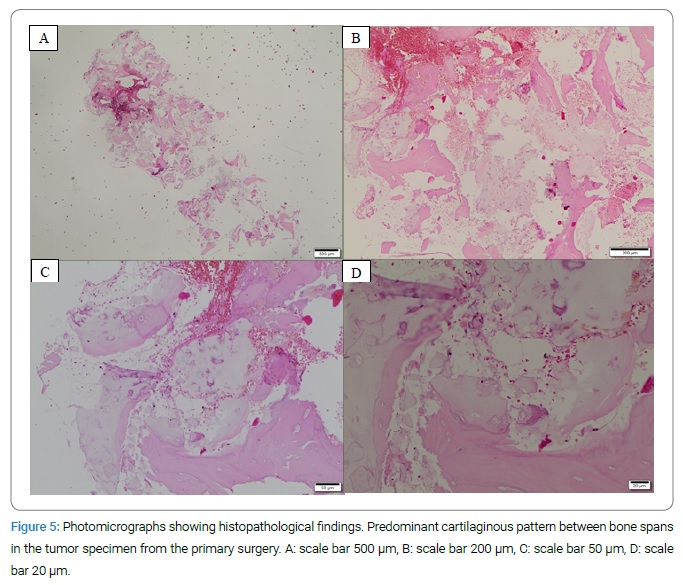 Dealing with vertebral fractures is challenging, especially when the fracture’s origin is not well defined, and an underlying malignancy is suspected. Here the dilemma was to distinguish between a pathological and a traumatic fracture in a patient with the first hypothesis of a vertebral tumor of unknown origin at the time of operation.

According to the patient’s age and expected bone quality, our patient sustained a vertebral fracture in the context of a kinematic-adequate accident. Respectively, our first and main aim was to treat the traumatic lesion. According to the radiological findings, we have also considered the lesion’s co-existing likely pathologic nature, and anterior column reinforcement was necessary. The fracture was treated with VBS, leaving the opportunity to follow-up the lesion by MRI and eventually perform radiotherapy [11].

At the time of operation, the origin of the tumor was still unknown. According to the poor data in the literature, we discussed the need to perform a vertebrectomy when receiving the histopathological results. In the aim to avoid an eventual overtreatment, in a patient with complete recovery and no residual symptoms, the case was discussed during a multidisciplinary oncological board, and Oncologists gave an independent clinical and radiological assessment. At the end of this workup, a regular follow-up was decided.

Treatment of choice for symptomatic vertebral enchondroma is complete surgical resection, by vertebrectomy and pedicle screws spine fixation, for the amelioration of symptoms and minimizing the risk of sarcomatous degeneration [3,6]. Radiotherapy is contraindicated while causing radiation myelitis and being ineffective [12].

Minimally invasive procedures such as Balloon Kyphoplasty (BKP) and Percutaneous Vertebroplasty (PV) were not described for enchondroma spinal lesions but are an accepted treatment option for traumatic fractures and pathologic spine fractures [11]. Several studies have shown advantages in treating pathologic vertebral spine fractures, e.g., in Multiple Myeloma, when spinal fixation contains a higher risk for material infection due to immunosuppression [13,14].

The VBS is a minimally invasive technique with a low complication rate and an adequate improvement in function, pain, and deformation of osteoporotic and traumatic fractures [14,15]. Additionally, the bone cement filling may have a beneficial effect on recurrence rates due to heat destruction, as shown for intramedullary chondrosarcoma of long bones [16].

Traumatic fracture on pre-damaged pathologic bone, in this case, seems to behave like any other traumatic fracture, and treatment of a traumatic fracture accordingly is possible. At 1-year follow-up, our patient is active, has no symptoms, and no radiological tumor progression. Moreover, when seeing a young patient with back pain and suspicious MRI findings, with or without any given trauma, a vertebral biopsy is highly recommended and, although rare, an enchondroma should always be considered differential diagnosis.

Though not the recommended treatment choice, BKP with VBS seems to be an option for a traumatic fracture on co-existing spinal enchondroma, when incidentally discovered in a non-symptomatic patient; nevertheless, a treatment by vertebrectomy should be considered and discussed case by case in a multidisciplinary oncologic team.

Thank individuals who contributed to the study or manuscript preparation but do not fulfill all the criteria of authorship.

© 2020 Daniele Valsecchi. This is an open access article distributed under the terms of the Creative Commons Attribution 4.0 International License (CC BY-4.0).