Allergic Bronchopulmonary Aspergillosis (ABPA) is an uncommon, frequently unrecognized or misdiagnosed pulmonary disease, which occurs predominantly in patients with asthma or cystic fibrosis. It is estimated that ABPA affects more than 4.8 million asthmatic patients worldwide. In Croatia, the prevalence of aspergillosis is unknown, and very sparse clinical reports have been published, mainly on the invasive form of the disease. However, some ecological and animal studies pointed to the possibilities of significant occupational exposure to Aspergillus antigens throughout the country.

We present a case of a 49-year-old asthmatic patient, firstly diagnosed and treated for tuberculosis, and subsequently found to have ABPA.  Since the prevalence of asthma, which is Croatia's general population is 3%–4%, this case suggests the need for a much better evaluation of the epidemiology and clinical importance of ABPA, particularly in patients with asthma.

Allergic Bronchopulmonary Aspergillosis (ABPA) is the most common form of allergic bronchopulmonary mycosis caused by hypersensitivity to Aspergillus fumigatus antigens.

The study of the global burden of Chronic Pulmonary Aspergillosis (CPA) after Pulmonary Tuberculosis (PTB) showed a prevalence rate of CPA, from 0.4 (Western Europe, USA) to 42.9 (Africa) per 100,000 population, while a global burden of CPA complicating ABPA was at a rate of 10% [1].  ABPA is rarely described in patients with a previous history of PTB [3–5] or coexistent disease [6].

Croatia is a country with an estimated population of about 4 million, and with asthma rate prevalence of 3%–4% in the general population (chronic obstructive pulmonary disease of almost 10%), low incidence of tuberculosis (10.6 cases per 100000 population in 2017), no epidemiological data on human aspergillosis, and only a few clinical reports on the invasive form of the diseases [7-9]. However, some ecological and animal studies showed a significant exposure to Aspergillus antigens throughout the country [10,11]. In such epidemiological circumstances, the diagnosis of either of the diseases, ABPA or PTB, may be challenging. Here, we report a case where the patient with long-standing asthma was treated firstly for tuberculosis and then for ABPA.

A 49-year-old female, known to be asthmatic since childhood, was hospitalized in November 2016, with a 2-month history of mild productive thick sputum with brown plugs and Computed Tomography (CT) findings of bilateral apical tree-in-bud lesions and reduced volume of the right upper lobe plus central and proximal bronchiectasis partially filled with the hyperdense substrate (Figure 1A,B). 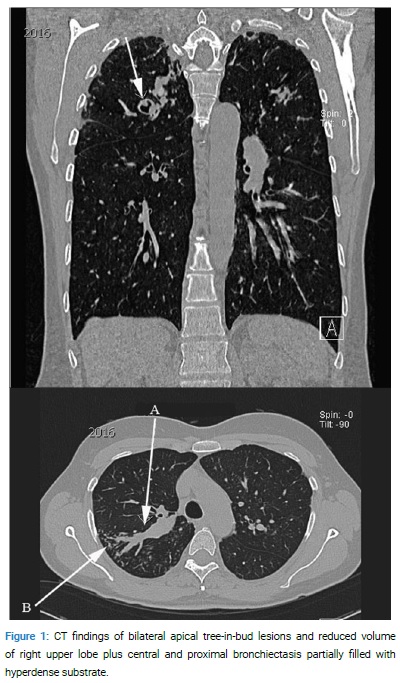 The epidemiological data on contact or occupational exposure were non-significant. The physical examination was unremarkable. Routine blood tests were unremarkable. No diagnostic tests for ABPA were performed. The Quantiferon-TB Gold in-Tube test (QFT) was negative. Direct microscopy on Acid-Fast Bacilli (AFB) in sputum was negative, but the material obtained by Bronchoalveolar Lavage (BAL) was positive. Treatment was started with isoniazid, rifampin, pyrazinamide, and ethambutol. Four weeks later, the CT finding showed no significant changes, while the BAL material showed no more acid-fast bacteria.
At follow-up, after nine months, the patient did not have adequate clinical and radiological improvement despite the treatment. Moreover, the control at the end of 2017 showed a progression of CT findings (Figure 2A,B) that demanded a re-evaluation of the diagnosis. 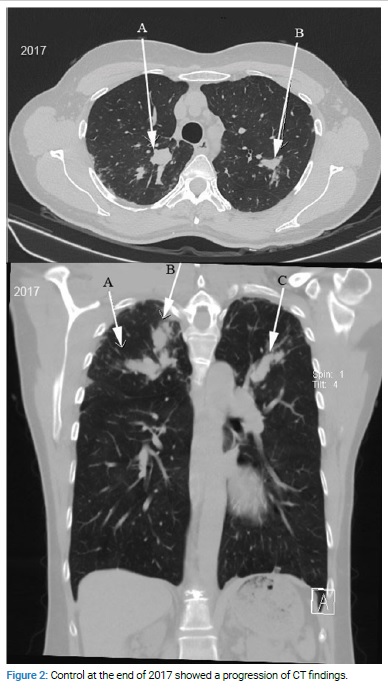 During this period, she had controlled her asthma well with a combination of inhaled corticosteroid and long-acting β2 adrenoreceptor agonists and had no significant respiratory or systemic symptoms; the physical examination was unchanged. Extended laboratory findings at the beginning of 2018 revealed WBC with 6.3/µL (eosinophils 560 cells/µL), total serum IgE level of 2387 IU/ml, and positive specific IgE antibodies to Aspergillus fumigatus (1.2 U/ml). Oral itraconazole and prednisolone were started. At three months, the total  IgE level was 834 IU/ml; specific IgE was 0.9 U/ml; at six months the total IgE was 383 IU/ml, specific IgE antibodies were 0.5 U/ml, at nine months the total IgE was 165 IU/ml, specific IgE 0.0 UI/ml, and WBC 5.1/µL (eosinophils 143 cells/µL).  After six months of the treatment, a control chest CT showed an almost complete resolution of lesions (Figure 3A,B). Itraconazole was stopped after six months, while daily prednisolone after the first few months was converted into alternate-day dosing. 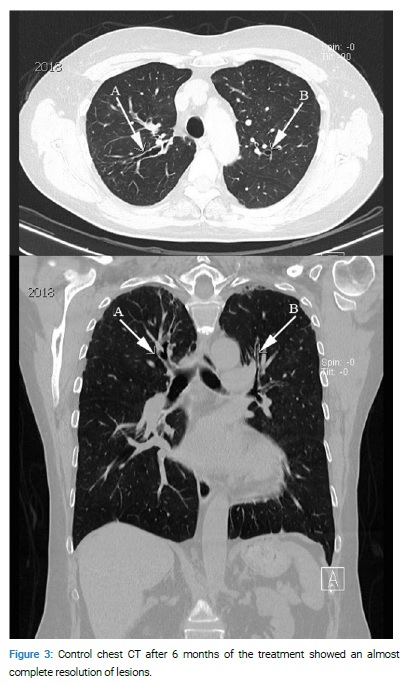 ABPA is an uncommon, frequently unrecognized or misdiagnosed pulmonary disease, which can lead to permanent and severe lung damage. Various clinical and radiologic forms of the disease are the result of a combination of environmental factors, the virulence of the microorganism, host immune response, and genetic predisposition [2]. At the same time, this is the main reason for ABAP being frequently under-recognized and under-diagnosed in many countries, even in those with a high prevalence rate. ABPA is mostly misdiagnosed with PTB, and the patients frequently received anti-TB drugs [12–15], but the vice versa case is also described [16]. In Croatia, the general prevalence of aspergillosis is unknown, and, in our medical Bibliography, we found only several clinical reports, mainly of invasive aspergillosis in immune-compromised patients [7–9]. In addition, the incidence of PTB in Croatia is relatively low (486 cases in 2017, approximately 300 cases annually in the native-born population) (ECDC Tuberculosis surveillance and monitoring in Europe, 2017). On the other side, the global prevalence of asthma in Croatia is relatively high, 3%–4%.

In our case, the patient was at first routinely diagnosed and treated as PTB (positive AFB smear from BAL, although two AFB sputum smears were negative). In this regard, the CDC's current recommendation is that the testing should be provided in at least three specimens with an adequate volume of sputum [17]. The unresponsiveness on the nine months of the anti-TB drug, CT findings of progression of bronchiectasis, elevated total IgE levels more than 1000 IU/ml, elevated IgE levels against Aspergillus fumigatus and eosinophil count more than 500 cells/µL finally confirmed the diagnosis of  ABPA, according to criteria proposed by the ISHAM working group [18,19]. After treatment with corticosteroids and itraconazole, radiologic, serologic, and clinical resolutions followed. Finally, we can conclude that tuberculosis in our patient developed in the condition of preexisting untreated ABPA.

In conclusion, this case emphasizes that in countries, especially those with the low or unknown prevalence of ABPA and/or PTB (as in Croatia), firstly need a high index of suspicion for a diagnosis. Secondly, every attempt should be made to exclude other differential diagnostic possibilities in asthmatic patients, particularly when a tree-in-bud radiologic pattern occurs (with or without bronchiectasis). Thirdly, it might be more reasonable to implement the Aspergillus fumigatus-specific IgE screening routine or type I Aspergillus skin test in these patients.

Besides, the ecological and animal studies in Croatia and the prevalence of asthma in the general population suggest the need for a nationwide survey of ABPA.

© 2020 Miro Morovic. This is an open access article distributed under the terms of the Creative Commons Attribution 4.0 International License (CC BY-4.0).