Takotsubo or not Takotsubo Syndrome: A Case Report

Background: Takostubo cardiomyopathy is defined by the presence of transient wall motion abnormalities, most of the time in the form of an apical ballooning and without coronary occlusion. Causes remain unclear. Psychological or physical stress could cause this pathology related to catecholamine cardiotoxicity. The distinction between Takotsubo cardiomyopathy and myocardial infarction is not always easy to make. This particular clinical case is a good illustration of that situation.

Case Presentation: A 76-year-old woman presented to the emergency department with chest pain. The initial electrocardiogram was consistent with ST-Segment Elevation Myocardial Infarction (STEMI). The coronary angiography showed healthy coronary arteries, and the ventriculography reveals apical dyskinesia. After the procedure, the patient was hemodynamically stable. However, two hours later, she presented with hypotension, and a transthoracic echocardiogram revealed cardiac tamponade. Surgical drainage was urgently performed and showed a small apical perforation. The perforation was repaired, and she finally recovered. An MRI was performed twenty-two days later and showed a non-dilated left ventricle with preserved overall function, apical akinesia as well as evidence of an apical post-infraction status consisting of subendocardium to apical transmural scarring.

Conclusion: The initial presentation was consistent with Takotsubo cardiomyopathy considering electrocardiogram modification, healthy coronary arteries, and apical dyskinesia. The patient did not have a clear trigger, but she was known for anxiety. The findings with MRI were consistent with myocardial infarction. However, the surgical intervention could have changed the appearance of the MRI making a definitive diagnosis difficult.

Clinical summary: A 76-year-old female patient with a history of atrial fibrillation treated with Rivaroxaban presented to the Emergency Department with atypical chest pain irradiating to the left arm, discomfort, and profuse sweating. She reported having the same chest pain three days before the consultation. 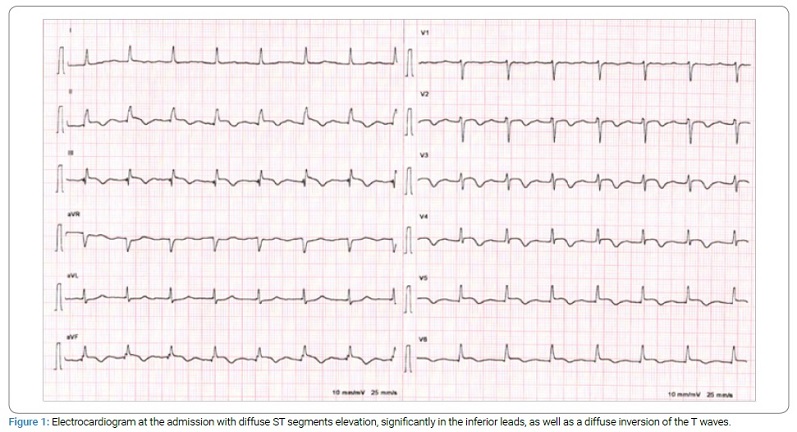 An emergency coronary angiography was performed that showed healthy coronary arteries. Ventriculography (Figure 2) revealed apical dyskinesia, with an estimated left ventricular ejection fraction of 65%. After the procedure, the patient was hemodynamically stable with no heart failure evidence but continued to suffer chest pain. 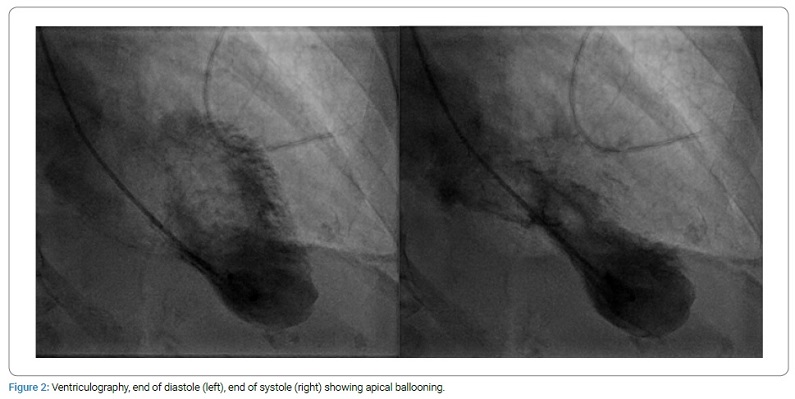 Due to the apical akinesia and the absence of coronary artery disease, it was decided to discontinue the antiplatelet therapy and continue with rivaroxaban. Echocardiography confirmed apical ballooning and showed slight pericardial effusion without hemodynamic repercussions. Two hours later, the patient presented with hypotension followed by severe bradycardia without a pulse requiring cardiopulmonary resuscitation for 3 minutes and the administration of 1 mg of atropine resulting in the return of spontaneous cardiovascular activity. A new transthoracic echocardiogram performed at this time showed a 40 mm pericardial effusion with severe compression of the right ventricle, requiring urgent surgical drainage.

The patient was transferred to surgery, and a midline sternotomy was performed. When the pericardium was opened, large quantities of fresh blood clots could be seen. The macroscopic examination was compatible with the apex’s infarction, and there was a perforation of 3 mm in length (Figure 3). 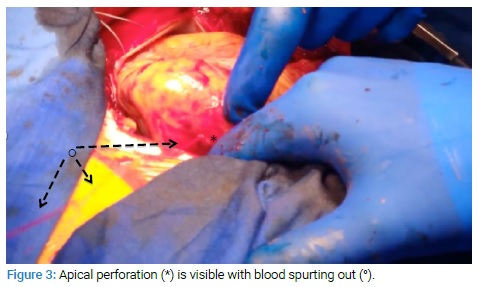 The perforation was repaired with Prolene 4.0 stitches mounted on Teflon splints, followed by the placement of an equine pericardium patch secured with a Prolene 4.0 (Figure 4). 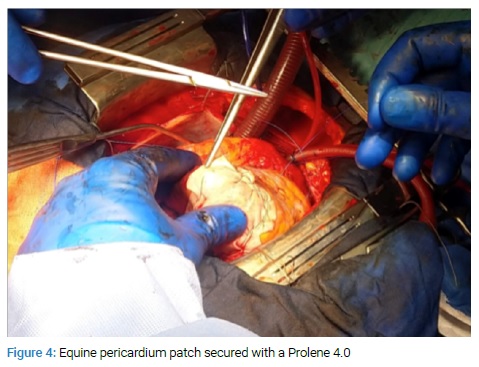 In the initial laboratory workup, the cardiac enzymes showed a decrease in troponin T-hs to 256 ng/l. Following the tamponade and surgical repair, they increased to 638 ng/l, without a noticeable rise in CKs. However, the next day, the patient had a renewed clinical shock presentation with a rise in lactates and decreased urine output. Transthoracic and transesophageal echocardiograms were performed, which confirmed a recurrence of tamponade with an effusion located in front of the right ventricle requiring surgical revision with drainage and clot removal. The pericardial drains were removed the next day. The subsequent evolution was positive with a drop in Troponins, stable EKG, and the aminergic support by dobutamine was discontinued. 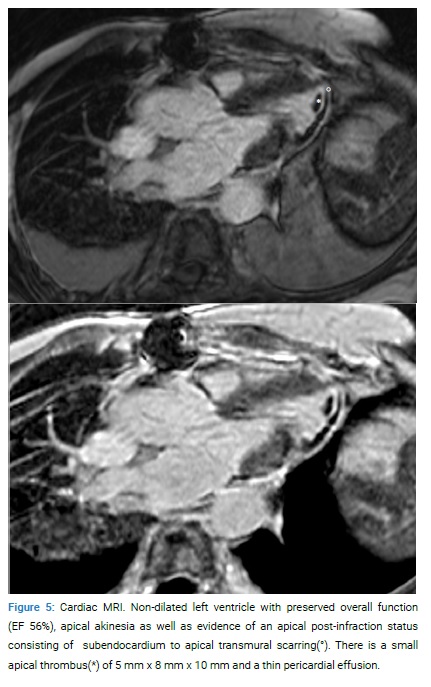 Because of the absence of coronary artery injury, apical dyskinesia with ST-segment elevation, and minor elevation of cardiac enzymes, the initial diagnostic hypothesis was Takotsubo syndrome. However, considering the macroscopy and MRI (of which the interpretation is limited due to the post-operative status), the differential diagnosis remains a Myocardial Infarction with Nonobstructive Coronary Arteries (MINOCA).

As a reminder, criteria for a MINOCA are an acute myocardial infarction without obstructive coronary lesions (> 50%) and no clinically overt specific cause for the acute presentation [1].

Free wall perforations are rare complications, occurring in less than 1% in either case of myocardial infarction (0.14% [2]–0.8% [3]) or Takotsubo syndrome (0.5% [4]). The risk factors for perforations in myocardial infarct or Takotsubo syndrome are female gender, advanced, and high blood pressure [5]. Circumstances increasing the risk of ruptures are the persistence of ST-segment elevation, indicating persistent myocardial injury, a significant increase in troponins or CK, a rise in transmural pressure, or mechanical stress due to a high-pressure gradient in the left ventricular outflow tract [6]. The patient may present with sudden severe chest pain that may or not be associated with hemodynamic instability. Being able to recognize these signs of complications quickly is essential and requires a bedside echocardiogram. The immediate necessary care is a surgical intervention with pericardiocentesis and repair of the perforation. The mortality rate remains high and is estimated between 20% and 75%, depending on the situation [7].

This particular clinical case is a good illustration of possible Takotsubo syndrome. The patient rapidly developed hemodynamic instability with evidence of tamponade on the echocardiogram. The subsequent management was appropriate, consisting of drainage and surgical repair of the perforation. The challenge, in this case, is the etiological diagnosis. The initial clinical, biological, and radiological presentation is suggestive of a Takotsubo syndrome. That would be a plausible scenario in a 74-year-old female patient with apical localization, diffuse EKG changes, and abnormal wall motion, which are all typical findings in this syndrome. However, other evidence, particularly macroscopic assessment during surgery and subsequent cardiac MRI, showed equally compatible results and supported a diagnosis of subacute transmural infarction. In this situation, troponins and CKs remained comparatively low for a subacute infarction with akinesia of this size. Hypothetically, if the infarction had occurred three days prior (onset of initial symptoms), there should be a significant increase in ALAT or LDH, which is not the case here. A cardiac MRI should be performed within two weeks to confirm the diagnosis and clarify the etiology [8]. However, the surgical intervention could have changed the appearance of the MRI making a definitive diagnosis difficult.

In our case, the mystery remains unsolved.

© 2020 Loic Daellenbach. This is an open access article distributed under the terms of the Creative Commons Attribution 4.0 International License (CC BY-4.0).