Background: Hemoptysis is caused by several lung diseases and can be fatal in some cases. However, the risk factors of hemoptysis and prognosis remain unclear.

Methods: We present the cases of 15 patients with hemoptysis who had undergone Bronchial Arterial Embolization (BAE) at our hospital. We also analyze the patient’s background, hemoptysis risk, and prognosis.

Results: Etiological analysis showed that Bronchial Racemose Hemangioma (BRH) was the highest prevalence, being present in seven patients (47%), followed by Bronchiectasis (BE) that was present in four patients (27%). In addition to lung disease, hypertension, and a high Brinkmann Index might be risk factors of hemoptysis. Flexible Broncho-Fibers copy (BF) and Chest Dynamic CT, especially three-dimensional CT, appeared useful in patients with massive hemoptysis. All patients except one were managed well and survived with our treatment.

Further, it is crucial to perform an examination of all the branches of the bronchial artery at that time. We emphasize that both bronchoscopy and BAE are imperative for patients with fetal hemoptysis.

Several pulmonary diseases, such as tuberculosis, bronchiectasis, and primary lung cancer, cause hemoptysis. These disorders sometimes exhibit massive and life-threatening hemoptysis, causing fatalities. In these cases, bleeding almost originates from bronchial arteries or non-bronchial systemic collateral vessels. Bronchial Artery Embolization (BAE) has been performed for hemoptysis treatment. It is advantageous in that it can control massive and life-threatening hemoptysis immediately. However, in our hospital, recurrent hemoptysis has also been reported owing to recanalization or revascularization. We speculate that massive hemoptysis recurrence may be associated with vascular fragility; however, few studies have assessed the fragility associated with hemoptysis. Here we focus on the patients’ background, the vascular dimension of embolized vessels, and long-term results. Also, we refer to the treatment for recurrent hemoptysis after BAE.

Patients: From April 2010 to June 2020, 15 patients underwent bronchial angiography for massive and life-threatening hemoptysis in our hospital. The 15 patients, including seven men and eight women with a median age of 77 years (range, 41 years to 87 years), who underwent BAE, were analyzed in this study. The patient characteristics and underlying etiologies of hemoptysis are shown in (Table 1).

In some cases, flexible Broncho-Fibers copy (BF) was additionally performed to lateralize the bleeding side, localize the specific site, and identify the cause of hemoptysis. All patients had been hospitalized in our intensive care unit and underwent standard medical management, such as monitoring vital signs and the administration of oxygen for hypoxemia, and antibiotics in patients with documented or suspected bacterial infection.

BAE with mechanical ventilation was performed in one patient.

Technique of BAE: Briefly, under local anesthesia, transfemoral bronchial arteriography was performed percutaneously using a 4F or 5F catheter. In all cases, bronchial or non-bronchial arteries were found to be abnormal with arterial enlargement, regions of hypervascularity, or systemic-to-pulmonic shunting. The embolization materials were routinely used absorbable gelatin sponge particles (Spongel; LTL Pharma, Tokyo, Japan). All the procedures were performed by a single radiologist who carefully performed all the processes. The visualization of an anterior spinal branch or catheter instability was an absolute contraindication.

In addition, with or without bronchial BF, CT findings [such as emphysema, location of infiltration caused by blood aspiration, detection of the dilated bronchial artery (BA)] and angiographic findings [such as systemic-to-pulmonic shunt (S-P shunt), measurement of BA by using picture archiving, and communication systems (PACS) software] were also analyzed. At first, we explored the lung field and diagnosed lung disease. Next, we distinguished between the primary and the secondary BRH.

These processes were performed with both a single radiologist in our hospital and us. Furthermore, the recurrence of hemoptysis with or without relapse was inquired. After the treatment, all patients were followed up at our department.

Background of the patients: Of the 15 patients who underwent BAE, all except one fell in the elderly age group, as shown in (Table 1). Etiological analysis showed that BRH was the most prevalent condition, observed in seven patients (47%), followed by bronchiectasis (BE) that was the present in four patients (27%). The information of the 15 patients who underwent BAE has been detailed in (Table 2) and (Table 3). 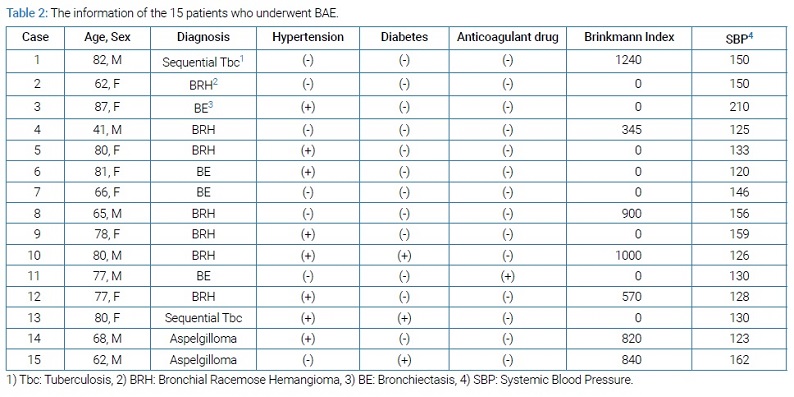 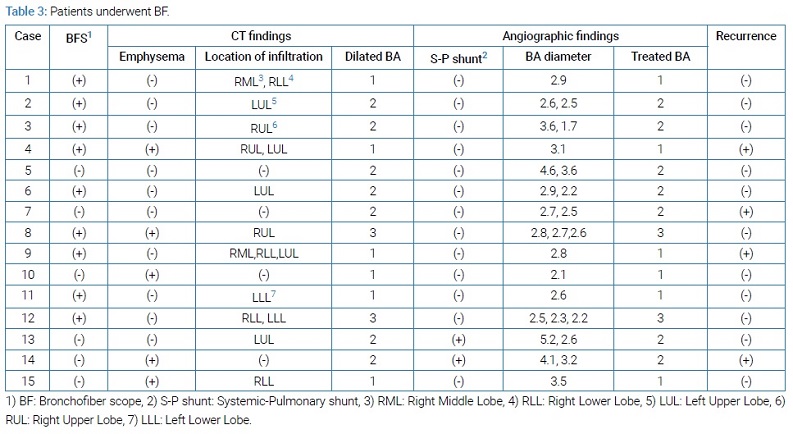 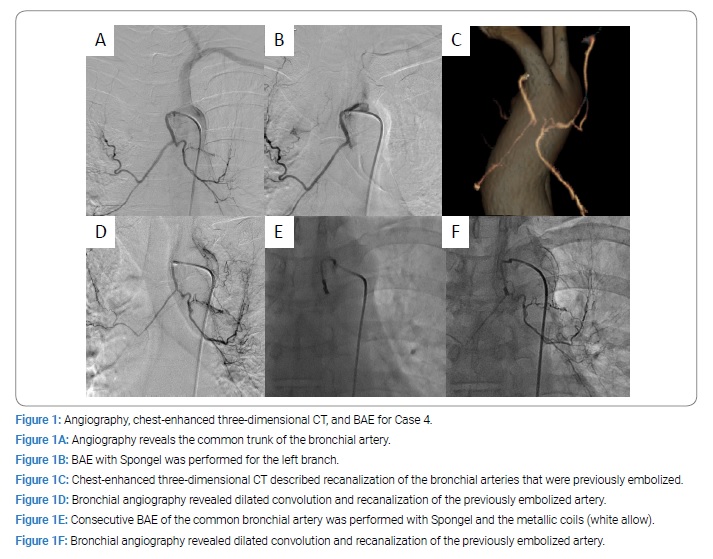 We show the other case. A 77-year-old female (Case 12) visited our hospital with hemoptysis. She was never smoker, nor family history of malignancies. Chest X-ray did not detect an abnormal shadow, but chest plane CT showed infiltration of the left lung opacities. Chest dynamic CT revealed convolution and about 3 mm dilated of bronchial vessels, and three-dimensional CT demonstrated several BRHs extending from descending aorta (Figure 2A). By detailed examination of the CT, one BRH (above allow) showed pooling of contrast injection in the right upper lobe, and the other BRH (below allow) revealed pooling of the injection in the left upper lobe (Figure 2B). BF showed the massive bleeding from the left side of the bronchus. Selective bronchial angiography showed 3 mm dilated convolution and pooling of contrast injection in the right upper lobe (Figure 2C) and the left upper lobe (Figure 2D). 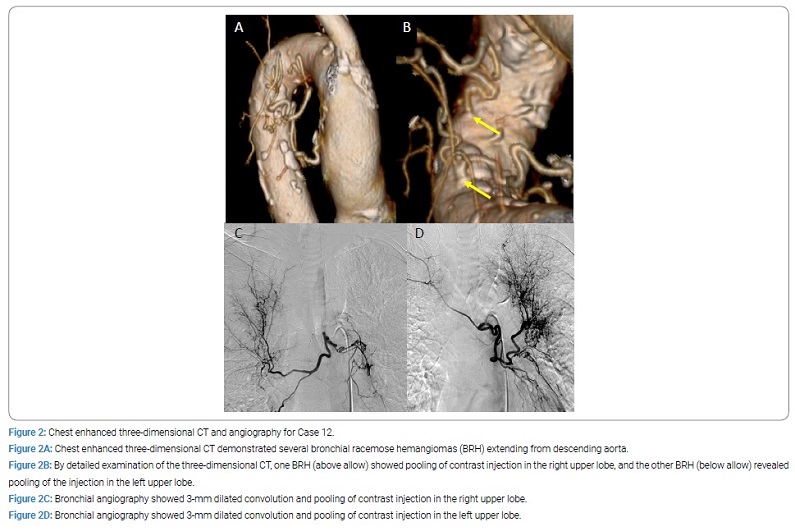 The angiography revealed the third vessel (data not shown). BAE was performed with absorbable gelatin sponge (Spongel) for all of them. After BAE, the BRH could not demonstrate, and then she discharged two days after the treatment. At the time of writing this report, this patient was doing well at 3 years after the treatment, and three-dimensional CT did not show BRH recurrence.

After the treatment, all patients were followed up at our department. The number of patients per follow-up interval has been shown in (Figure 3). 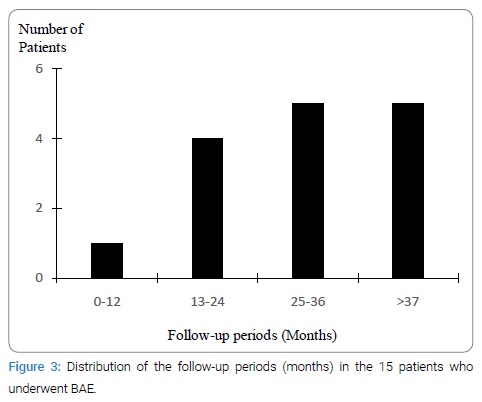 Except one patient, Case 13, all the others were managed well and survived with our treatment. With respect to Case 13, this patient underwent BAE for massive hemoptysis caused by sequential tuberculosis and then recovered; however, she died 1 month thereafter owing to pulmonary arterial embolism of the healthy side.

Life-threatening hemoptysis was defined as at least 200 mL of blood loss per hour in a patient with normal lung function. In a patient with lung etiologies, only 50 mL of blood loss leads to a fatality. Bronchial and non-bronchial systemic arteries are now considered to be the main source of hemoptysis) [1–3]. As shown in (Table 1), no sex-based differences were observed. All the patients had some lung etiologies and were elderly, except for one patient. BRH was the most common causal factor of hemoptysis. It was characterized by a dilated and convoluted BA and vascular hyperplasia, causing abnormal anastomosis (adjacent vessels) [4].

Bavo et al. first described BRH as angioma-like changes in 1976) [1], and BRH has been classified into two types, congenital vascular malformation as a primary form and subsequent vascular malformation broncho-pulmonary inflammation as a secondary form) [5]. As shown in (Table 2), there appeared to be a correlation between hemoptysis and hypertension in addition to that with the Brinkman index and SBP. However, there was a limited relation between hemoptysis and diabetes in addition to that with anticoagulant drugs. As shown in (Table 3), nine (60%) of the patients underwent BF. We have previously reported that BF produces more information about the bleeding point and could be used for intubation at the time of massive bleeding as a sucker and confirmation of the tube position directly) [6]. For one patient (Case 9), BF was useful for intubating the healthy lung in a short time.

There was a weak relation between hemoptysis and CT findings (with or without emphysema, blood aspiration site, the number of a dilated bronchial arteries). Furthermore, there was a limited relation between hemoptysis and angiographic findings (with or without a pulmonary-arterial shunt, the number of treated BA, and the diameter of BA) and relapse.

BAE is well accepted in hemoptysis management; however, of the patients successfully treated by BAE, 20% exhibited re-bleeding at the 6 months follow-up) [7]. The reason for recurrent hemoptysis appears to be a recanalization and recruitment. There were two peak times of recurrent hemoptysis. The first peak was from 1 to 2 months post-BAE, indicating incomplete BAE that could lead to hemoptysis from the other non-bronchial arteries. The second peak was from 1 year to 2 years post-BAE, indicating vasculature recruitment by the underlying pulmonary disease and relapse. In our cases, hemoptysis occurred from 6 months, 8 months, 19 months, 19 months after the initial BAE. The relapse rate was low within 6 months; therefore, the main reason for the relapse appeared to be the recruitment of vasculature. Furthermore, BAE may control hemoptysis’s recurrence and survive for a long time, as shown in (Figure 3). BAE is associated with several complications, such as spinal ischemia, paraplegia, and renal failure; however, we did not observe any such complications at our hospital.

The embolization materials were routinely used absorbable particles of gelatin sponge, but only one case used a metallic coil in addition to Spongel for recanalized bronchial racemose hemangioma (Case 4). He is doing well without hemoptysis for 5 years, so BAE with a metallic coil may prevent massive hemoptysis.

The other therapeutic procedures include arterial bronchial ligation and surgical resection. Hamano et al. described that arterial bronchial ligation via surgery was advantageous for the patient in terms of certainty) [8]. However, general anesthesia is essential, and the treatment may remain incomplete, such as in the case of patients with hemoptysis from the non-bronchial arteries.

Furthermore, surgical resection of the bleeding region involves several complications, such as postoperative pneumonia, empyema, postoperative air leakage, and atelectasis. Twenty percent of the patients may have such complications, and the mortality was reported to be 2%.  As per a recent study, arterial bronchial ligation via thoracoscopic surgery is beneficial for the patient due to its slower invasiveness) [9].

BRH also complicated bronchial-pulmonary arterial fistula, and a procedure, such as arterial bronchial ligation or left upper lobectomy, is performed in such cases) [10].

In conclusion, our study demonstrates that BAE is such a useful treatment for emergent and massive hemoptysis. When a patient with hemoptysis presents, we investigate the patient’s background and then perform enhanced chest CT and BF. For patients with persistent massive hemoptysis, we perform BAE as soon as possible; further, we examine all the BA branches.

We emphasize that both BF and BAE is vital for patients with life-threatening hemoptysis.

Competing interest:  The authors declare no conflict of interest.

We thank Dr. Hiroyuki Takeda for his expert treatment.  We also thank all staff of Shinkomonji Hospital for their help.

© 2020 Tetsuya So. This is an open access article distributed under the terms of the Creative Commons Attribution 4.0 International License (CC BY-4.0).