Case: The pharmacist identified drug interactions associated with the cytochrome P450 enzymatic system and P-glycoprotein during a medication safety review for an 86-year-old male. Clinical recommendations were made to mitigate these interactions and align the therapeutic regimen with national consensus guidelines based on patient characteristics. Overall, the pharmacist recommended that the provider deprescribe medications found to be unsafe in the elderly to improve the medication risk score associated with medication-related morbidity.

Conclusion: The interventions recommended by the pharmacist’s interventions decreased the risk of adverse events and may have helped avoid hospital readmission. The case report lends evidence to support a clinical decision support system’s role and its value towards improving patient health outcomes post-hospital discharge.

Adverse Drug Events (ADEs) become more common as patients age, and the occurrence doubles for those that are 65 years and older [1]. However, many of these can be mitigated by identifying potential Drug-Drug Interactions (DDIs) [2]. The following case presentation describes a situation in which interventions proposed by a pharmacist during a medication safety review using an advanced clinical decision support system may have significantly improved patient outcomes. These comprise a decrease in the risk of ADEs and hospital readmission through DDI mitigation.

Patient History: An 86-year-old male with a history of arthritis, asthma, Atrial Fibrillation (AFib), Coronary Artery Disease (CAD), insomnia, Type 2 Diabetes Mellitus (T2DM), Hyperlipidemia (HLD), Hypertension (HTN), and Benign Prostate Hypertrophy (BPH) was readmitted to the hospital cardiac unit after a recent discharge for pneumonia and AFib with rapid ventricular response rate. Upon admission, he complained of coughing that had not resolved since the previous admission nine days prior.

Differential Diagnosis and Treatment: An electrocardiogram showed a left bundle branch block, and the patient’s troponins were elevated with a peak of 1.7 ng/mL. He was also found to have an ejection fraction of 50%. Considering these discoveries, the patient was admitted for Non-ST Segment Elevation Myocardial Infarction (NSTEMI). The creatinine clearance was not decompensated while in the hospital. A percutaneous coronary intervention was performed required two drug-eluting stents. He was also diagnosed with heart failure with preserved ejection fraction (HFpEF). He was treated with diltiazem in the hospital for ventricular rate control, then prescribed triple anticoagulation therapy for one month, and referred to a pharmacist- and nurse- coordinated transition of care program for discharge consultation services. The service included comprehensive medication management services one week and three weeks post-discharge. The pharmacist assessed for DDIs, drug-disease interactions, therapeutic duplications, ADEs, dosing concerns, high-risk medications in the elderly, medication adherence, cost-related barriers, and disease counseling services. See (Table 1) for the list of medications upon discharge prior to the pharmacist’s consultation. 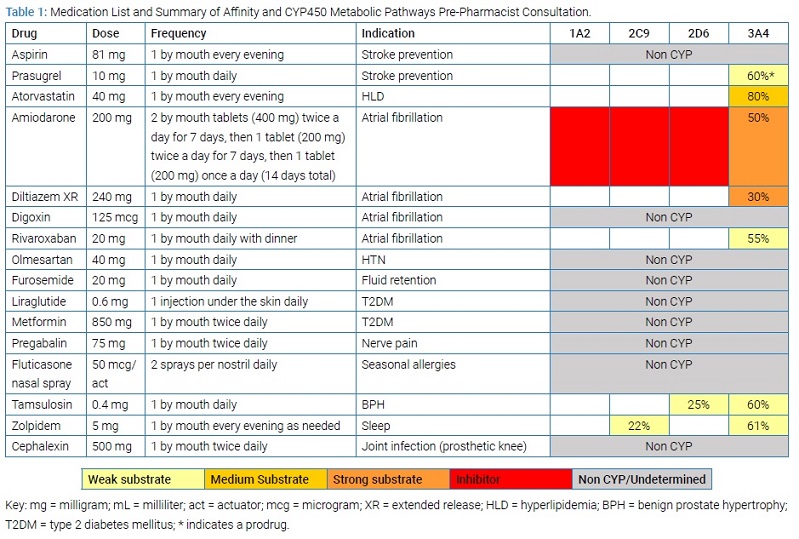 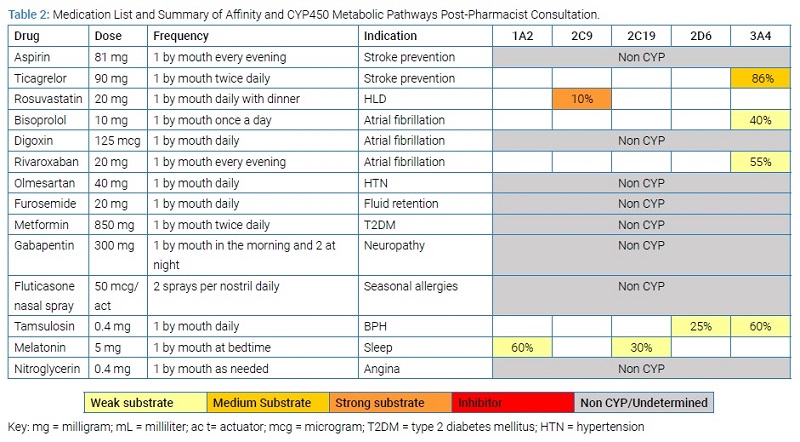 The provider accepted all of the pharmacist’s recommendations over the course of several weeks.
In addition, the provider tapered off amiodarone as ordered on discharge and monitored accordingly. Through these interventions, the MedWiseTM Risk Score [11,12] (medication risk score) decreased in severity from a high-risk score (20) to a low-risk score (11); as this medication score is associated with medication-related ADEs, a decrease in the medication risk score is expected to decrease the risk of ADEs [12].

During the initial consultation, the pharmacist identified several drug interactions associated with the cytochrome P450 (CYP) enzymes CYP3A4, CYP2D6, and CYP2C9, and P-gp.

Amiodarone: The anti-arrhythmic amiodarone is metabolized and eliminated through the liver. More specifically, this medication is an inhibitor of multiple CYP450 isoforms, including CYP1A2, CYP2C9, and CYP2D6 [13]. It is also a high-affinity substrate of the CYP3A4 isoform. When the activity of an isoform is inhibited, all other medications metabolized by the same isoform can be affected, which leads to poorer and unintended clinical outcomes [14]. In this scenario, atorvastatin is a substrate of CYP3A4, but amiodarone acts as a competitive inhibitor of CYP3A4. Thus, when taken with amiodarone, atorvastatin is not metabolized as efficiently (decreased clearance), leading to greater concentrations of atorvastatin in the system. Concomitant use of these drugs also would have increased the patient’s risk for myopathy and rhabdomyolysis [9].

Digoxin: The use of digoxin with amiodarone may increase the systemic concentrations of digoxin. Digoxin is a substrate for P-glycoprotein (P-gp), which is an efflux pump responsible for the renal excretion of the drug through tubular secretion [15]. Amiodarone inhibits P-gp, which prevents digoxin from being secreted, leading to increased plasma concentrations [16]. In this scenario, the medication dose prior to the pharmacist’s consultation could have led to digoxin toxicity, given the recent initiation of amiodarone. Hence, it was imperative to closely monitor digoxin levels during concomitant therapy with amiodarone. It is important to note that due to amiodarone’s long half-life, digoxin dose reductions are often required for some time once amiodarone is discontinued [13].

Diltiazem: Similar to amiodarone and atorvastatin, diltiazem is also metabolized by CYP3A4. However, diltiazem has the same affinity as amiodarone for this isoform. In this scenario, the result of the interaction depended on the order in which the patient took the medications. If diltiazem had been administered hours prior to amiodarone, the metabolism of amiodarone would have been lower [17]. Diltiazem and digoxin are both substrates for P-gp. In this scenario, if the patient had administered both medications concomitantly, it would have increased the risk of bradycardia and AV block, which are synergistic cardiac effects shared by both drugs [18–20]. Hence, it was recommended to discontinue diltiazem and prescribe an alternative agent to mitigate these risks.

Prasugrel: Triple therapy consisting of two anti-platelets and one anticoagulant can be used in patients with atrial fibrillation that undergo percutaneous coronary intervention. However, there is evidence that dual antiplatelet therapy plus a direct oral anticoagulant increases the risk of bleeding and is non-superior to a single antiplatelet plus direct oral anticoagulant [21]. Currently, research is being conducted to reassess the duration of antiplatelet therapy and to determine if ticagrelor or prasugrel alone prevents ischemic events, as well as dual-antiplatelet therapy [22]. The antiplatelet drug prasugrel is a prodrug that the body completely hydrolyzes to an inactive intermediate metabolite. That inactive metabolite is then converted to an active metabolite by CYP3A4 and CYP2B6. For this patient, however, the presence of amiodarone and diltiazem would prevent, at least partially, prasugrel from converting to the active metabolite. Thus, the pharmacist recommended discontinuing prasugrel and initiating an alternative antiplatelet, such as ticagrelor, that does not require activation [23].

Ticagrelor: Following the proposed changes in the drug regimen, the pharmacist recommended monitoring for ADEs related to bisoprolol, rivaroxaban, and tamsulosin. These three medications are substrates of CYP3A4. Ticagrelor has the greatest affinity of these three, and dose separation to mitigate this interaction was not feasible, given its twice-daily dosing.

© 2021 Bingham J. This is an open access article distributed under the terms of the Creative Commons Attribution 4.0 International License (CC BY-4.0).