Background: Different therapies have been studied in patients with cardiac arrest due to ST-Elevation Myocardial Infarction (STEMI). However, none of the anti-arrhythmic or vasopressor medications have consistently been shown to improve these patients’ survival or neurological outcomes. Recent studies show that administration of fibrinolytic drugs during cardiac arrest may improve survival outcomes and neurological status.

Conclusion: Our case report shows that in cardiac arrest due to STEMI, the immediate performance of the ACLS algorithm and fibrinolysis could substantially influence survival and neurological outcome, even if guidelines do not yet recommend this practice.

Cardiac arrest represents the most severe adverse event that may occur during hospitalization. Survival rates after adult In-Hospital Cardiac Arrest (IHCA) does not exceed 20% in most studies [1]. No anti-arrhythmic or vasopressor medications have consistently been shown to improve survival or neurological outcomes.

Older studies showed that administration of fibrinolytic drugs during an out-of-hospital cardiac arrest could improve survival outcomes and neurological status in patients with a high probability of myocardial infarction [2,3], whereas fibrinolysis in IHCA is generally not considered preferring direct access to cath-lab [4].

In the TROICA study [5], fibrinolysis with tenecteplase during ACLS in Out-of-Hospital Cardiac Arrest (OHCA), due to Pulmonary Embolism (PE) or Acute Coronary Syndrome (ACS), did not improve patients outcomes comparing with placebo. Nevertheless, more recent studies have shown a significantly higher 30-day survival in patients admitted to hospital after an OHCA due to PE and who underwent thrombolysis during Cardiopulmonary Resuscitation (CPR) compared with patients who did not [6,7].

We present a case of a woman suffering from refractory IHCA in an emergency-care setting who underwent approximately 65 minutes of CPR and treated with fibrinolytic, achieving a Return of Spontaneous Circulation (ROSC) and an excellent neurological outcome.

A 53-year-old woman with a story of smoking, hypertension, elevated Body Mass Index (BMI), and a family history notable for ischemic heart disease developed persistent severe chest pain at rest. She was brought by ambulance directly to the emergency room. A 12-lead Electrocardiogram (ECG) was performed during transport, showing posterior-inferior STEMI (Figure 1). A few minutes after arrival at the emergency department, the patient experienced ventricular tachycardia and cardiac arrest. 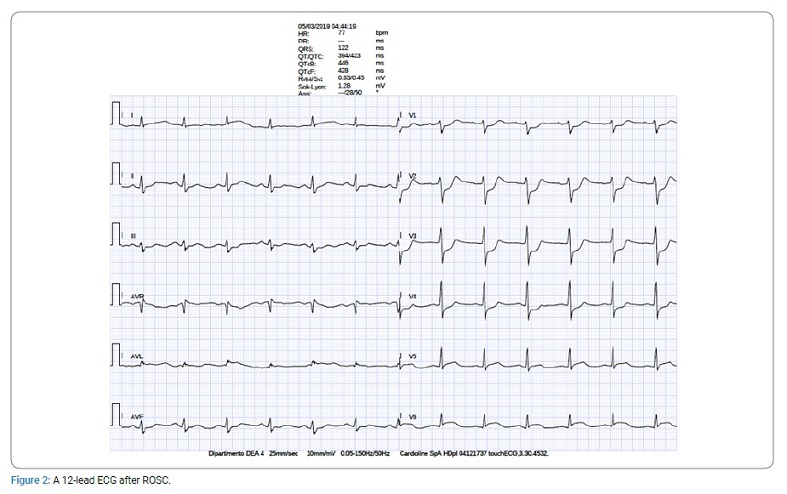 Therefore she was transferred to the catheterization laboratory for coronary angiography performed approximately after 3 hours for hemodynamic instability and severe risk of bleeding after administration of a fibrinolytic drug, although Alteplase has a short half-life (Figure 3A). The first coronary angiography revealed only a partial thrombotic occlusion of the left Coronary Artery LCA (A), while the Right Coronary Artery (RCA) showed severe stenosis (Figure 3B). The not complete occlusion of LCA was probably the effect of Alteplase. 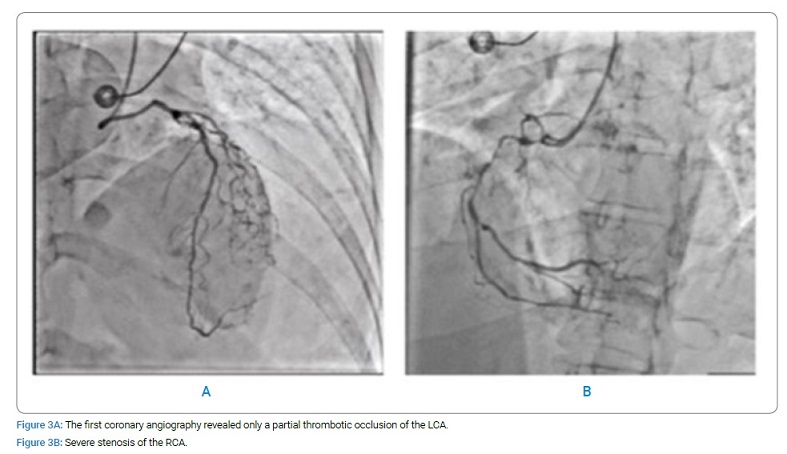 After 24 hours, a second coronary angiography was performed, and two stents were implanted: one in the RCA (Figure 4A) and one in the left circumflex artery (Figure 4B). After the procedure, the patient was transferred to the cardiological intensive care unit in stable clinical conditions where she underwent therapeutic hypothermia, with a good neurological outcome (GCS 15).

Mortality rates in patients suffering from cardiac arrest due to STEMI are high, and the chance of survival without neurological sequelae decreases dramatically with every passing minute [2,9].

Our case report demonstrates that even after a cardiac arrest with prolonged time until ROSC, more than 1 hour in this specific case, survival with a favorable neurological outcome is possible. European Society of Cardiology guidelines for the management of acute myocardial infarction 4, do not recommend fibrinolysis during ACLS to treat cardiac arrest due to myocardial infarction [8].

In our case, the quality of CPR and the use of fibrinolysis, even if not recommended by current guidelines, substantially made a difference for the neurological outcome.

Despite prolong ACLS and a delay of 65 min till ROSC, our patient showed a remarkably favorable neurological outcome during the clinical course.

During cardiac arrest, an etiologic diagnosis is crucial to choose the best therapeutic strategy. In our case, clinical symptoms and electrocardiographic signs of cardiac ischemia during the pre-arrest phase influenced the in-arrest decision-making process. While the rhythm was still interpreted as shockable and RCP/Drug therapy was delivered, fibrinolysis treatment was also considered and therefore applied. It is plausible to assess that the outcome of the patient was influenced by therapy.

Why should a physician be aware of this?

The use of fibrinolysis during cardiac arrest due to myocardial infarction is a controversial issue: current guidelines for the management of acute myocardial infarction in patients presenting with ST-segment elevation do not recommend fibrinolytic therapy during refractory cardiac arrest due to the bleeding risk and its low level of effectiveness. On the other hand, these guidelines are based on out of hospital studies, and most of them concern shockable rhythms [4]. Two retrospective studies [2,3] analyzing survival ratio and neurological outcome of patients who had undergone thrombolysis during CPR, have been shown encouraging results. These contradictory results may be due to selection bias: in the out-of-hospital studies, there were a high proportion of both relatively young patients and witnessed cardiac arrests; while, a high proportion of patients with VF doubtlessly contributed to the result of a favorable outcome in the retrospective studies.

In conclusion, even if it is necessary to deepen our knowledge of this issue, recent studies are reviewing the role of fibrinolysis in cardiac arrest, but further investigations are needed.

Availability of Data and Materials

The patient data and figures of this manuscript is available from the authors on request.

Ethics Approval and Consent to Participate

The patient’s written informed consent was obtained for the publication of the case report concerning herself.

The patient gave consent to her data being published in the Journal.

The authors declare that they have no competing interests.

© 2021 Gabriele Valli. This is an open access article distributed under the terms of the Creative Commons Attribution 4.0 International License (CC BY-4.0).