A young gentleman aged 22-year-old was referred to the trauma and Orthopaedics department with post-traumatic swelling and pain in his right hand for -one week- duration. The mechanism of trauma was due to uncouth crush injury. The underlying lesion was a dorsal dislocation of the carpometacarpal (CMC) joints of the right ring and little fingers. Despite being lately presented to us due to a delay in the diagnosis, a closed reduction trial under local anesthetic infiltration was performed. The reduction of the dislocations was succeeded initially. Therefore, a below elbow ulnar gutter slab was applied. As it was thought that the reduction might be unstable and the dislocation would recur, we advised a one-week follow-up in the clinic, but the patient missed it. The next show in the visit, after three weeks, showed a stable reduction. Eventually, the patient has regained most of his hand function and range of motion, as was evident in the consecutive follow-up visits. This has been achieved by closed reduction and slab immobilization for a total of six weeks followed by a period of effective physiotherapy. Although it is an uncommon injury that is treated surgically, there is still a role for closed reduction and conservative management if done properly and if the patient is compliant enough, even if it is not presented acutely. It is Worth to mention, the role of physiotherapy treatment in providing a pain-free range of motion and good grip power of the affected hand during the treatment period.

Carpometacarpal (CMC) joint dislocations of the fingers are uncommon injuries that mainly occur in young adults and represent less than 1% of all hand lesions. The common injury mechanism is axial loading forces transmitted through the wrist and hand, especially with a closed fist [1].The dorsal carpometacarpal ligaments are stronger than the volar ones. Together with the wrist extensor restraints, this potential difference causes failure of the bone dorsally with subsequent rupture of the weaker volar ligaments. As a result, dorsal fracture-dislocations tend to occur more commonly than volar dislocations in the CMC joints. Initially, the injury is often missed. This could be attributed to the diffuse hand and wrist swelling that usually prevails in such high-energy injuries. Besides, the lack of experience among non-orthopedics doctors to read such complex hand and wrist X-rays overlapped bones at the sites of dislocations. Distinctly, most cases presented in the literature advocate reduction with operative stabilization to prevent secondary dislocation with chronic disabilities and complications. Furthermore, some authors have found that conservative management could be successful, providing immediate diagnosis and reduction have been established [2]. In our current study, we report successful non-operative management in a case with post-traumatic ulnar carpometacarpal joints dislocations despite being missed for -one week -post-trauma.

A 22-year-old male, who is a right-handed manual worker, presented to our same daycare complaining of post-traumatic pain and swelling of his Right hand for one week. He had a crush injury to his hand caused by a metal door flap one week before the presentation. On the same day of injury, he was reviewed, clinically and radiologically, in our A & E department and diagnosed as having contusion to his right hand and treated with analgesia, and discharged from the Emergency Department. Fortunately, after reviewing the patient hand’s X-rays, he has been recalled to the Hospital after discovering a missed dislocation of the 4thand 5th carpometacarpal joints “CMCJ” with loss of the normal single point intersection of metacarpal cascade lines. Additionally, there was an interruption of the M-line parallelism of the CMC joints.

Moreover, the discontinuity between the metacarpal bases and the hamate bone was so evident in the lateral view (Figure 1). 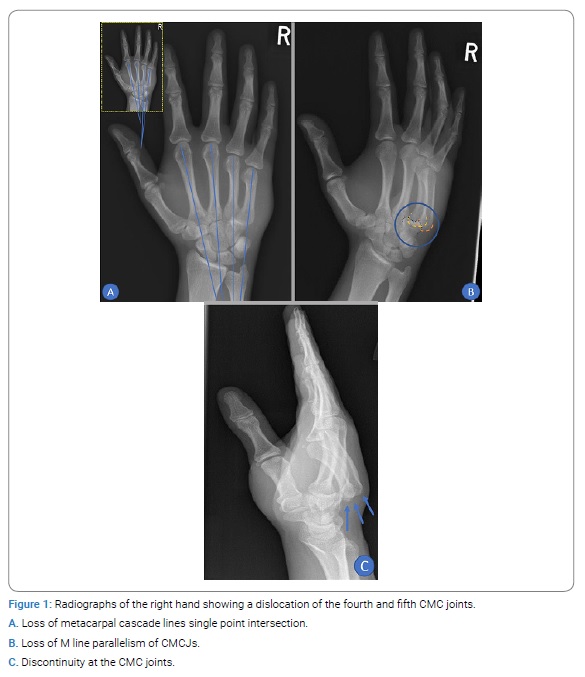 The lateral four metacarpal cascade lines imposed on the anteroposterior radiograph should all meet at the single intersection point on a normal hand [3]. On examination, the patient’s right hand was found to be deformed with a dorsal hump and tenderness. The overlying skin was intact without any breaks or tenting. The range of motion of the lateral three little fingers and wrist was greatly restricted and painful. The neurovascular examination of the right hand revealed no abnormality. The on-call Orthopedics doctor decided to give a trial of reduction for the dislocation despite being missed for one week. This was explained to the patient with a high possibility of failure or redislocation. After the patient gave his verbal consent to the procedure, nitrous oxide through a face mask was administered, and local infiltration with 2% lidocaine was performed deeply and intra-articular at the site of the 4thand 5th CMCJ. After ten minutes from the infiltration, axial traction was applied along the ring and little fingers axes simultaneously with proximal to distal thumb pressure over the dorsal hump. The manipulation was pain-free and when the reduction completion was thought to be successful, indicated by correction of the hump deformity, an ulnar gutter slab was applied and well molded at the dislocation site. Post reduction X-rays showed a successful reduction with a regain of the metacarpal cascade lines single intersection and the M-parallelism of the CMCJs (Figure 2). 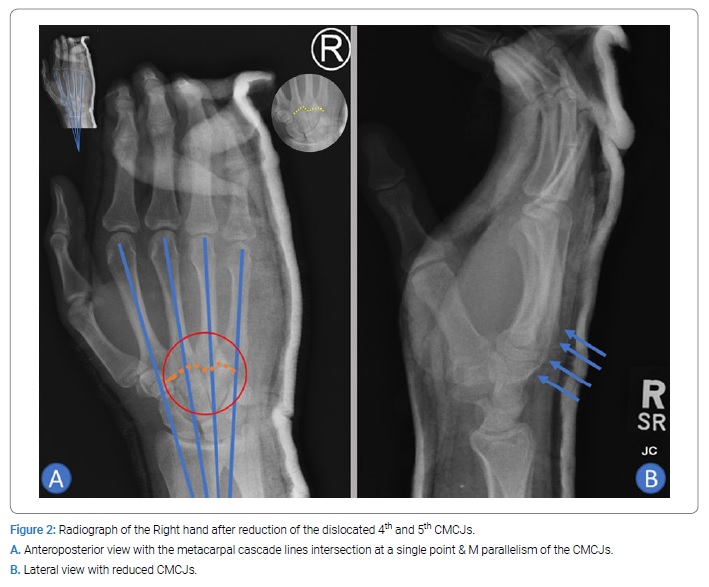 After checking the right hand’s neural and vascular integrity, the patient was discharged home on proper analgesia and with a clinic appointment after one week. The patient missed his one-week follow-up and showed in the clinic after three weeks when unexpectedly, the new X-ray showed a maintained reduction of the injured joints. As the results were encouraging, and the reduction had been maintained for three weeks, we decided to keep the same immobilization for additional three weeks. After three weeks, the patient was reviewed, and X-rays were performed before and after removing the ulnar gutter slab. The result after six weeks of reduction was strongly in favor of stable reduction. The motion of the wrist and fingers was restricted, and he had a weak grip. Therefore, the slab was discarded, and active range of motion and grip strength exercises in addition to physiotherapy was advised. After twelve weeks of reduction, the patient regained full range of motion of the wrist but only occasional pain and inability to make a complete fist, lacking 2 cm to 3 cm of full flexion into the distal palmar crease.

Further, after eighteen weeks from the reduction date, follow-up showed improvement of the gripping power to normal, but with the persistence of the non-occasional mild pain. The patient had no limitation of his daily activity and returned to his manual work without any restrictions. Regarding the grip strength, measured using the dynamometer, the right hand regained 90% of its grip power compared to the left side (Figure 3). 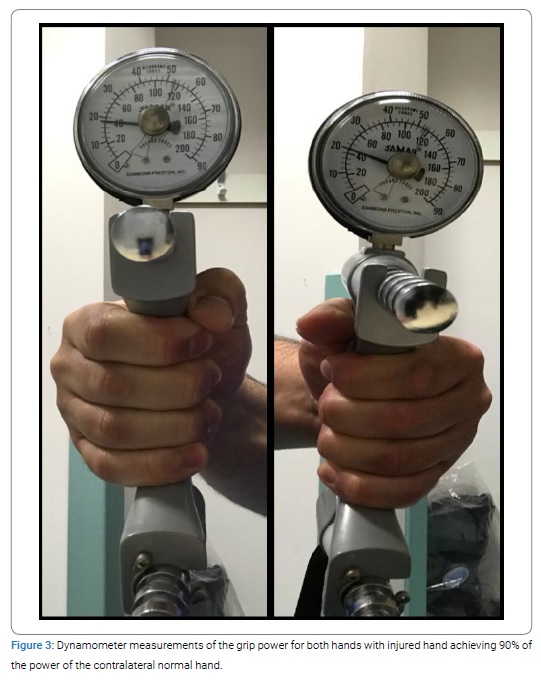 Based upon those satisfactory results, the patient has been advised to continue normal activities and physiotherapy and to visit our surgery in a period of eight to ten months.

Traumatic dislocations of the CMC Joints of the ulnar four fingers of the hand constitute less than 1% of all hand traumas. These dislocations tend to go dorsal than palmar literally because of the stronger dorsal ligaments and the weaker and more prone to fail, palmer ligaments [4]. Furthermore, the ring and little fingers CMCJ dislocations are more frequent than those of the index and middle fingers [5] this could be explained by the fact that the index and middle fingers CMCJ are more rigid and stable those of the ring and little fingers. They only have limited anteroposterior gliding movement. On the other hand, the middle finger CMCJ has a flexion-extension movement, and the little finger CMCJ has both flexion-extension and rotational movements. This could be attributed to the saddle structure and the loose ligaments of the latter [2]. The gross range of motion for the index and middle CMC joints is wider than those of the ring and little fingers. This regards flexion/extension, pronation/supination, and ulnar/radial deviations. Over and above, the little finger CMC joints have the widest range of motion between the other CMC joints, even if it is affected by the contribution from the CMC joint of the ring finger [6]. The most common mechanism causing such injuries is high-energy trauma, which usually causes multiple injuries, leading to this dislocation being overlooked. In our case, despite having isolated injury with pure dislocation of the CMCJ of the ring and little fingers, the injury was initially missed by the A&E doctors but luckily was discovered by the radiologists after one week. Therefore, a prompt radiological examination is essential in addition to a thorough clinical examination to avoid missing such injuries. On the anteroposterior views, a single point intersection between the metacarpal’s long axes [3] or intact M-line parallelism of the CMC joints is a reliable way to exclude dislocations of the CMC joints.

Furthermore, lateral views and different oblique views are helpful in the diagnosis of those dislocations. If it is still not proved with the routine radiographs, computed tomography is indicated as a definite diagnosis [2]. If not treated properly or missed, the CMC joints dislocation can cause evident functional incompetence of the hand and wrist regardless of apparent deformities. This necessitates the proper and timely reduction of those joints. Once dislocation of the CMC joint is diagnosed, the closed reduction should be attempted. This is usually applied during the first two days. However, then it becomes more difficult or mushy reduction due to bonny overlap or soft tissue interposition [7]. As it is believed that anatomic reduction would give the best functional results, the main method of treatment of CMCJ dislocations remains the surgical treatment [7] either with closed reduction and percutaneous pinning [8] or with open reduction internal fixation [9]. One study concluded that clinical outcomes after K-wire fixation are predominant for plate fixation for fourth and fifth carpometacarpal fracture-dislocations. This is concerning hand functions related to work. Therefore, the study has considered the K- wire fixation as the gold-standard technique for treating fourth and fifth CMC fracture-dislocations [10] another study also favored the percutaneous pinning fixation to the plate and screws fixation but based on the significance of the functional impairment after ORIF requiring reoperation. Otherwise, both techniques showed good functional outcomes [11]. Notwithstanding, there have been successful trials for closed reduction and immobilization in a slab that has been reported in the literature as definite ways of treatment [2,12,13]. Apparently, in cases where malalignment of CMCJ reductions occur, there are associated complications such as arthrosis, tendonitis, median neuropathy, carpal instability, and complex regional pain syndrome. Those potential complications will affect the hand and wrist function. Therefore, radiological follow-up within the first two weeks of satisfactory reduction is very important to ensure that the reduction is maintained, especially with cases treated conservatively [14]. In our reported case, the closed reduction under local anesthesia and slab immobilization have been successful as an ultimate way of treatment. This has been achieved even with the delay of the diagnosis and, subsequently, the management. This has been a controversy to most of the literature data which favors the surgical intervention, and even those that report successful conservative management have emphasized the early treatment within the first two days to have a chance for success.

© 2021 Ehab Hussin. This is an open access article distributed under the terms of the Creative Commons Attribution 4.0 International License (CC BY-4.0).