Classical/mechanobullous Epidermolysis Bullosa Acquisita (EBA) presents with acquired fragility, trauma-induced blistering, milia, and scarring. Bullous SLE BSLE is an inflammatory disease with neutrophil-rich blisters on sun-exposed sites. We present a rare case of chronic SLE who developed an acquired immunobullous disease with clinical features of EBA rather than BSLE.

A 32-year-old woman with an eight-year history of Systemic Lupus Erythematosus (SLE) manifests as arthritis, serositis, and pericarditis presented with a two-year history of nasal ulceration, hemorrhagic blisters, and ulcers of the oral mucosa, and recent onset skin fragility.

Her skin had sheared off after wax epilation and on removing adhesive dressings. She was also aware of progressive scalp hair loss. Her arthritis was well controlled on long-term treatment with hydroxychloroquine 200 mg b.d.

She also took aspirin 75 mg daily and lansoprazole 30 mg daily and had previously been treated with azathioprine and prednisolone.

Examination revealed erosions and tense fluid-filled bullae on a non-inflammatory base on friction-prone sites (Figure 1a) and milia on the dorsa of her hands (Figure 1b). She also had a serosanguinous blister on the lower lip (Figure 1c) and the tongue and palate’s erosions. There was a patchy loss of scalp hair and effacement of follicular orifices on dermoscopy. 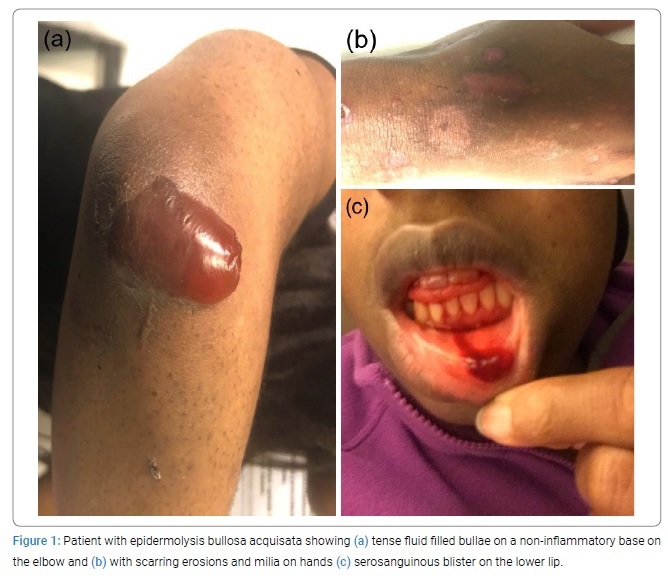 Histology of a fresh blister demonstrated a poor cell subepidermal blister (Figure 2a). Direct Immuno Fluorescence (DIF) of perilesional skin showed linear deposition of IgG and C3 along the basement membrane zone. A scalp biopsy showed a reduced number of follicles, perifollicular concentric scarring indicative of scarring alopecia, and subepidermal splitting tracking down the top of a hair follicle (Figure 2b). Indirect Immuno Fluorescence (IIF) of serum was negative for both IgG and IgA antibodies, but Enzyme-Linked Immunosorbent Assay (ELISA) was positive for auto-antibodies against Non-Collagenous (NC1) domain of type VII collagen (Col7). Repeat ELISA also detected antibodies to Bullous Pemphigoid (BP) 180 and 230. She was anemic (Hb 105 g/L), and her lupus serology remained strongly positive with ANA titre 1:2560 and positive ENA (anti Ro and RNP) consistent with active SLE.

Autoantibodies against NC1 Col7 are characteristic of two distinct subepidermal immunobullous diseases, Epidermolysis Bullosa Acquisita (EBA) and bullous SLE (BSLE) [1]. Although EBA first was described over a century ago, it was not until 1971 that clinical diagnostic criteria were suggested [2].Classical/mechanobullous EBA presents acquired fragility, trauma-induced blistering, milia, and scarring [3]. Scarring alopecia and nail dystrophy may also occur, and the blistering is typically cell-poor [3]. BSLE was described later in 1973 as an inflammatory disease with neutrophil-rich blisters on sun-exposed sites [4]. The phenotypic boundary is blurred by the later recognition of an inflammatory variant of EBA [3].

Despite having SLE, our patient has typical clinical features of mechanobullous EBA rather than BSLE. This appears to be a very rare phenomenon. The first case of EBA occurring in a patient was SLE was reported in 1981, and literature review revealed only three additional cases [5,6]. Her skin disease has failed to respond to hydroxychloroquine and colchicine. There is no drug of choice for mechanobullous EBA, and the response to immunosuppressants is usually disappointing [3]. We have started her on Dapsone, the usual drug of choice for BSLE, [6], and we will monitor her closely for anemia.

The 2018 updated diagnostic criteria for EBA proposed by the International Bullous Disease Group (IBDG) include either a serological test (Col7 specific ELISA, IIF with NC1 Col7-transfected human cells, immunoblotting, IIF on skin deficient in Col7, indirect immunoelectron microscopy (IEM)) or tests on skin or mucous membrane (direct IEM, serration pattern analysis by DIF and fluorescent overlay antigen mapping) [1]. However, most of these are only available in specialized centers, and they do not distinguish between EBA and BSLE [1].

In conclusion, we describe a patient with chronic SLE who developed an acquired immunobullous disease with EBA clinical features rather than BSLE. It remains to be understood why auto-antibodies against Col7 can lead to such diverse phenotype, and the dual antibody profile (EBA and BP) raises the issue of epitope spreading [7].

© 2021 Maham Khan. This is an open access article distributed under the terms of the Creative Commons Attribution 4.0 International License (CC BY-4.0).