We describe a case of a newborn presenting type III esophageal atresia associated with unilateral pulmonary atresia and dextrocardia. To our knowledge, this combination of congenital defects has never been reported before. We discuss the difficulties in diagnosis.

Esophageal Atresia (EA) with an associated Tracheoesophageal Fistula (TEF) makes for a difficult antenatal diagnosis, with only 22% of cases being identified during pregnancy [1]. Malformations associated with esophageal atresia are common. EA with TEF and unilateral pulmonary atresia is a rare and highly lethal combination [2].

Dextrocardia is another rare condition, with instances occurring in approximately 1 of 12,000 pregnancies [3], mostly presenting in situs solitus (47%), versus 30% in situs ambiguous and 23% in situs inversus [4]. Dextrocardia is associated with a wide spectrum of complex cardiac congenital malformations [4,5]. We here report a rare case of a combination of these anomalies.

To our knowledge, this is the first reported case of EA with TEF and unilateral pulmonary atresia in a patient with dextrocardia in situs solitus.

A 32-year-old woman, gravida 2 para 1, was referred to us after her second-trimester systematic fetal ultrasound exam revealed the fetal heart in the right hemithorax and a Single Umbilical Artery (SUA) (Figure 1). 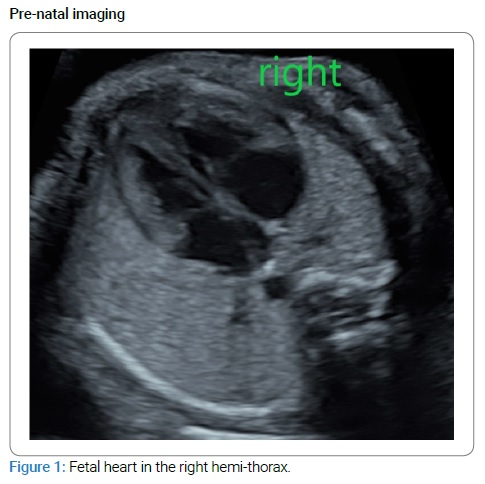 The patient did not have any notable medical history aside from active smoking (at the rate of five cigarettes per day). No alcohol consumption or drug use was declared. The medical family background was unknown (patient adopted). The patient’s first child (a female born in 2019) is in good health.

Other pregnancy data were the following: nuchal translucency of 1.19 mm when a crown-rump length was 58.8 mm and trisomy 21 risk ratio being 1/10,000.

The ultrasound at 24 weeks of amenorrhea and two days revealed a eutrophic male fetus, a dextrocardia in situs solitus, and SUA. A proposal of amniocentesis was made during a genetic consultation, which the patient declined. Fetal cardiac ultrasound at 27 WA + 6 days revealed an isolated right deviation of the heart, suggestive of a left diaphragmatic hernia.

The woman was then referred to our tertiary center. Ultrasound at 28 WA and two days revealed cardiac heterotaxia and bronchial isomerism with no interruption in the diaphragmatic cupula continuity (Figure 2,3,4). 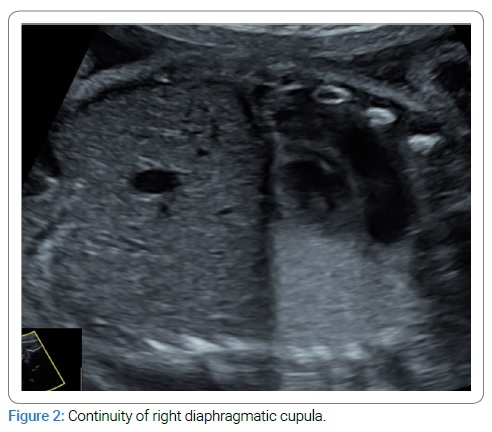 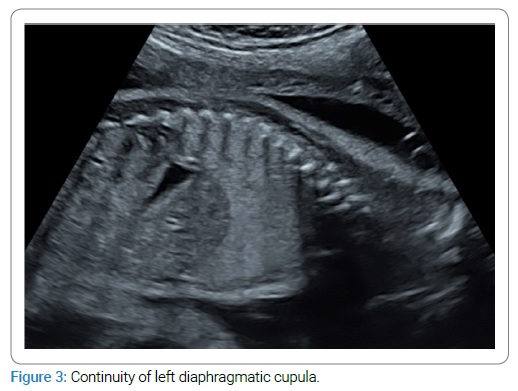 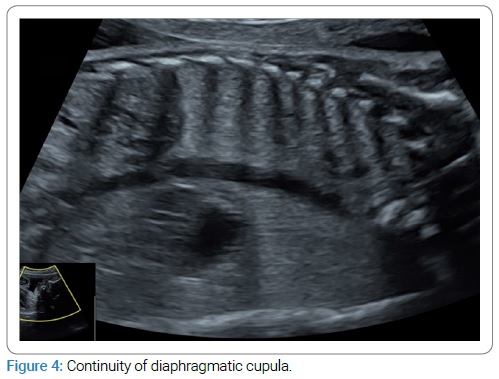 This finding was typical, and so we did not perform an MRI. Repeated ultrasounds revealed no other fetal abnormalities or hydramnios. The patient insisted on giving birth in the level 1 maternity ward closest to her home.

An emergency cesarean section was performed at 36 WA + 1 day because of an abnormal fetal heart rate after premature rupture of the membranes. A male infant weighing 2380 g was born with an Apgar score of 8/9/10. Then, the newborn presented with secondary respiratory distress, requiring intubation and emergency transfer to a level 3 pediatric unit. Pulmonary radiography suggested a type III esophageal atresia.

Surgery was performed on day 1 to cure the atresia and close the tracheoesophageal fistula, with success. Surgical exploration and complementary exams showed: a type III esophageal atresia, a dextrocardia, and a severe right pulmonary atresia associated with right pulmonary artery hypoplasia. The cardiac analysis confirmed dextrocardia, associated with patent foramen ovale and atrial septal defect, without pulmonary arterial hypertension. The newborn’s evolution was favorable under noninvasive ventilation during sleeping periods. The patient benefits from a regular cardiologic and pulmonary follow-up, without any need for more therapeutics at the moment.

In this case, ultrasound examinations identified abnormalities; however, an MRI may have provided a much more detailed diagnosis. Not performing an MRI, in this case, led to suboptimal care (transferal of the patient after birth). MRI explorations should be performed when a situs abnormality is detected in an ultrasound, given the high risk of lesions often associated.

We do not know whether or not the multiple abnormalities, in this case, are associated with one another. The multifactorial etiology of this complex set of defects is clear, as all of the extensive genetic explorations came back negative. No environmental influence other than active smoking was identified, without any documented evidence at the moment linking this lifestyle habit to a higher rate of congenital malformations.

Putting this aside, we believe that the combination is rare, and thus reporting this condition may be worthy for future study.

© 2021 HARTER Hélène. This is an open access article distributed under the terms of the Creative Commons Attribution 4.0 International License (CC BY-4.0).