Orbital granulocytic sarcoma involving the central nervous system and coinciding with acute megakaryoblastic leukemia is a rare complication of this disease. We report a case of a previously healthy male infant 20-month-old who developed acute megakaryoblastic leukemia and in whom the initial diagnosis was difficult because of associated severe myelofibrosis. We focus on this report on the clinical and cyto-histological features and problems concerning differential diagnosis and the importance of risk group stratification to identify specific relapse risks and select the most appropriate treatment, intensive-timing chemotherapy regimen, or HSCT obtain good outcomes.

Granulocytic Sarcoma (GS), previously known as chloroma, is a solid tumor of myeloid precursor cells described for the first time by Burns in the early 19th  century and originally termed chloroma by Knight in 1853 due to its green color attributed to the enzyme Myeloperoxidase (MPO). Later changed to GS by Rappaport in 1966, following reports of cases in which the tumor was not green and had sarcoma’s gross features [1–3]. This led to frequent misdiagnosis as high as 75% in a historical study in 1986 and lower incidence (25%–47%) in more recent reports. However, the diagnosis of GS in the absence of myeloid leukemia still poses a diagnostic challenge, and most patients were mistaken as suffering from malignant lymphoma [4–11]. Since Dock first noted the association of GS with Acute Myeloid Leukemia (AML) the tumor has been reported more frequently in patients with AML, especially in children and is described as a solid tumor of immature granulocytic precursor cells, not always composed of granulocytes so terms as extramedullary tumors or extramedullary leukemia have also been proposed [12–17]. It presents as an extramedullary mass, and a manifestation of any myeloproliferative disorder that most frequently affects the bones of the skull, sternum or ribs, peritoneum, lymph nodes, and occasionally soft tissues around the dura, sinuses and orbit, and is included as one of the major subgroups of myeloid neoplasms and acute leukemia in the WHO classification [3,11,14,18] GS is more common in pediatric patients, especially younger than 15 years old, and many cases have been reported in the head and neck region, but the most frequent presentation is unilateral exophthalmos due to orbit involvement (OGS) and occurs associated with Acute Myeloid Leukemia (AML), mainly AMLM2 or AML with a monocytic component (M4 or M5) [10,17,19–27]. 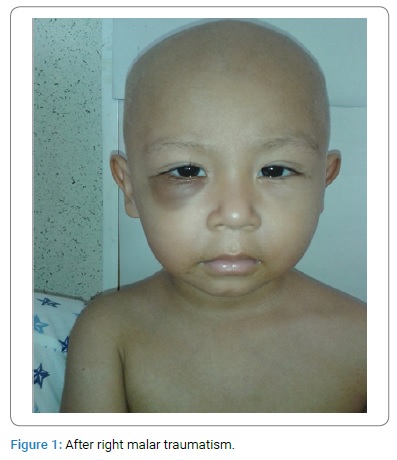 Two weeks later, he was seen in the outpatient department to present a rapidly progressive bilateral ocular proptosis, right eye pain, epiphora, chemosis, and severe bilateral upper and lower eyelid oedema (Figure 4), a left cervical enlarged lymph node, and pancytopenia. Blood smear analysis showed a steady increase in the number of circulating blasts during the following week (5%–10%–30%), some with cytoplasmic protrusion or blebs; BMA and the immunologic profile established the diagnosis of AMKL by the expression on blast cells of platelet specific markers CD41 (78%), CD42 (68%) and CD61 (98%) by multiparameter flow cytometry. Bone marrow biopsy was reported compatible with acute megakaryoblastic leukemia. Six hours after BMA and biopsy, the patient was admitted to the hematology ward because of continuous bleeding in the puncture site, which required treatment with platelet concentrates, and an urgent diagnostic work-up was programmed that included cranial simple and contrasted computed tomography (CT) scans and magnetic resonance imaging (MRI) of both orbits, excisional biopsy of the retroorbital tumor and left cervical excisional biopsy. 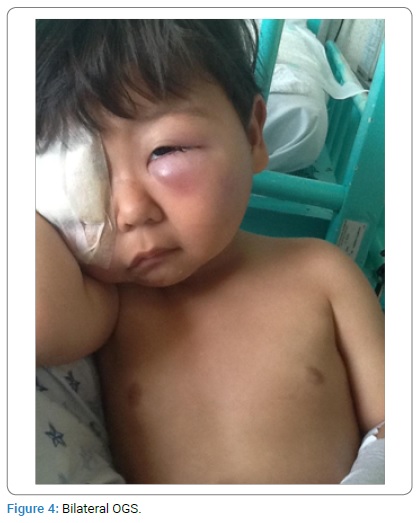 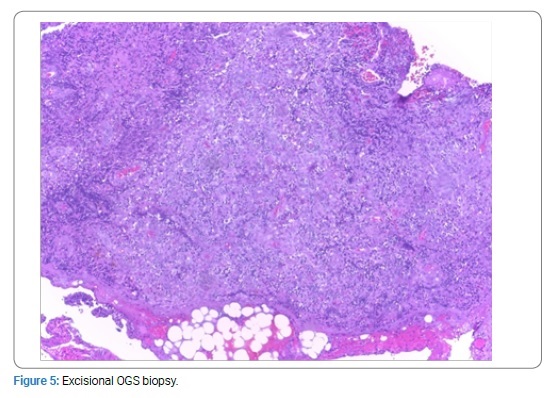 Fragment of soft tissues with a neoplastic infiltration of medium to large blast cells with a variable nucleocytoplasmic ratio, an oval nucleus with fine stippled chromatin and 1 to 3 inconspicuous nucleoli forming a sheet cell lamina and numerous mitosis. 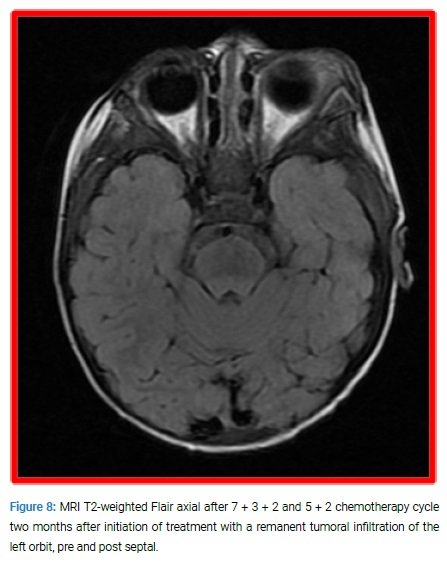 Two months after chemotherapy initiation, there was a significant clinical improvement with prompt resolution of both retroorbital and cerebral tumors, and the patient attained complete remission three months later (Figure 9). 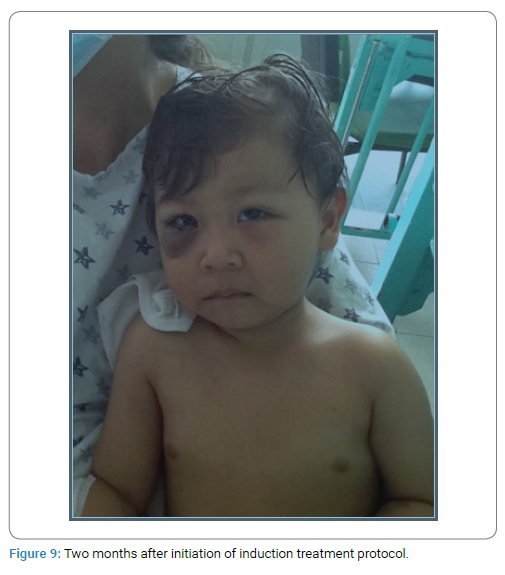 GS are rare solid tumors of immature myeloid precursor cells that presents as an extramedullary mass or a manifestation of myelodysplastic syndrome, chronic myeloid leukemia or any myeloproliferative disorder, and has been reported with an incidence of 2/1.000.000 in adults or 3%–9.1% in myeloproliferative disorders [4,11,28–30]. In the retrospective study of Dusenbery et al. of the Children´s Cancer Group of 1832 patients with newly diagnosed AML, 199 (10.9%) had evidence of extramedullary leukemia, and these 12 (0.65%) corresponded to orbital GS. In contrast, Johnston et al. in a more recent study of the Children Oncology Group, reported that out of 1459 analyzed pediatric patients with AML, 99 (7.3%) presented myeloid sarcoma., 1% CNS sarcoma, and 2% OGS [17,31]. The mean age of presentation in childhood varies between 7 years and 8.8 years [23,32,33]. Orbit GS (OGS) has been reported to be more prevalent in countries from Asia, Africa, and Latin America, [32–36] and occurs associated with acute myeloid leukemia (AML), mainly AML-M2 with t (8;21) (q22;q22) or AML with a monocytic component (M4 or M5) [10,17,19–25,37].

GS can precede acute leukemia (de novo), present concurrently or during the disease (relapse) [3,5,9,10,12,23]. When GS occurs in patients with known AML or other myeloproliferative disorder, there is usually a little difficult for the clinician to establish and for the pathologist to make a correct diagnosis, but when GS precedes the development of AML or when it develops in a subtype of AML-AMKL-that frequently presents with severe myelofibrosis, diagnosis can be extremely difficult [3,5,8,9,11]. In our case, although the onset of symptoms, initial laboratory features, and a high clinical awareness suggested acute leukemia, it took four months to establish a definitive diagnosis. We attributed this to the slowly progressive clinical course of the disease extending over months, the presence of severe myelofibrosis, repeated BMA resulting in dry taps, and a late clinical event resembling “blast crisis” of chronic myeloproliferative disorders, as indicated by a steady increase in the number of blast cells in peripheral blood and BMA smears observed in the last month of follow-up, similar to the evolution of some cases of childhood AMKL as previously reported [38–40].

OGS is a rare event, and its presence in patients with a previous myeloproliferative disorder suggests an impending blast crisis or leukemic transformation, or the initial manifestation of relapse in a previously treated AML patient in remission, but in patients, without known hematologic diseases, it should alert clinicians to start a thorough, immediate search of AML, non-Hodgkin or histiocytic lymphoma, metastatic neuroblastoma, rhabdomyosarcoma, and small round blue cell tumors, by BMA and biopsy, tissue biopsy stained with H&E, and immunohistochemical methods, multiparameter flow cytometry, FISH, CT, and MRI scans, FDG-PET CT for an early diagnosis and prompt and optimal treatment.

One of the first cases of OGS and intracranial tumors in AMKL was reported by Slavic et al. in 1991 in an 8-month child who responded well with a sharp reduction of intracranial masses two weeks after initiation of antileukemic therapy. However, unfortunately, the patient died of bacteremia 5 weeks after starting treatment. More recently, the case of Baldwin and Mian, that had a complete response to chemotherapy and local radiotherapy [24,41]. Although OGS is a rare event, in a series of 633 patients with AML treated in SJCRH over 30 years, 30 (4.7%) had one or more at some point in the course of their disease, and 13 (2%) had OGS, but despite its rarity, subcutaneous tissue and orbit were the most frequently affected sites. Another interesting issue of the report was that the tumor resolved completely within three months in 14/31(45.2%) patients treated with chemotherapy alone [42], as in the present case. Leukemic involvement of the central nervous system was common before effective chemotherapy protocols and was the first site of relapse in nearly 50% of children in remission previous to the incorporation of prophylactic therapy to the CNS in posterior protocols [43]. Masses within the brain are uncommon and were reported occasionally in acute leukemia until the middle of 1990s when two reviews and a casuistic of patients referred to its higher frequency in AML, its radiologic features, and highlighted the importance of early chemotherapy and radiotherapy to treat these complications [29,31,43–46].

It is difficult to speculate why our patient responded so well after the initiation of chemotherapy. May be because he was treated aggressively, or because his leukemia was not inherently aggressive, or because of both factors is not clear. Since the early 1990s, and based on different response rates observed in early-onset AMKL in infants with Down´s syndrome and t (1;22) (p13; q13) or later in life, investigators were intrigued and started wondering if this was one or several diseases [47]. Although several subsequent reports indicated that the t (1;22) (p13;q13) was a nonrandom marker and restricted to infant AMKL, but that some cases expressed clinical and genetic heterogeneity, similar to some patients in our country [48–51]. In 2002 the Groupe Français de Cytogénétique Hématologique identified nine cytogenetic groups in childhood and adult megakaryoblastic leukemia, confirming different subtypes of the same disease, four of which were exclusively composed of children: (group 1) patients with Down’s syndrome, (group 2) numerical abnormalities only, (group 3) t (1;22) (p13; q 13) (group 4) t (9;22) (q34; q11).

In the last decade, several groups of investigators have identified aggressive subtypes of pediatric AMKL, and four years ago, de Rooij et al. pointed out that recurrent abnormalities identified in nearly half of the patients by deep sequencing studies could be used for risk group stratification and included as a low/intermediate risk factor t (1;22) (p13; q13) resulting in a chimeric fusion RBM15/MKL1 and patients without any of the four specified cytogenetic abnormalities and patients with the CBFA2T3/GLIS2, rearranged KMT2A, NUP98/KDM5A, and monosomy 7 as high-risk factors in AMKL [52–55].

In conclusion, we can only speculate if the good response in our patient was the result of early intensive treatment as has been reported recently by the Children´s Oncology Group in patients with AML treated with an intensive-timing chemotherapy regimen which showed an excellent outcome in OGS and CNS GS or because he had an inherently less aggressive AMKL, or both factors [31].

© 2021 Rogelio Paredes-Aguilera. This is an open access article distributed under the terms of the Creative Commons Attribution 4.0 International License (CC BY-4.0).