Pericardial Effusion in an Eight-Year-Old with Chronic Renal Disease

Pericardial effusions are not unusual in Chronic Kidney Disease (CKD). They can be related to renal disorder or have different etiologies, which must be investigated in each patient. We report an 8-year-old with CKD and asymptomatic pericardial effusion and discuss the diagnostic considerations and investigative paradigm. After an extensive investigation, we concluded that our patient represents the first pediatric case of Minoxidil-associated pericardial effusion.

An 8-year-old patient with chronic renal failure complained of severe abdominal pain at her routine dialysis appointment. Her evaluation included an abdominal X-Ray (Figure 1) which revealed cardiomegaly. This led to a cardiac consultation. 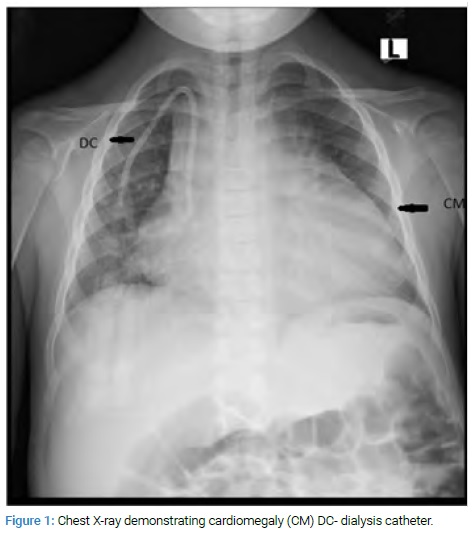 She initially presented at three months of age with anasarca. Investigations were consistent with a diagnosis of congenital nephrotic syndrome. On cardiovascular examination, she was noted to have a murmur and an echocardiogram demonstrating mild valvar and supravalvar pulmonary stenosis. The stenosis never required intervention, but she had annual echo cardiographic evaluations, the last of which was three months before this presentation.

Her initial treatment regime consisted of frequent albumin supplementation and anti-hypertensive medications until about three years prior to presentation, when she developed a progressive increase in creatinine and was placed on intermittent hemodialysis. Her other comorbidities included hypothyroidism, failure to thrive, constipation, and developmental delay. Her medications consisted of levothyroxine; multiple anti-hypertensives including lisinopril, minoxidil, and amlodipine; nutritional supplements and erythropoietin.

On examination, she was well-appearing and mildly dysmorphic with low set ears and hypertelorism. She also had hypertrichosis. She was mildly tachycardic with a heart rate of 120 bpm and BP 140/82 mmHg. On cardiac examination, she had a grade 3/6 soft systolic murmur in the left parasternal area. The rest of the examination was normal. She had an echocardiogram (Figure 2) which confirmed the suspicion of a large pericardial effusion.

Extensive investigations (Hb 11 gm%, normal albumin of 4 gm%, as well as baseline renal function) and a rheumatological evaluation (ANA, normal ESR, and CRP) were done to determine the cause of the pericardial effusion, all of which were normal. In addition, a planned diagnostic and therapeutic pericardiocentesis were done. The drain was left in place for three days and removed with a resolution of the effusion. The effusion revealed a relatively high protein content of 3.9 gm%, LDH of 139 IU, normal glucose, and normal cytology, with very few white cells excluded a malignant or infective process. The fluid cultures were all negative, as was the PCR for tuberculosis.

Many causes of pericarditis are grouped into idiopathic, infectious, inflammatory, drug-induced, metabolic, neoplastic trauma, or disease in the neighboring structures.

For a typical patient, first-level tests such as a complete blood count, basic metabolic panel, liver function tests, and thyroid-stimulating hormone levels are recommended and may suggest a particular etiology such as uremia or infection. Our patient received an extensive evaluation to exclude the more common causes of pericardial effusion. Unlike pleural effusions, there is an overlap between transudative and exudative manifestations in most etiologies of pericardial disease except for tuberculosis which is always an exudative effusion. Thus the fluid analysis is of importance primarily to exclude infective or malignant etiologies.

Patients with Chronic Kidney Disease (CKD) are at high risk for pericarditis. The reported incidence varies widely depending on the modalities used for diagnosis. Thus, earlier reports identified pericardial inflammation in autopsy in uremic subjects, while recent studies using echocardiography can identify pericardial effusion even without symptoms of pericarditis. Thus, uremic pericarditis is now used to describe CKD with signs of pericardial inflammation and/or significant pericardial effusion. The exact incidence of pericardial involvement in children with CKD is unknown, but a recent study described that 9% of patients with pericarditis had a renal etiology [1]. In addition to usual etiologies in the non-CKD patient, there are two specific clinical syndromes seen in uremic patients: Uremic pericarditis which develops before or within eight weeks of initiation of dialysis and dialysis associated pericarditis that developed in patients who have been on dialysis for more than eight weeks [2]. The true incidence of uremic pericarditis is difficult to ascertain due to the variability of diagnostic criteria band various studies have reported a prevalence ranging from 2% to 21% [3]. Though the pathophysiology of both is unknown, the patients who are already receiving dialysis appear to behave differently from that are not on dialysis. The former is more likely to present with hemodynamic instability and tamponade, less responsive to solute clearance or intensification of dialysis regime, and more likely to have hemorrhagic effusions. This did not fit our patient’s clinical profile.

We did choose to increase the dialysis frequency even though dialysis-associated pericarditis appeared unlikely because of the stability of her clinical course and excellent compliance with the dialysis schedule.

Uremic and dialysis pericarditis have also been associated with non-compliance, lower flow rates, or episodes of access clotting before developing pericarditis, especially with stress such as major medical or surgical illness.

She appeared to have collected the effusion silently, sometimes following her last echocardiogram. Her chart was then reviewed to look for any clues, especially for medications. She had been prescribed Minoxidil in a very low dose about three months before presentation with a month off in-between. The rest of her medical and dialysis regime was unchanged.

Multiple medications have been implicated in drug-induced pericarditis; however, it continues to be an uncommon presentation of drug toxicity. Historically medications such as procainamide, hydralazine, and isoniazid caused drug induced lupus and associated serositis [4]. More recently, the cardiac toxicity, including pericarditis, of checkpoint inhibitors such as ipilimumab and nivolumab has been recognized [5]. Minoxidil is a direct vasodilator that acts on the adenosine triphosphate-sensitive potassium channels in vascular smooth muscles. Common side effects include hypertrichosis (seen in our patient), tachycardia, and fluid retention, seen with most vasodilators. However, adult studies have shown that 3% of patients receiving Minoxidil develop pericardial effusions requiring discontinuation of the medication [6]. Though pericardial effusions are a well-recognized side effect of minoxidil therapy, case reports are rare and are confined to adult patients [7]. Our literature review did not reveal pericardial effusion documented in a pediatric patient, though this may be because Minoxidil is rarely used except in resistant hypertension. The mechanism by which Minoxidil causes pericardial effusion is not known but in part is thought to be related to the hemodynamic effects of the drug, particularly salt and water retention, and is usually seen at higher doses. Some authors have proposed that echoes should be done in a scheduled fashion every 3 to 6 months, at least during the early phase of minoxidil therapy, since the effusion can collect insidiously. A recent case report described three pediatric patients receiving diazoxide who developed significant pericardial effusions months to years after initiation of therapy [8]. Thus therapeutic agents should be considered in the differential diagnosis in challenging cases, even in the pediatric age group.

Minoxidil was stopped, and she did not re-accumulate the effusion. However, she had drug refractory hypertension; thus, nephrectomy was performed, and a beta-blocker was added to her regime. Her dialysis frequency was changed back to 3 times per week, and she has remained stable without re-accumulating the effusion.

© 2021 Nandini Madan. This is an open access article distributed under the terms of the Creative Commons Attribution 4.0 International License (CC BY-4.0).