Malignancy presenting as polyarthralgia is rare, and correct diagnosis requires complete history, physical examination, imaging, and laboratory workup. We report a case of a 64-year-old male with abrupt severe debilitating migratory polyarthralgia as the initial presenting symptom of invasive ductal carcinoma. His joint pain was refractory to traditional analgesic medications, and his polyarthralgia resolved after surgical excision of his malignancy. Abrupt onset of severe migratory polyarthralgia in the context of constitutional symptoms or significantly elevated inflammatory markers without clear etiology may be a manifestation of an occult malignancy. Early recognition may lead to timely detection and treatment.

Paraneoplastic rheumatic syndromes occur when a malignancy causes unusual-musculoskeletal or vascular manifestations triggered by the presence of its respective tumor entities [1]. Symptoms typical of immune-mediated inflammatory arthritis include morning stiffness, improvement of pain with activity, synovitis, and at least partial response to steroids. On the contrary, paraneoplastic rheumatic syndromes can present with joint pain but lack the typical aforementioned inflammatory features. Additionally, they may concomitantly present with constitutional symptoms and may not respond to treatment for inflammatory pain. In this case, we describe a male patient who presented with sudden onset of profound migratory joint pain that eventually led to an unanticipated diagnosis of male breast cancer at a highly treatable stage. Paraneoplastic rheumatic syndromes are rare, and male breast cancer is uncommon. It is even more unusual for polyarthralgia to be the initial presentation of male breast cancer. We hope to increase the awareness that rheumatic symptoms can represent early signs of occult malignancy, especially when patients do not have typical features of rheumatologic disease.

A 64-year-old African American male veteran presented with four months of asymmetric migratory joint pain that started with swelling of the right elbow and wrist. Over time, the pain migrated to the right knee and ankle and then to the left knee and ankle. The pain was described as severe, non-radiating, stiff, and constant. His pain was alleviated by rest and exacerbated by movement and activity. Other symptoms included significant unintentional weight loss of 30 pounds and decreased appetite. He denied morning stiffness, fever, chills, night sweats, recent infection, or sick contacts. He was initially hospitalized briefly for joint pain and decreased range of motion. His labs were notable for leukocytosis of 13.5 x 109/L, elevated Erythrocyte Sedimentation Rate (ESR) of 91 mm/hr, and elevated C-reactive protein (CRP) of 17.2 mg/dL. His prior ESR and CRP were within the normal range. Rheumatologic serologies such as Rheumatoid Factor (RF) and anti-citrullinated peptide (anti-CCP) were negative. X-rays of bilateral knees and ankles showed degenerative changes and spurring but no erosive changes. Due to the significantly elevated inflammatory markers, there was a concern for infection, malignancy, and sero-negative inflammatory arthritis. CT of the chest, abdomen, and pelvis was unremarkable. The patient was discharged home after pain was partially controlled with hydrocodone and acetaminophen to follow-up with physical therapy and rheumatology. However, his joint pain worsened with difficulty ambulating, which prompted him to return to the hospital. Physical exam revealed upper extremities without tenderness or restricted range of motion, but tenderness and pain on both active and passive range of motion for bilateral knees and ankles. Joints were cool to touch and without effusion or erythema. The physical exam was otherwise unremarkable.

Given the patient’s significantly elevated ESR and CRP, severe pain, substantial weight loss, anemia, and inadequate response to pain regimen, there was still a concern for malignancy despite the previous negative CT findings. Subsequently, a PET scan was performed that showed an FDG avid 8 mm nodule in the upper central left breast, concerning malignancy (Figure 1). 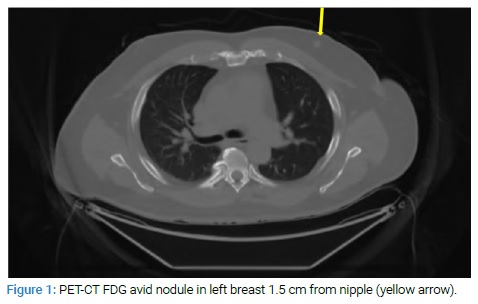 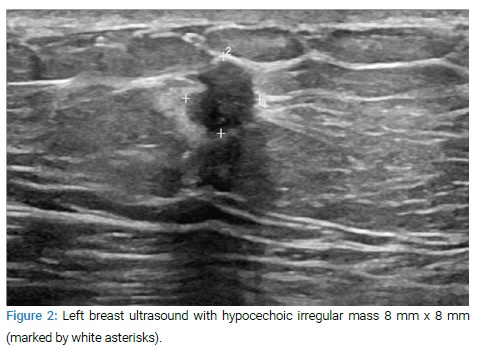 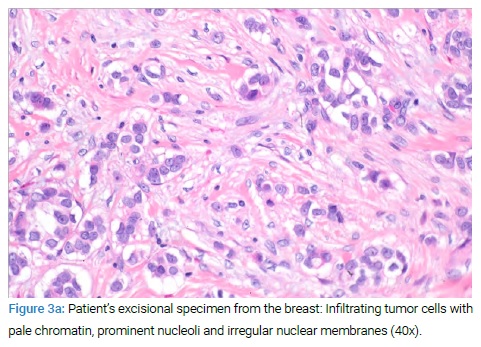 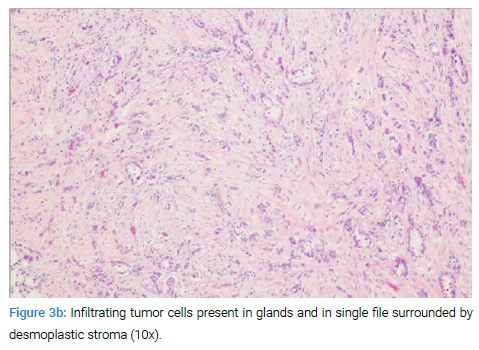 The patient was started on tamoxifen, planned for five years, per oncology recommendation. The patient was seen in the primary clinic a month after mastectomy with significant improvement of joint pain and was to continue home physical therapy due to deconditioning during prolonged hospitalization.

Paraneoplastic Rheumatic Syndromes (PRS) are defined as musculoskeletal symptoms that are not caused directly by tumors or metastasis. The generally accepted mechanism of PRS is that they are induced by malignancy through hormones, peptides, autocrine and paracrine mediators, antibodies, and cytotoxic lymphocytes. These circulating mediators produced by tumor cells may damage vascular endothelial cells, synovial epithelial, and mesenchymal tissues, resulting in rheumatic-like symptoms [1,4]. have has been described in many different cancers, including lung cancer, leukemia, ovarian cancer, gastric carcinoma, pancreatic cancer, and many more. Symptoms typically include those that mimic arthropathies, connective tissue diseases, bone disorders, and vasculitis [5].

PRS is different from rheumatic diseases that are known to have an increased risk of associated secondary malignancies, such as rheumatoid arthritis, Sjogren’s syndrome, inflammatory myositis, or primary soft tissue and bone cancer with articular involvement, especially in terms of the temporal relationship with neoplasm. PRS tends to run its course in parallel with the underlying malignancy [6]. Most of the time, PRS precedes the diagnosis of cancer, although it can coincide with and follow the diagnosis of cancer. In two retrospective studies, PRS preceded the diagnosis of malignancies in all of the patients they reviewed, and the delayed onset of neoplasms ranged anywhere from two months to 24 months [7,8]. Another study analyzed a total of 21 patients. Out of the 21 patients, 19 were diagnosed with malignancy after joint pain, one before the onset of joint pain, and one simultaneously [9]. These studies support the notion that PRS can serve as a predictive factor for the development of occult neoplasm.

Arthralgia is the most common clinical manifestation of PRS, followed by lymph node enlargement, skin rash, weight loss, fever, chills, fatigue, and muscle soreness. In addition to these features, others have reported patients with edematous polysynovitis, leukocytosis, and anemia [10]. In one case report, fever and severe polyarthralgia were the initial symptoms for a patient with recurrent disseminated invasive ductal carcinoma. While fever is commonly seen with occult neoplasm, it is rarely seen in patients with non-inflammatory polyarthralgia such as osteoarthritis [11]. The concomitant sudden onset of atypical joint pain and constitutional symptoms such as fever or unintentional weight loss should warrant further investigation for the possibility of an occult malignancy. Several studies have reported the key features of arthralgia and arthritis secondary to primary occult neoplasm. Key features are summarized in (Table 1). 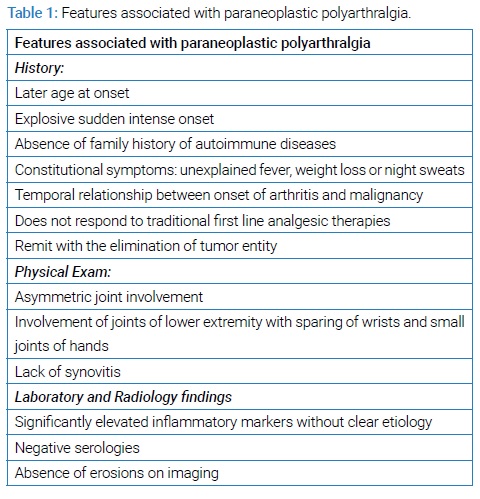 Despite some common features, the clinical presentation of PRS can still be variable and may still be difficult to distinguish from primary rheumatologic diseases. Swelling of MCP and PIP and morning stiffness have been observed as cases of paraneoplastic arthritis, and several others have noted seropositivity for RF, ANA, and even anti-CCP [10,12,13]. These features can be confusing and further challenge the clinicians to differentiate PRS from other primary rheumatologic diseases. However, one consistent finding from the various case reports of PRS is that they typically do not resolve with traditional analgesic agents but rather remit or improve rapidly after treatment of malignancy [12].
PRS is a diagnosis of exclusion. In addition to a detailed evaluation for a primary rheumatologic etiology causing arthralgia and fatigue, we also must consider other etiologies. Infections such as Lyme disease, Parvovirus B19, and Neisseria gonorrhoeae present acute polyarticular pain [14]. Serum sickness reactions are recognized causes of acute, self-limited polyarthritis [15]. Careful history taking for exposures and risk factors, physical examination for skin lesions or rashes in addition to the joint exam. Moreover, if present, joint aspiration of effusions, in conjunction with lab testing and imaging, is helping to make the correct diagnosis.
One of the better-characterized classes of paraneoplastic syndromes is Paraneoplastic Neurological Disorders (PNDs). Several reports suggest that PNDs are associated with identifying tumors at early stages and have a favorable cancer outcome in terms of better survival and treatment response than those with identical tumors without PNDs [16,17]. Unfortunately, such data is currently lacking and not conclusive for PRS. Therefore, further research and data collection to address this would be valuable, although challenges may be met due to the rarity of PRS.
Not only can PRS be indicative of malignancy, but it can also significantly negatively impact the patient’s quality of life, such as in the case of this patient. Therefore, while it is not recommended to conduct extensive evaluations for malignancy in all patients with joint pain, awareness of the existence and features of PRS are important for clinicians. This knowledge allows for expanded differential diagnosis when a patient presents with joint pain.

© 2021 Reddy SB. This is an open access article distributed under the terms of the Creative Commons Attribution 4.0 International License (CC BY-4.0).