Endoscopic reduction in pediatric cases of acute Gastric Volvulus (GV) is rarely reported, especially cases of GV associated with Beckwith-Wiedemann Syndrome (BWS), which is a condition with congenital malformation. A 4-year-old girl with BWS presented to the emergency room with a complaint of abdominal pain while eating lunch. Physical examination revealed abdominal distension and severe tenderness but no peritoneal signs. A chest x-ray taken three months ago when she presented to the emergency room with complaints of fever showed mild left diaphragmatic eventration. Her parents indicated that she sometimes complains of abdominal pain. Contrast-enhanced computed tomography revealed mesenteroaxial GV without necrosis, perforation of the gastric wall, and a complicated malformation requiring immediate surgical repair; hence, an endoscopic reduction was performed. After the endoscopic reduction, her symptoms resolved. Since the diaphragmatic eventration was not severe enough to require plication, there was an option for a follow-up observation and a surgical treatment to be performed if the GV recurred in the future. However, based on the patient’s history of repeated abdominal pain, there was concern about the possibility of GV recurrence. Therefore, we performed laparoscopic anterior gastropexy on the second day after the endoscopic reduction. The patient’s postoperative course was uneventful, and she was discharged on the third postoperative day. We report a pediatric case of acute gastric volvulus that was amenable to endoscopic reduction, which relieved abdominal pain and delayed surgical intervention. Endoscopic reduction followed by delayed laparoscopic gastropexy is an acceptable treatment option in pediatric GV cases without anatomical abnormalities that require immediate surgical repair.

Gastric volvulus (GV) in children is a rare condition in which the stomach rotates more than 180° around its axis, causing gastric outlet obstruction, which can lead to ischemia, necrosis, or perforation of the stomach, and can be fatal if diagnosis and treatment are delayed [1]. Approximately 70% of acute GV cases in children involve anatomical abnormalities of the diaphragm or spleen, with 25% resulting in diaphragmatic eventration [2,3]. The three recommended treatments for acute GV are open surgery, laparoscopic surgery, and endoscopic reduction [3]. Although descriptions of successful endoscopic reduction of GV in adults have been reported, few have involved children [4,5]. Herein, we report a pediatric case of acute gastric volvulus that was amenable to endoscopic reduction, which relieved the patient’s abdominal pain and was followed by laparoscopic gastropexy.

A 4-year-old girl presented to the emergency room with complaints of abdominal pain while eating lunch. At birth, she had umbilical cord hernia, macroglossia, and bilateral ear creases and was diagnosed with Beckwith-Wiedemann Syndrome (BWS). A chest X-ray was taken three months ago when the patient presented to the emergency room with complaints of fever. The Chest X-ray showed left diaphragmatic elevation, suggestive of diaphragmatic eventration (Figure 1). The patient sometimes complains of abdominal pain, as indicated by her parents. Physical examination in the emergency room revealed abdominal distension and severe tenderness but no peritoneal signs. The plain abdominal radiograph showed a giant bubble in the upper abdomen; thus, a nasogastric tube was inserted (Figure 2A). The blood tests revealed a white blood cell count of 20,100/μL, creatine kinase value of 205 U/L, and C-reactive protein level of 1.10 mg/dL without other abnormalities. Contrast-enhanced computed tomography (CT) indicated that the stomach, located below the left diaphragm, had a large content, forcing the cephalad margins from the esophagogastric junction, leading to a diagnosis of mesenteroaxial GV with a 180° clockwise rotation (Figure 2B). The gastric wall was well contrasted, and there was no indication of necrosis or perforation. The abdominal distension and pain were slightly relieved but not entirely resolved. In addition, the patient had repeated episodes of unproductive retching. Therefore, an endoscopic reduction was then performed. 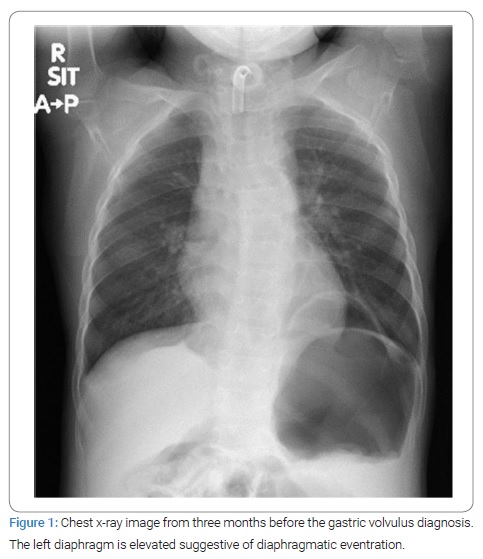 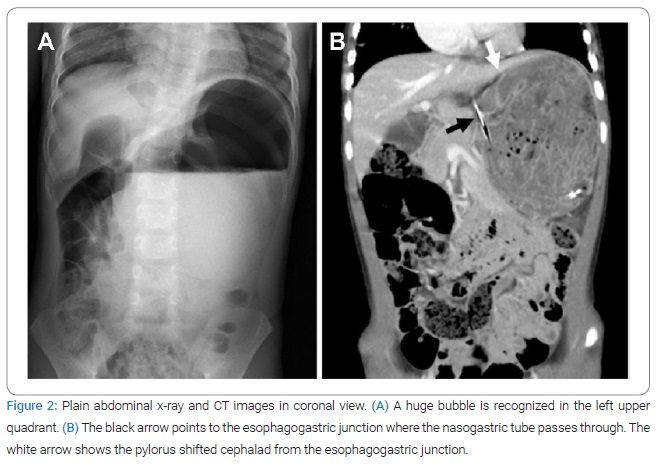 Endoscopic reduction for GV: Intravenous benzodiazepines were administered for sedation during the endoscopic procedure, according to the patient’s weight. The endoscopy demonstrated no signs of ischemia or necrosis (Figure 3A). By using gentle insufflation and careful manipulation of the endoscope to prevent perforation, we revealed the reverse α-shape view through fluoroscopy (Figure 4A). The endoscopist performed a clockwise rotation with a gentle right torque maneuver to reverse the clockwise, rotated mesenterial GV. The endoscope was passed into the duodenum, and the volvulus was reduced successfully (Figure 4B). The endoscopic findings after the reduction revealed a pyloric ring from the stomach lumen (Figure 3B). 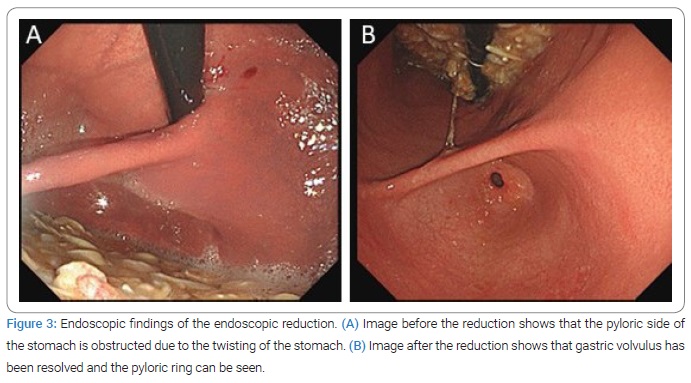 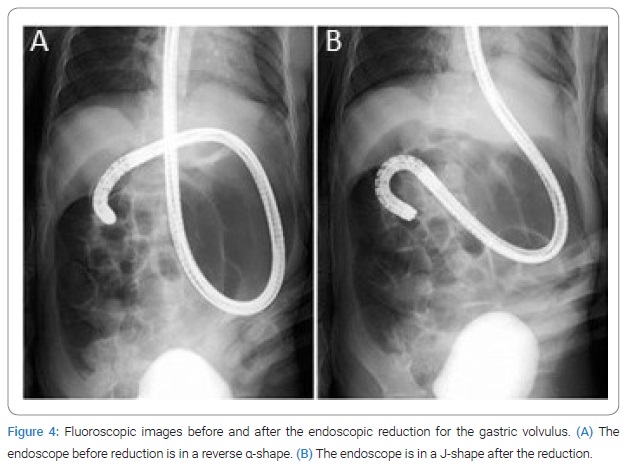 After endoscopic reduction, the patient’s unproductive retching and abdominal pain resolved. Since the diaphragmatic eventration was not severe enough to require diaphragmatic plication, there was an option to do a follow-up observation for a while and then perform a surgical treatment if the GV recurred in the future. However, based on the patient’s history of repeated abdominal pain, GV recurrence was possible. Consequently, we performed a laparoscopic anterior gastropexy on the second day after the endoscopic reduction. The postoperative course was uneventful, and the patient was discharged on postoperative day three.

Gastric volvulus can cause gastric ischemia, necrosis, and perforation, and may lead to life-threatening consequences if the diagnosis and treatment are delayed. It is crucial to suspect this disease based on the symptoms and physical examination for prompt diagnosis. Contrary to adult GV, which is characterized by unproductive retching, the most common symptom of acute GV in children was reported to be nonbilious emesis (69%–75%), followed by abdominal distention (44%–47%), and abdominal pain (34%–47%) [2,3]. According to anatomical factors, GV is divided into primary and secondary causes, and 76% of the causes of pediatric GV are secondary [3]. Primary GV is caused by the absence, failure of attachment, or elongation of gastric fixation, and is more common in chronic GV. Secondary GV is due to disorders of gastric anatomy, function, or abnormalities of adjacent organs, which is common in acute GV [2]. In order of frequency, congenital diaphragmatic hernia, diaphragmatic eventration, paraesophageal hernia, intestinal malrotation, wandering spleen, asplenism, and hiatal hernia have been reported as anatomical abnormalities associated with acute GV in children [2,3]. The present case had no severe anatomical abnormality, but her chest radiograph showed mild diaphragmatic eventration, which may have caused the secondary GV.

The gold standard for diagnostic imaging of GV is the upper gastrointestinal series and plain radiography [3,6,7]. However, recent reports have shown that the sensitivity and specificity of CT in the diagnosis of GV are 80% and 100%, respectively, indicating a sufficiently accurate diagnostic method [8,9]. For example, in organoaxial GV, the inverted stomach is located horizontally and the greater curvature is cephalad to the lesser curvature on CT imaging. In mesenteroaxial GV, the stomach is positioned vertically, and the pylorus is located cephalad to the esophagogastric junction, as seen in the present case [9]. In pediatric GV cases, a CT scan can also be useful for evaluating associated anomalies [10–12]. Additionally, a contrast-enhanced CT scan can provide more accurate identification of the type of volvulus, edema, ischemia, and necrosis of the gastric wall than a non-contrast CT scan, which may help determine the feasibility of non-surgical treatment, such as endoscopic reduction [9].

In our institution, we initially perform endoscopic reduction for acute GV in adults with no evidence of perforation or necrosis on contrast-enhanced CT, and then schedule laparoscopic gastropexy for patients who can tolerate the procedure. Therefore, the endoscopic reduction was performed first in this case as well. Since there are only a few reports on endoscopic reduction of GV in children, further investigations are needed to determine its efficacy and validity.

The authors would like to thank the pediatricians, Dr. Toshifumi Yodoshi, and Dr. Soya Kobayashi at Okinawa Chubu Hospital for their support in the treatment of this patient.

© 2021 Masafumi Ie. This is an open access article distributed under the terms of the Creative Commons Attribution 4.0 International License (CC BY-4.0).