Background: Minocin is an antibiotic used in the treatment of adolescent acne.

Overall, Minocin is considered safe and effective with proper usage.

As its use has increased, more severe reactions have been identified, including anaphylaxis, lupus-like syndrome, hypersensitivity syndrome reaction (DRESS syndrome), and hepatitis.

In this paper, we present the case of a 17-year-old Jewish female who presented with fever, pharyngeal pain, rash, and elevated transaminases; her medical history was unremarkable except for acne vulgaris that was treated with Minocin.

Although not specific for Drug Rash with Eosinophilia and Systemic Symptoms (DRESS syndrome), a skin biopsy revealed microscopic findings, treatment with steroids was initiated. However, due to severe deterioration in liver functions, the patient was sent to the Intensive Care Unit (ICU) unit in a tertiary hospital due to impending fulminant hepatitis.

Suggested prevalence of DRESS syndrome is around 10 cases per 1,000,000 inpatients, median onset time (IQR) is known to be 16 (9–27) days as the most common causative agents are phenytoin (23.1%), nevirapine (17.3%), allopurinol (15.4%), and clotrimoxazole (13.5%). Its mechanism proved to be a delayed-type IV b hypersensitivity reaction mediated by antiviral T cells.

DRESS syndrome is not very common; however, it should not be overlooked since it might be potentially life-threatening.

A 17-year-old Jewish female presented in our department with fever, pharyngeal pain, rash, and elevated liver transaminases (Figure 1). She was generally healthy and had started four weeks earlier minocycline for acne vulgaris, yet the treatment was discontinued ten days before admission. 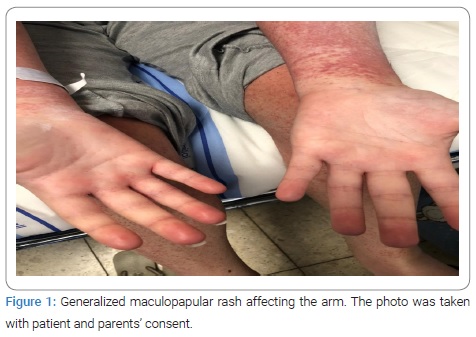 The patient reported losing 8 kilograms of her body weight recently due to losing appetite and some pharyngeal pain. In addition, she was feverish the last few days before presentation, with a fever up to 39.5°C.

On the third day of admission, the patient started with a fever up to 39°C, the rash spread and became confluent, edema extended to involve the entire body except for palms and soles. CBC revealed remarkable eosinophilia up to 1500 cells for microliter. Atypical lymphocytosis was noticed on the smear. Aspartate Aminotransferase (AST) and Alanine Aminotransferase (ALT) levels increased up to 150 mg/dL and 270 mg/dL respectively (10 U/L–40 U/L) and LDH rose up to 1000 U/L (80 U/L–225 U/L).

Based on the patient’s history and the peculiar clinical picture, DRESS syndrome was diagnosed, and systemic treatment with oral prednisone at the dose of 1 mg/kg body weight was initiated. On day 5 of the treatment patient developed fever again, eosinophils increased up to 2300 cells for microliter, and liver function tests rose to 1400 mg/dL for AST, 1200 mg/dL (10 U/L–40 U/L) for ALT, and 3600 mg/dL(80 U/L–225 U/L) for LDH respectively. 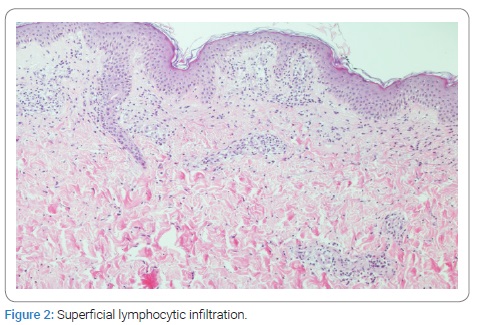 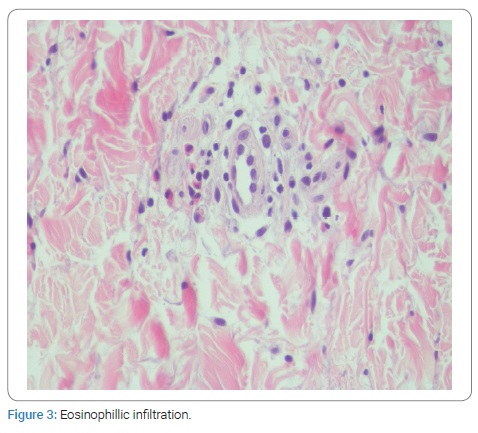 Under a higher dose (1.5 mg/kg body weight) of systemic steroids given intravenously, the patient’s condition gradually improved, liver function tests dropped to almost normal, and the rash improved impressively. A few days later, the patient was released in a good general condition with a steroid tapering schedule and under close follow-up.

In this case, we report the possible severe liver injury and potentially life-threatening outcome of DRESS syndrome induced by minocycline given to treat adolescent acne.

Our patient presented with flu-like symptoms suggesting viral infection. On admission, she denied taking any drugs; there were no infectious disease contacts and no prior history of hepatitis, as well as no family history of liver disease or drug reactions.

The negative results of the extensive laboratory workup for common infectious and autoimmune diseases and the ongoing deterioration in liver function excluded those etiologies and suggested another culprit.

After repeated questioning of the patient and her relatives, the exposure to minocycline became evident, and its role as an etiological agent was suspected.

A major problem in establishing the diagnosis of DRESS syndrome is the lack of specific confirmation tests. The diagnosis is based on clinicians’ judgment and the usage of scoring systems, such as “register,” first proposed by Bouquet in 1996. Diagnostic criteria include the simultaneous presence of three conditions: drug-induced skin eruption, eosinophilia > 1,500/L, and at least one of the following systemic signs: enlarged lymph nodes, hepatitis (transaminases > 2N), interstitial nephropathy, interstitial lung disease, and myocardial involvement [1,2].

Our patient had at least 5 points on RegiSCAR (fever, rash, lymph node enlargement, elevated transaminases, eosinophilia, and lung involvement), which made the diagnosis “probable/definite” [3].

Most reports in the literature describe cases of mild hepatitis, but acute liver failure resulting in death or liver transplantation can also occur, such as in our case [4–6].

Even though the cases of DRESS presenting with severe acute hepatitis (defined as ALT levels 10 × ULN and/or acute liver failure, i.e., coagulopathy and/or encephalopathy) reported in the literature are scarce, they seem to be more frequent in women between the second and fourth decade of life [7–9].

In our view, this is an educational case, and we would like to emphasize the importance of good history taking and family members questioning when clinical presentation with abrupt and severe illness is evident and certain etiology is unclear.

The second massage for physicians and especially those who frequently use minocycline for acne treatment should be aware of the possibility of DRESS syndrome as it can mimic other pathologies and can be potentially life-threatening. Therefore, prompt withdrawal of the drug is crucial for patient’s management and avoiding re-exposure to drugs known to cause the syndrome is essential.

Drug Rash with Eosinophilia and Systemic Symptoms syndrome is not very common yet should always be included in the differential diagnosis of acute fever syndrome, especially when a history of suspicious drug intake and blood eosinophilia is present, and other causes are excluded.

Minocycline is frequently used to treat adolescents and might cause severe hepatitis as part of DRESS syndrome. Therefore, physicians should be aware of this potentially serious reaction and stop the drug immediately when suspicion is raised.

© 2022 Mahmoud Nujeidat. This is an open access article distributed under the terms of the Creative Commons Attribution 4.0 International License (CC BY-4.0).