Background: Cardia-preserving proximal gastrectomy (CPPG) is a function preserving surgery for treating early gastric cancer (EGC) of the upper stomach, which aims to reduce the incidence of complications and improve the quality of life after surgery. The clinical outcomes and quality of life (QOL) of CPPG were evaluated.

Results: Operative time of CPPG and PG was 189 and 177 minutes, respectively (P = 0.023). There was no difference in terms of blood loss, hospital stay, complication rate, and 5-year survival rate. CPPG has a similar QOL, and lower incidence of gastroesophageal reflux (GER) compared to PG.

Conclusion: CPPG is a feasible surgical procedure for EGC of the upper third stomach. CPPG has favorable surgical outcomes and is superior to PG in terms of GER. However, QOL of CPPG and PG were not different. Therefore, to improve the QOL of CPPG, we need to improve other factors except for GER.

With the increase in gastric incidence and mortality of gastric cancer worldwide, many countries have launched health checkups, and the proportion of early gastric cancer (EGC) has been increasing. EGC accounts for more than 70% of all gastric cancers and has an increased five-year survival rate of more than 90%. Therefore, the treatment of EGC, including eradicating the tumor, reducing trauma, and improving patients’ quality of life (QOL), has become a focus of research. Originally, total gastrectomy (TG) was performed for the EGC of the upper third of the stomach. Poor QOL of patients after TG make surgeons carry out function preserving gastrectomies such as proximal gastrectomy (PG) or jejunal interposition (JI). However, PG is notorious for severe gastroesophageal reflux (GER), and JI is a complicated surgical procedure making several additional bowel anastomoses. Cardia-preserving proximal gastrectomy (CPPG) can overcome the weak points of TG or JI. CPPG preserves cardio, reduces GER, and avoids additional jejunal resection and anastomosis. It is performed not only to cure the tumor but also to consider the patient’s postoperative QOL. However, its clinical feasibility, such as short-term surgical results, long-term oncologic results, and patients’ QOL, is not investigated yet. Therefore, we wanted to compare the clinical outcomes of CPPG as the standard treatment of EGC in the upper third of the stomach with the classical PG.

Data analysis: A retrospective comparative analysis of CPPG and PG from October 2006 to July 2019 was performed. SPSS13.0 statistical software was used for statistical analysis. The χ2 test evaluated categorical data, and the t-test evaluated continuous data.

Patient’s selection: The selection criteria were as follows;

The surgical procedure of CPPG: To preserve the right gastroepiploic artery, we checked the sixth lymph node with fingers without en-bloc dissection. A frozen biopsy confirmed it. Next, the 12th lymph nodes were dissected, and the lesser curvature and the third lymph nodes were dissected from the origin of the right gastric artery to the esophagus. Then, the metastasis was confirmed with a frozen biopsy of selectively dissected lymph nodes to preserve the right gastric vessels for the fifth lymph nodes with the same method as the sixth lymph nodes. Dissection of the abdominal esophagus is avoided to prevent phrenoesophageal ligament (PEL) damage on the diaphragm, and the palpated first and second lymph nodes were excised. After confirming that the metastasis was not discovered through a frozen biopsy, excision was performed about 1.5 cm–2 cm from EGJ, and securing the proximal free resection margin was confirmed through a frozen biopsy. Finally, the anastomosis of the remaining stomach with layers, mucosa-submucosa, and sero-muscular suture, was performed. The pyloroplasty was not performed, and the nasogastric tube was not inserted. The oral intake started from the fourth day after the surgery (Figure 1). 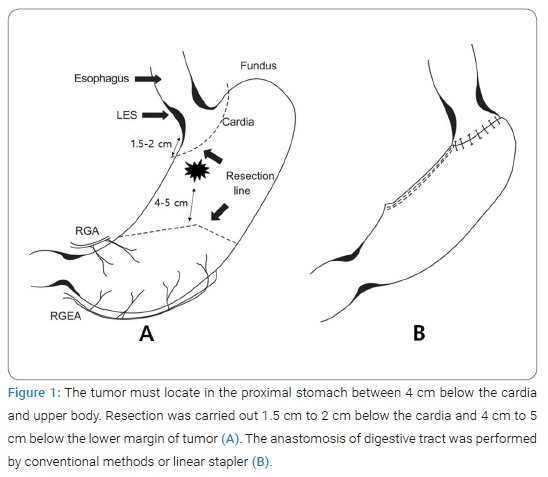 Feasibility of CPPG: Operative time, blood loss, complications, and five-year survival rate were compared. Among 45 questions of Postgastrectomy Syndrome Assessment Scale-45 (PGSAS-45), 29 questions were selected, and a QOL survey was carried out 12 months after surgery. Originally, PGSAS-45 was invented for the patients to select five to seven-point Likert scale according to the items. However, many patients could not select the point because some items had no clear definition of the point. Therefore, we modified the scale using a more precise definition as follows; 0 = none, 1 = mild, not require medication, 2 = moderate, relieved by medication, 3 = severe, not relieved by medication. In addition, for the subdomain of satisfaction and dissatisfaction, we used a 5-point scale; 1 = strongly disagree, 2 = disagree, 3 = do not know, 4 = agree, 5 = strongly agree.

General characteristics of the patients: A total of 35 patients were enrolled. CPPG was carried out for 21 patients and PG for 14 patients. They were all treated for the first time. Gastroscopy and pathological confirmation were performed before the surgery. There was not a significant difference between the two groups (Table 1). 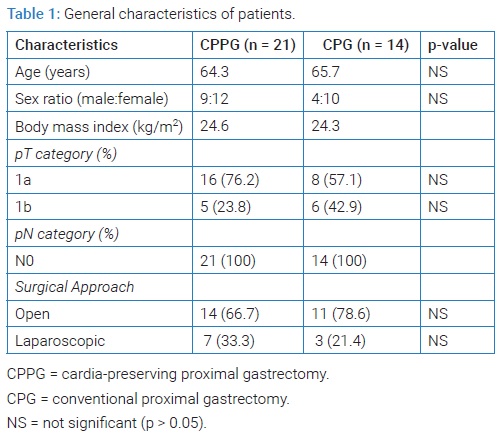 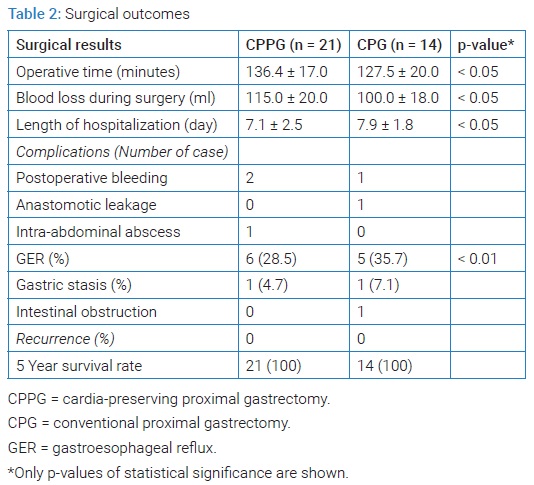 Outcomes of QOL: QOL in CPPG was not superior to PG except for acid reflux, bloating, and bile reflux. There was no difference in overall QOL between the two groups (Table 3,Table 4). 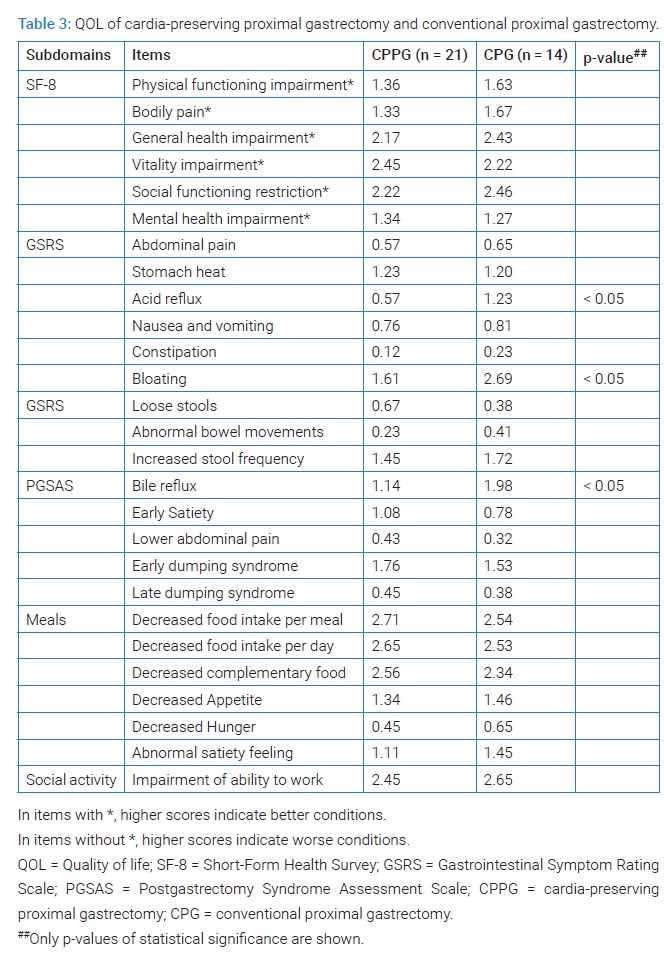 Classically, TG was performed for EGC of the upper third stomach. However, TG lost all the stomach function, resulting in poor QOL and nutritional status. PG was developed to preserve gastric function and overcome the disadvantage of TG. Despite the issue of limited lymph node dissection, PG with regional lymph node dissection had positive effects on maintaining body weight and preventing post-gastrectomy anemia [1]. The 5-year survival rate of EGC is higher than 90%, and QOL became the main focus for the patient who took gastrectomy for EGC. Despite the original intention of preserving function, PG showed a high incidence of GER and poor QOL [2]. Several surgical techniques, such as the double flap technique or jejunal interposition, were developed to reduce reflux [3,4]. However, these techniques need additional surgery and bowel anastomosis. (endoscopic mucosal resection) EMR and (endoscopic submucosal dissection) ESD are also one of the treatment methods, but the biggest difference lies in the size of the lesions and the depth of infiltration that the two methods can remove. EMR limits the size of lesions resected in one piece and can only resect mucosal layer lesions, while ESD has no size limitation and can resect SM1 layer lesions. Compared with EMR, ESD treatment of early gastric cancer has a higher en-bloc resection rate and complete resection rate, lower local recurrence rate, but a higher incidence of complications such as perforation. Endoscopic treatment is an integral part of the multidisciplinary treatment of gastric cancer. Recommendations should be carried out in large hospitals with surgical referral capabilities, endoscopists should be professionally trained, and multidisciplinary collaboration should be required. CPPG is a relatively new surgical modification of PG, which preserves cardia and phrenoesophageal ligament, which are the most important anatomic structures to prevent GER. This technique does not make additional bowel resection contrary to previous surgical techniques.

CPPG showed a longer operative time compared to PG. This is because we separated No. 1,2,5,6 lymph nodes and performed a frozen biopsy before excision of the stomach. Function preserving should not place above the surgical radicality. Frozen biopsy of the regional lymph node is troublesome and time-consuming, but by now, there is no reliable indicator of lymph node metastasis but frozen biopsy. Two-dimensional values measured using preoperative multi-detector computed tomography or peak-standardized uptake value by preoperative positron emission tomography-computed tomography (PET-CT) can help to reduce the operative time for detecting lymph node metastasis [5,6].

CPPG helped to reduce acid or bile reflux. However, this advantage failed to promote patients’ overall QOL. Multiple factors decide QOL. We think that mild to moderate GER symptom can be controlled by medication and does not impact overall QOL. Robertson et al. showed similar results. They assessed the GER symptoms and QOL following laparoscopic sleeve gastrectomy. A small portion of patients had troublesome GER in their study, but overall satisfaction was high [9]. Nutritional status, the strength of skeletal muscle, weight gaining, or symptoms after chemotherapy that are not well controlled by medication seems to have a stronger impact on QOL than reflux [10,11].

PG has an issue of surgical radicality. Contrary to TG, PG is limited to carrying out standard D2 lymph node dissection. However, if we select patients cautiously, surgical radicality does not matter. Nai et al. investigated the survival rate of PG and TG for esophagogastric junction (EGJ) adenocarcinoma (Siewert II types). They reported that the overall 3-year survival rate in the proximal gastrectomy and total gastrectomy group was 65.6% and 62.6%, respectively, and the overall 5-year survival rate was 53.8% and 44.5%, respectively. No significant difference was found between the two groups [12]. PU et al. made a meta-analysis comparing PG and TG about long-term survival and complications. They showed that 5-year survival rate was similar, but PG had a higher recurrence rate and anastomotic stenosis rate [13]. By now, PG is not inferior to TG for a 5-year survival rate. Because CPPG needs to retain the nerve and blood supply of the cardia, the dissection of corresponding regional lymph nodes is greatly affected. This is the main debate about the radicality of CPPG. In our study, the 5-year survival rate of CPPG was not different from PG. CPPG has similar surgical radicality but is superior in some aspects compared to PG. We suggest CPPG as a standard surgical procedure for upper third EGC rather than TG.

Because the study was retrospective in design and we did not control the degree of gastrectomy, there was a significant difference in the size of the residual stomach. To evaluate the GER or other postoperative complications, we needed to measure the residual volume of the stomach after CPPG. Namikawa reported that a larger proximal residual stomach resulted in less weight loss and dissatisfaction with meals and daily life. To evaluate the true impact of CPPG on QOL, we need to measure the metric of the remnant stomach [14]. PG is being tried for advanced gastric cancer of the upper stomach. We need to evaluate the clinical feasibility of CPPG for advanced gastric cancer [15,16].

CPPG has similar short-term and long-term surgical outcomes. CPPG has the advantage of reducing GER and hospital stay and seems to be used to substitute PG in EGC of upper third gastric cancer. GER has no impact on the QOL of CPPG. To improve the QOL of CPPG, we need to improve other factors except for GER.

© 2021 Seong Pyo Mun. This is an open access article distributed under the terms of the Creative Commons Attribution 4.0 International License (CC BY-4.0).