Background: Neurological complications after Radiotherapy of Nasopharyngeal Carcinoma (NPC) are frequent. The most frequent physiopathological effect is the structural change of the vasculature. According to the specific topography of irradiation and the dose, the artery can suffer from this treatment. This study aims to describe an uncommon acute neurovascular complication after Radiotherapy of nasopharyngeal carcinoma. However, it is difficult most of the time to establish a correlation between Radiotherapy and neurovascular manifestations.

Observation: A 34-year-old man with a history of nasopharyngeal carcinoma treated by Radiotherapy presented brutal speech disorders followed by daily paroxysm bilateral decrease of visual acuity. The neurological examination showed dysarthria. The diagnosis of ischemic stroke was held in front of the sudden onset. Cerebral MRI and angiography showed occlusion of the internal carotid artery and multiple ischemic lacunae. Angio MRI showed total occlusion of the internal carotid artery. The diagnostic of toxic angiopathy was held according to the history and the specific finding on neuroimaging. He was treated with double platelet anti aggregate and corticotherapy. The site of the arterial lesions corresponded to that of irradiation. Other carotid segments, and particularly the bifurcations of the common carotid arteries, appeared normal on angiograms. The outcome was good over treatment with no recurrence of episodes of the decease of visual acuity. The endarterectomy was not indicated.

Conclusion: It should be kept in mind that neurovascular complications can appear late after RT, and patients have an increased risk of developing carotid stenosis and should be screened after treatment. The hypothesis of a possible role of Radiotherapy to provoke ischemic events due to structural change of the endothelium can be admitted.

Cranial radiation can impact the cerebral vasculature in many ways, with a wide range of clinical manifestations. However, the incidence of these late effects, including cerebrovascular accidents (CVAs), lacunar lesions, vascular occlusive disease including moyamoya syndrome, vascular malformations, and hemorrhage, is not well known. Because nasopharyngeal carcinoma is highly radiosensitive, radiotherapy is an effective treatment [1]. However, RT contributes to atherosclerosis of the irradiated vessels and increases the risk of vascular stenosis, which may lead to Transient Ischemic Attacks (TIA) or ischemic stroke [2].

A 34-year-old man with a history of nasopharyngeal carcinoma treated with radiotherapy in 2007, without any cardiovascular risk factors, presented 17 March 2019 brutal speech disorders and daily paroxysm decrease of visual acuity during a few hours less than 24 hours, usually after effort. The neurological examination one week after the symptoms objected dysarthria. Cerebral MRI showed occlusion of the left internal carotid artery from cervical portion C1 to communicating portion C7, multiple ischemic lacunae lateralized to the left at the level of corona radiata, external capsule, cause core body (Figure1,Figure 2). The diagnosis of ischemic stroke was held in front of the sudden onset of the speech disorder associated with a transient ischemic retinal accident for the visual deficit. Paraclinical explorations (cardiac echocardiography, angiography of the supra-aortic trunk, Thoracic CT with Contrast Injection) the dosage of protein S, C, ATIII, Homocysteine, Leiden Factor V, and MTHFR mutation was normal. The patient was treated with double platelet anti-aggregant, Aspirin 250 mg, Plavix 75 mg for three weeks. We also prescribe oral prednisolone 30 mg/j for one month with progressive degression. The patient responded well to the treatment with no recurrence of episodes of decrease of visual acuity. 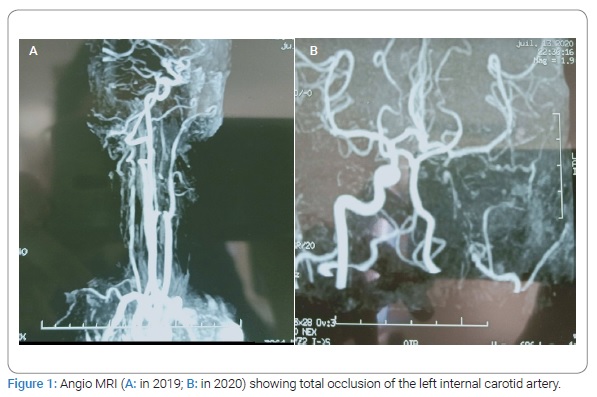 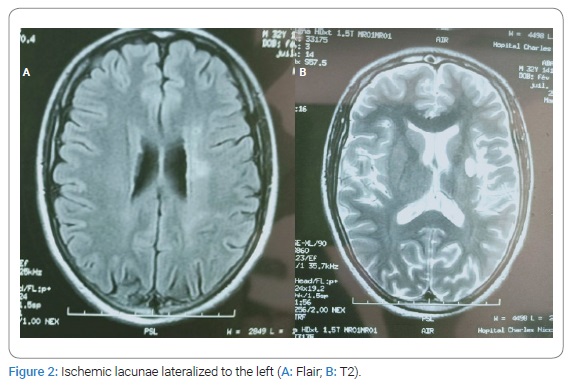 The late vascular complications of cervical irradiation include increased risk of ischemic stroke, transient ischemic attack, carotid stenosis, and general carotid injury post cervical irradiation [3]. In our patient, the neurological manifestations appeared 12 years after radiotherapy. Studies have demonstrated a 5-fold increase in ischemic stroke post cervical irradiation at five years in cancer survivors [3]. The pathophysiology is complex and dependent on the targeted blood vessels and upregulation of pro-inflammatory and hypoxia-related genes. The risk factors for cerebrovascular accidents in adults are similar to those for patients not exposed to cranial radiotherapy [3]. Radiation-induced carotid stenosis involves arterial wall thickening and plaque, which are histologically similar to spontaneous atherosclerosis (Figure 3). However, carotid stenosis is more likely to occur in the irradiated area and can develop in patients without atherosclerosis risk factors [4,5]. According to his biology, our patient has no risk factors before the irradiation. The carotid stenosis corresponded to the site of the radiotherapy. Radiation-induced vascular injury is a complex process and involves both arterial and capillary damage, with veins being less sensitive to radiotherapy [6,7]. Radiation therapy has increased the long-term survival of NPC patients but may also cause carotid stenosis, increasing NPC survivors’ risk of TIA and stroke [8]. Since different blood vessels may be exposed to different radiation levels during treatment, reports on the prevalence of stenosis could vary depending on which arteries were studied [9]. 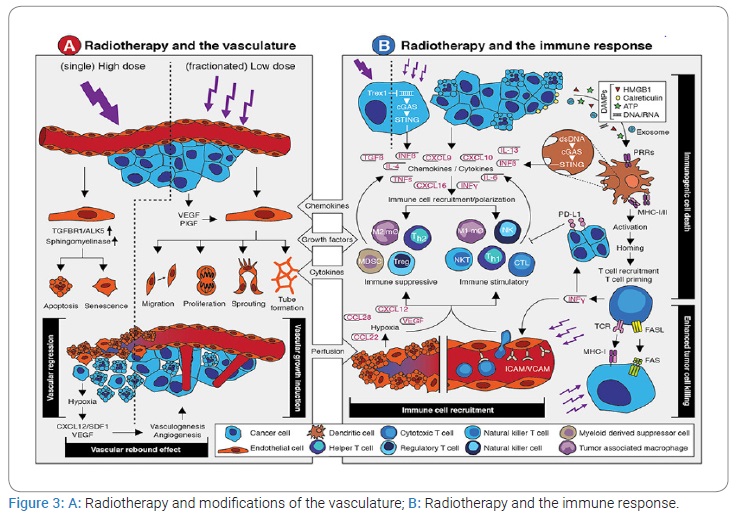 Ten studies had sufficient data for analysis of significant (> 50%) stenosis, with 1678 total patients [10–18]. In our case, it was total carotid stenosis. Different radiotherapy techniques can cause different carotid stenosis risks [19]. Radiation therapy can be a mixed blessing for NPC patients since it treats their tumors but can bring long-term complications like radiation encephalopathy, radiation-induced lower cranial neuropathy, optic neuropathy, brachial plexus injury, cervicular vascular injury, and so on [20]. The exact mechanism for radiation-induced carotid stenosis is not clear [21].

Injury to microvasculature may be the main cause of damage in the large arteries. Endothelial cells in the intima layer and vasa vasorum are considered the most radiation-sensitive cell type in the carotid artery [22,23] (Figure 3A). Radiation can not only trigger inflammatory responses but can also initiate proliferation, migration, and differentiation of smooth muscle cells [24,25] (Figure 3B). Collagen overproduction and extracellular matrix remodeling caused by the radiation eventually lead to the thickening and stiffening of the artery [26]. Lacunar lesions represent ischemic infarcts of restricted size in the deep parenchyma of the brain. Small vessels develop inflammation, increased permeability, and thrombosis, which lead to capillary loss and ischemic necrosis in surrounding neural tissues. In addition to inflammation, non-inflammatory, mineralizing micro-angiopathy and lumen occlusion of small vessels are observed in the autopsy specimen from pediatric patients treated for leukemia [27]. In our patient, we found multiple ischemic lacunae on the cerebral imaging.

Clinical studies have shown previously that antiplatelet therapy has effectively reduced the incidence of a cerebrovascular accident after radiotherapy [28]. Our patient was treated with double platelet anti aggregate after the vascular event. On the other hand, further investigations have demonstrated that surgical Carotid Endarterectomy (CEA) is more effective than antiplatelet therapy in reducing the incidence of Ischemic Stroke (IS) or death in patients with symptomatic (defined as IS, TIA, or retinal TIA) severe (defined as ≥ 70% to 99% of stenosis) carotid artery stenoses [29]. The endarterectomy was not indicated for our patient because of the late stage. Accordingly, CEA is the first established gold standard treatment of symptomatic CAS [30]. However, CEA is not suitable for patients who have received radiotherapy, which usually causes fibrosis and deformity over the skin and muscle layers of the neck area [31]. That is why the endarterectomy was not indicated to our patient. Statin use was associated with a significant 32% reduction in stroke and a strong trend toward reducing the composite outcome of cardiovascular and cerebrovascular events [32]. Our patient was not treated with statine previously. He was treated with double platelet antiaggregant, Aspirin 250 mg, and Plavix 75 mg for three weeks which are the guidelines of the AHA/ASA stroke secondary prevention [33]. However, he was treated with corticotherapy, which remains the gold standard for the treatment of angiitis, but its role is uncertain in post-radiotherapy angiitis [34]. So far, there are no recommendations for a platelet antiaggregant treatment before radiotherapy.

It should be kept in mind that neurovascular complications can appear late after RT. The incidence of late vascular complications of radiotherapy may be impacted by improved technology, therapeutic interventions, and appropriate follow-up. An antiplatelet antiaggregant treatment can be effective in decreasing cerebrovascular events. This raises the need for prospective randomized controlled trials to establish the benefit of preventing treatment definitively. This at-risk population and defines guidelines on the management of a radiation-induced vascular disease.

© 2021 Nesrine Baradai. This is an open access article distributed under the terms of the Creative Commons Attribution 4.0 International License (CC BY-4.0).