Introduction: Myelitis in Neuromyelitis Optica spectrum disorder can have an abrupt onset.

Observation: A 17-year-old woman presented March 17, 2017 brutal tetraplegia associated with vesical sphincteric disorders with no history, preceded by intense interscapulum pain. The neurological examination objected to a flaccid muscle deficiency of the four limbs. Medullar MRI showed a hyperintensity on T2 from C2 to D2 with “Snake eye” in the axial view. The diagnosis of medullary ischemia was held. The patient was treated with Aspegic, and then she had discrete improvement (MRC testing = 1/5 in all limbs). Two months later, the appearance of a bilateral decrease of the visual acuity was more marked on the right side. An ophthalmological examination showed a severe decrease in visual acuity (right side = 4/10 and left side = 6/10). A VEP test objectified a bilateral retrobulbar demyelinating optic neuropathy.

(RABON). The diagnosis of NMOSD without AQP4-IgG was made according to the new criteria. The patient was treated with methylprednisone 1 g/day for five days relayed with oral prednisone 1 mg/Kg/J for 30 days associated with Azathioprine 2 mg/kg/d. The evolution was marked with a clear improvement (Recovery of visual acuity and partial recovery of the motor force MRC testing = 4/5).

Neuromyelitis Optica (NMO), or Devic’s disease, is a demyelinating disease affecting the Central Nervous System (CNS), predominantly the spinal cord and the optic nerves. Recently, the NMO concept was expanded into ‘NMO spectrum disorder’(NMOSD). When MRI reveals a longitudinally extensive cord lesion, the main diagnostics are acute transverse myelitis versus spinal cord ischemia [1]. It should not be forgotten that myelitis in NMSD can be abrupt onset [2]. The diagnosis of NMOSD is sometimes difficult due to several clinical and/or radiological features.

A 17-year-old woman, without any history, presented on March 17, 2017 brutal tetraplegia with vesical sphincteric disorders. Two hours after the symptoms, the neurological examination objected to a flaccid muscle deficiency of the four limbs (medical research council (MRC) testing = 0/5 in all limbs) with C2–C3 sensory level and bilateral posterior cord syndrome. Medullar MRI, sagittal T2 weighted imaging showed a hyperintensity from C2 to D2 with “Snake eye” in the axial view (Figure A), without enhancement in the T1 weighted imaging with gadolinium. Cerebral MRI was normal. The diagnosis of medullary ischemia was held in front of the sudden onset and the attack of the medullary gray matter in the axial view T1 weighted (Figure B). Paraclinical explorations (cardiac echocardiography, angiography of the supra-aortic trunk, Thoracic CT with Contrast Injection, dosage of protein S, C, ATIII, Homocysteine, Leiden Factor V and MTHFR mutation; CMV, EBV, VZV, Rubella, HSV1 and 2, VHB, VHC, HIV, syphilis, mycoplasma, NMO-IgG/aquaporin-4 (AQP4) antibody in the blood and CSF; SSA, SSB, nuclear, CCP, anti-endomysium, anti-transglutaminase anti-gliadin antibodies) was normal. Lumbar puncture was normal. The patient was treated with Aspegic. 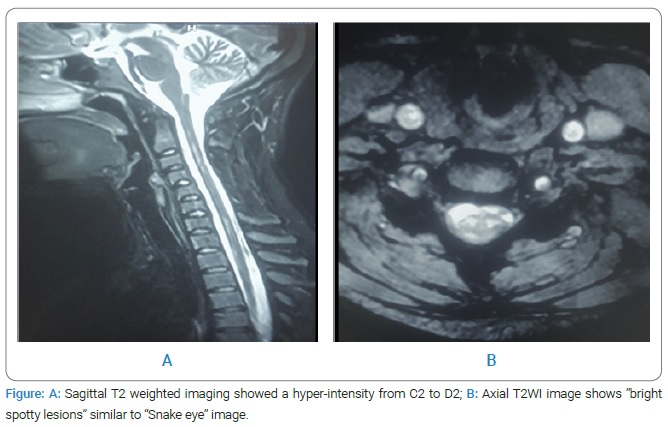 Two months after, the appearance of bilateral decrease of the visual acuity. An ophthalmological examination showed a visual acuity (on the right = 4/10, on the left = 6/10). A VEP test objectified a bilateral retrobulbar demyelinating optic neuropathy. The diagnosis of NMOSD without AQP4-IgG was made according to the new criteria [3]. The patient was treated with methylprednisone one g/day for five days relayed with oral prednisone 1 mg/Kg/J for 30 days and Azathioprine 2 mg/kg/d. The evolution was marked with visual acuity recovery and partial motor force recovery (MRC testing = 4/5). However, she kept urinary incontinence.

Spinal cord infarction (SCI) is the first diagnosis to evoke in front of hyperacute muscle deficiency and severe radicular pain at onset [1]. That is why we considered this diagnostic in the beginning. Due to bilateral retrobulbar demyelinating optic neuropathy, NMOSD without AQP4-IgG was our diagnostic according to the new criteria. MRI is characterized by hyperintensity on T2-weighted sequences and by hypointensity on T1-weighted sequences more frequently in the cervical and the upper thoracic spinal cord segments with preferential involvement of the central gray matter [4]. These findings were also found in our case (Figure). However, in some cases, it is challenging to distinguish SCI from spinal cord lesions found in NMOSD. Vascular ischemic lesions occurred in areas with poor collateral circulation as mid-thoracic cord and CONUS and were not seen in the upper cervical cord [1]. In contrast, spinal cord lesions found in NMO tended to cluster around ‘junctions,’ particularly the cervicomedullary and cervicothoracic junctions, because of important collateral circulation. Classic radiographic feature of SCI as “Owl eyes” (or “Snake eye”) appearance was common in NMO as SCI [1].

Our patient was treated according to the protocol mentioned by Xu and al, with a clear improvement [5].

It is necessary to evoke an NMOSD in front of any table of myelitis with brutal installation to institute an adequate treatment quickly and avoid the accumulation of the handicap after that.

The authors declare no potential conflicts of interest with respect to the research, authorship, and/or publication of this article.  Informed consent was obtained for this publication.

© 2021 Malek Mansour. This is an open access article distributed under the terms of the Creative Commons Attribution 4.0 International License (CC BY-4.0).