In Indonesia, most otitis media patients do not seek medical advice except when pain occurs, discharge increases, or complications. This is a case report of a chronic suppurative otitis media with multiple intracranial complications such as subdural empyema, epidural abscess, and bacterial meningitis previously misdiagnosed as tuberculous meningitis.

A 54-year-old diabetic female with a 4-month history of Chronic Suppurative Otitis Media (CSOM) with cholesteatoma was referred to the Emergency Department (ED) for the last four days with an altered mental state. She looked drowsy but still arousable on the verbal stimuli. Her husband stated that she also had complaints of left-sided weakness, paralysis of the left side of her face, fever, headache, and vomiting since last month. She was already under antibiotic treatment for CSOM. A lumbar puncture was performed after a head CT scan. The fluid was clear, transparent with protein 113 mg/dl, Cerebrospinal fluid (CSF) serum glucose ratio 39% (94:238) mg/dl, and white cell count was 75, predominantly mononuclear 91%. Based on the Lancet Consensus Score (LCS) of 13 and Thwaites score of +1, the patient was diagnosed with TBM [3] (Table 1). 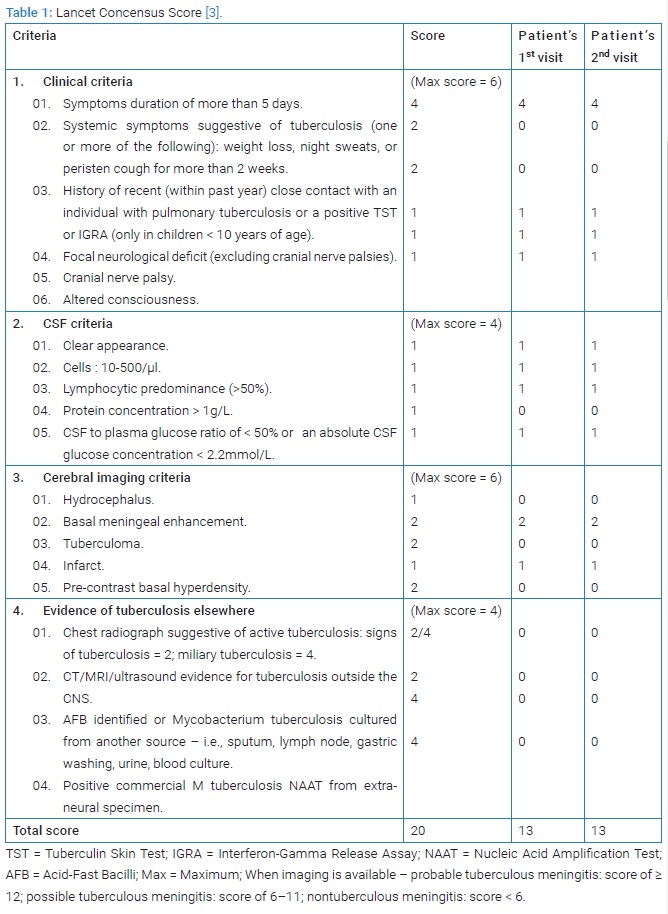 Based on the Lancet Consensus Score (LCS) score of 13 and Thwaites score of +1 [4] (Table 2), she was diagnosed with tuberculous meningitis and CSOM. Antituberculous treatment (Rifampicin 900 mg qd, Isoniazid 450 mg qd, Pyrazinamide 1500 mg qd, Ethambutol 1000 mg qd) combined with dexamethasone 5 mg q6h, pyridoxine 50 mg qd, and ceftriaxone 2 gram/day was prescribed empirically to treat her ear infection. Her consciousness was recovered after one week. After three weeks of tapered intravenous dexamethasone, she was discharged home with insulin, anti-tuberculous regiment, and oral dexamethasone that will be tapered off weekly (4 mg qd for a week, 3 mg qd for the second week, 2 mg qd for the third week and 1 mg qd for the fourth week of discharge and then stopped). 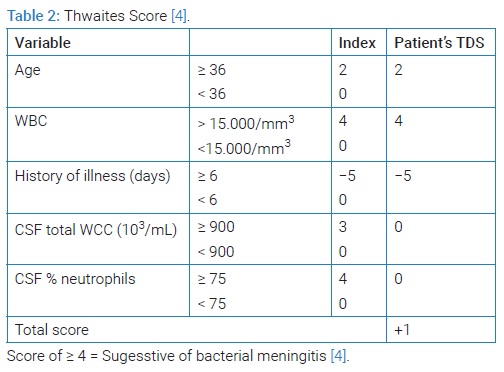 Five days after her discharge, she was brought to our hospital with another episode of altered mental state. Her blood pressure was 130/80 mmHg, her heart rate was 94 bpm, her respiratory rate was 20 per minute, and her temperature was 37.8. Findings from the physical examination were positive meningeal signs, left facial paralysis, left-sided weakness of her arm and leg accompanied by a positive left Babinski sign (Figure 1). 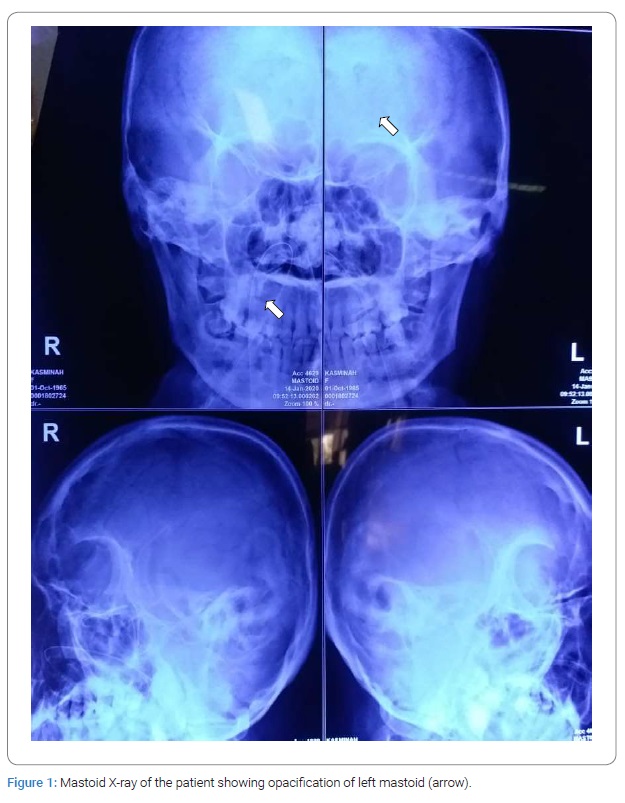 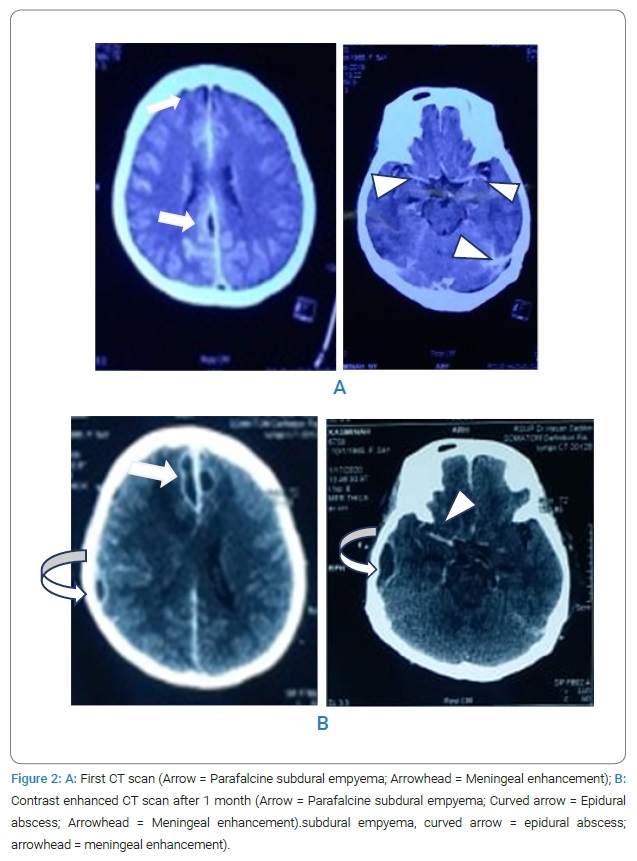 For eight weeks, the patient was treated with ceftriaxone 4 gram/day combined with intravenous metronidazole 500 mg tid and ofloxacin 3% ear drop. She was referred to an ENT surgeon and neurosurgeon for mastoidectomy and craniotomy to evacuate the abscess. No bacterium was identified in the culture. After craniotomy and eight weeks course of antibiotics treatment, she was discharged home.

Focal intracranial infections can be classified as brain abscess, epidural abscess, and subdural empyema. Subdural Empyema (SE) and Epidural Abscess (EA) comprise 15%–20% of all focal intracranial infections [9]. Because subdural space is continuous and has no anatomic barrier, subdural empyemas can spread over the convexity of the brain in between both cerebral hemispheres, opposite hemispheres, and even to the posterior fossa [10]. Empyema is commonly located in the parasagittal, interhemispheric, or parafalcine region; only 10% in the infratentorial region because cerebellar tentorium acts as the barrier to limit the spread. In addition, it is rarely spread into the spinal canal because the dura is very tightly attached around the foramen magnum.

Clinicians should be more cautious of intracranial spread in a patient with a middle ear infection presenting with “red flag” signs such as fever, headache, altered mental state, nausea, and vomiting, meningeal and focal neurologic signs; these signs were mostly found in our patient [13]. At an earlier stage, the headache characteristic is focal in 90% of patients that may become diffuse [9,14]. Symptoms and signs of altered mental state (50%–80%), seizures (10%), meningism (33%), papilledema, and focal neurologic signs (50%) usually develop in 9 days–12 days [11,15]. The most common triad of symptoms as headache, fever, and altered sensorium [16].

Laboratory profiles of EA and SE are not specific. However, leukocytosis occurs in 75% of cases with an increase of C-Reactive Protein (CRP) and Erythrocyte Sedimentation Rate (ESR) [17]. CSF examination commonly exhibits increased white blood cell count predominantly poly-morphonuclear, increased protein (greater than 100 mg/dL), decreased glucose levels (40 mg/dL). However, occasionally the CSF could be normal and sterile [14]. Antibiotic treatment could change the CSF profile in meningitis with a median decrease of 19% of CSF cell count within two days; 84% within 2 days–7 days, 93% within 8 days–14 days, and 98% within 15 days–21 days [18].

Contrast-enhanced Computed Tomography (CT) scan or Magnetic Resonance Imaging (MRI) should be performed in suspected intracranial complications. Subdural empyema appears as a hypodense area over the cerebral hemisphere or along the falx, and its margin is better delineated with contrast administration [19]. It is usually described as a crescent-shaped or elliptical area of hypointensity on T1-weighted MR underneath the skull or adjacent to the falx cerebri [20]. MRI has higher specificity than CT scan to differentiate between empyema and effusion. The location of empyema mostly involved frontal convexity in 47%, frontoparietal convexity in 28%, and para-alpine in 17% [16].

Lancet Consensus Score (LCS) and Thwaites Diagnostic Score (TDS) were proposed for a uniform definition in the diagnosis of tuberculous meningitis. In a recent retrospective cohort study, the sensitivity of LCS was 83.3%, specificity was 85.5%, the positive predictive value (PPV), and the negative predictive value (NPV) were 85.9% and 83.3%, respectively. TDS’s sensitivity was 97.5%, specificity was 40.8%, the PPV was 63.4%, and the NPV was 93.9% [21]. One of the LCS limitations was that alternative conditions should be actively considered; among others was pyogenic bacterial brain abscess [3]. In addition, our patient had been receiving multiple antibiotics, which may cause a misleading CSF profile and the value of LCS and TDS.

As dura lacks vascular supply, intravenous antibiotic therapy for 6 weeks–8 weeks was required, along with a surgical approach. However, the necessity of surgical drainage remains controversial. A case report suggests a nonsurgical strategy for patients with good clinical conditions and no major midline shift on neuro-radiological studies [22]. A wide craniotomy usually offers better results with fewer recurrences than a burr hole as it allows better results exposure, exploration, and evacuation of subdural pus [19,23,24]. Sample should be sent for aerobic and anaerobic culture. Culture results may be negative in up to 7% to 53% due to frequent use of preoperative antibiotic therapy [20].

Infections are commonly polymicrobial, administration of broad-spectrum antibiotics is recommended. Frequently advised empiric antimicrobial therapy consists of a third-generation cephalosporin combined with metronidazole [25,26]. As in this case, the patient had received ceftriaxone 4 g/day and metronidazole 1500 mg/day for four weeks before the craniotomy. The culture was negative. After six weeks of intravenous antibiotics, she was discharged home prescribed by follow-up oral cefixime 200 mg q12h and metronidazole 500 mg q8h for two weeks.

Full neurologic examination should be performed in a patient with a history of middle ear infection, headache, fever, and altered mental state. Cranial imaging and Cerebrospinal fluid analysis are necessary to identify the involvement of the central nervous system. Treatment should involve surgical consultation along with antibiotic treatment.

The authors declare no potential conflicts of interest with respect to the research, authorship, and/or publication of this article.  Informed consent was obtained for this publication.

© 2021 Fedrick Tandiawana. This is an open access article distributed under the terms of the Creative Commons Attribution 4.0 International License (CC BY-4.0).