Carbon monoxide (CO) poisoning causing lung parenchymal damage is uncommon. We illustrate a case of a 27-year-old gentleman with a recent history of self-inhalation of CO who, following an uneventful recovery, presented with acute cardiorespiratory symptoms and was subsequently diagnosed with inhalational pneumonitis. We describe the case with delayed complications pertaining to the respiratory system and its likely pathogenesis. Obtaining an accurate exposure history is key to identifying the culprit agent.

Carbon monoxide (CO) poisoning is a leading cause of serious poisoning in the United States [1]. However, it is relatively uncommon in a small Southeast Asian island state where a single tertiary center reported only 12 cases over a 5-year period [2]. Known complications stemming from acute toxic inhalation of CO include neurocognitive impairment and myocardial injury. However, lung complications as a result of CO exposure are rarely reported. We illustrate a case of CO poisoning and its possible association with delayed pulmonary sequelae.

A 27-year-old gentleman, a taxi driver with a 9-pack-years smoking history, was admitted for carbon monoxide poisoning after an apparent suicidal attempt. He was found locking himself inside an automobile with a portable stove burning solid fuel of unknown composite material. The estimated duration of exposure was 30 minutes. High flow oxygen was given en route to the hospital. Carboxyhemoglobin (COHb) level taken 3 hours post-exposure was elevated at 3.6% (normal < 1.5%). He did not require hyperbaric oxygen therapy and recovered well. He was subsequently discharged with no reported neurological or lung complications, and the chest radiograph was normal. Two weeks later, he presented again with acute onset central chest pain and shortness of breath. He had no known cardiac or respiratory disorders. He denied exposure to potential pulmonary allergens. There was no occupational, avian, or new medications exposure. He did not have any rheumatological or dermatological symptoms. He was in respiratory distress (respiratory rate 25/min) on examination. SpO2 was 84% on room air. There were bilateral crackles on lung auscultation with equal air entry.

Of note, widespread crepitus was palpable from the upper anterior chest wall to the neck. 12-lead ECG did not reveal evidence of cardiac ischemia. Chest radiography showed evidence of pneumomediastinum and bilateral airspace infiltrates (Figure 1a). CT thorax confirmed the presence of extensive pneumomediastinum with diffusely scattered pulmonary nodules and ground-glass opacities (Figure 1b). No esophageal rupture was identified on esophagogastroduodenoscopy. There was no eosinophilia on blood counts. Cardiac biomarkers were normal. Blood and sputum cultures were negative. Bronchoscopy was not performed because of the risk of aggravating underlying airway compromise. For presumed delayed inhalational pneumonitis, steroids were prescribed (oral prednisolone 0.5 mg/kg). He improved dramatically. Lung infiltrates, and pneumomediastinum was no longer evident on the chest radiograph following three days of treatment (Figure 1c). Interval CT thorax after a four-week course of tapering steroids showed a complete resolution of lung nodules and pneumomediastinum (Figure 1d). 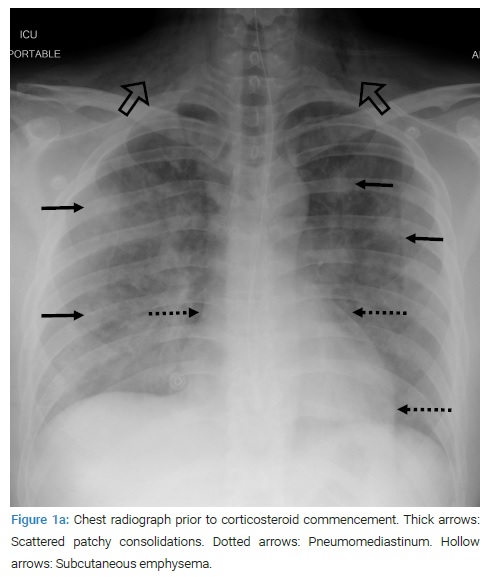 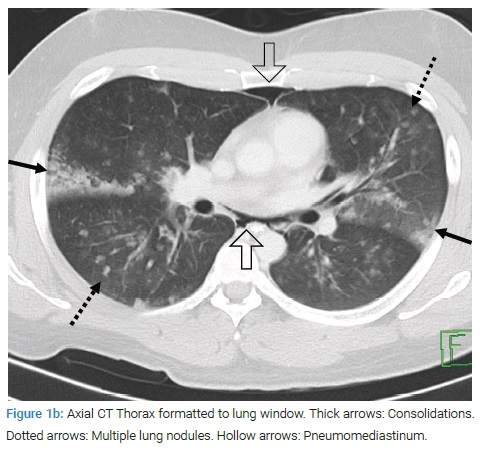 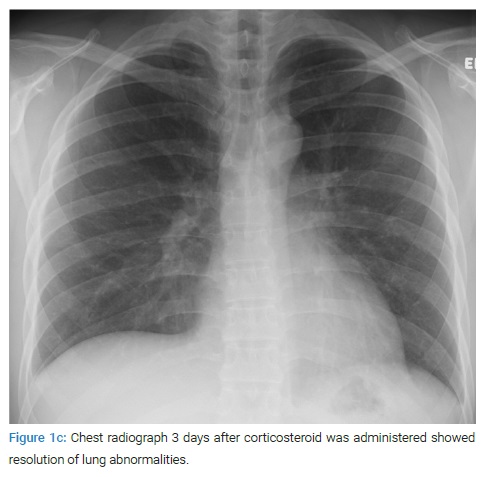 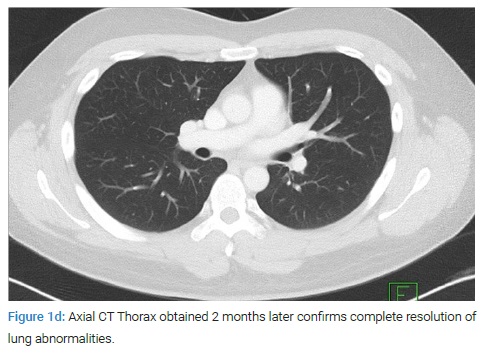 CO poisoning is known to cause neurological and myocardial complications typically [3]. However, delayed effects of CO exposure resulting in lung parenchymal injury are never established. To our knowledge, this is the first reported case of such association. The most common acute pulmonary manifestations in carbon monoxide poisoning are pneumonia and pulmonary edema [4]. These effects may be secondary to hypoxia, direct toxic effects on alveolar-capillary permeability, and myocardial injury [5]. Whether these pathogenetic mechanisms are also responsible for causing delayed lung injury is undetermined. In addition to CO, solid fuel burning may release other particulate matter [6]. CO in isolation or combination with other combustion-related particles could have triggered a subacute hypersensitivity response which caused the inflammatory changes in the lungs.

We carefully considered other possible etiologies of pneumonitis. The pattern of lung involvement seen in this case may be explained by smoking-related interstitial lung disease, specifically Respiratory Bronchiolitis Interstitial Lung Disease [RBILD]. The presentation of RBILD is usually insidious amongst smokers in middle-aged groups. Additionally, the absence of bronchial wall thickening, emphysema, and interlobular septal thickening on CT [7,8] seen normally in RBILD makes this a less likely differential diagnosis. Pneumonia also offers an alternative explanation for the clinical manifestations; however, the negative respiratory culture and rapid near-complete resolution on interval imaging post-commence of corticosteroids did not support the diagnosis. Autoimmune disorders can be associated with similar pulmonary changes; however, the absence of suggestive rheumatological symptoms and signs make this less likely [9]. Ultimately, the close chronological association between an isolated trigger and a striking clinical picture punctuated by prompt response to corticosteroid therapy suggests that CO and/or other combustion-related particles as a pulmonary allergen is the most likely etiology.

We recognize several limitations in our case report. First, the COHb level was only mildly elevated in this case. COHb level may not correlate well with the severity of the underlying condition [11]. COHb is affected by the time interval between exposure and blood sampling (longer interval lower COHb). Furthermore, COHb elimination can be accelerated by the administration of normobaric oxygen [11,12]. Second, as mentioned, the combustion of solid fuel releases a plethora of other chemical agents in addition to CO. Although it may be difficult to implicate the exact culprit agent in this case, these combustion byproducts have been studied concerning air pollution, and they more commonly result in airway hyperresponsiveness and infection [13]. Third, we did not perform a comprehensive blood panel to exclude rheumatological/autoimmune disorders. However, based on our clinical assessment, these were deemed unlikely as positive autoantibodies without clinical signs do not support the diagnosis [9]. Fourth, the absence of eosinophilia may be due to the latent period between exposure and subsequent hypersensitivity response [14] and should not preclude the diagnosis of delayed inhalational pneumonitis.

This case highlighted the importance of accurate extraction of medical history. Identifying a history of exposure to respiratory irritants is crucial in ascertaining the most likely etiology. Carbon monoxide (CO) as an etiology of pneumonitis may be associative rather than causative, and clinicians encountering cases of CO poisoning must be aware of other potential post-combustion particulate matters as a source of pulmonary allergens. Although less common, one should be mindful of the potential respiratory complications of CO poisoning. More studies are needed to understand the direct and indirect respiratory sequelae of CO poisoning.

Funding: There is no funding received for this case report.

Consent for publication: Informed consent was obtained for this publication.

© 2022 Tan Ching Yee. This is an open access article distributed under the terms of the Creative Commons Attribution 4.0 International License (CC BY-4.0).