Primary choriocarcinoma of the liver is a rare malignant tumor derived from trophoblast cells or pluripotent hepatocytes. Its main hallmark is β-HCG increased significantly. It occurs in older men very rarely and has a poor prognosis. Choriocarcinoma is a kind of malignant tumor that originated from trophoblast cells or pluripotent stem cells. It mostly occurs in the gonad with a high degree of malignancy and poor prognosis. Choriocarcinoma usually occurs in infants and women after pregnancy, which is very rare in men. Extragonadal choriocarcinoma is rare and can occur in the gastrointestinal tract, retroperitoneum, mediastinum, liver, etc.

A 61-year-old male patient presented with right upper abdominal pain without obvious inducement two weeks ago. CT scan in another hospital showed there was a space-occupying lesion in the liver. Two days ago, he was hospitalized due to right upper abdominal pain again. Blood routine and coagulation function were normal, AFP, CEA, CA199, and CA125 were negative, HBs Ag, e-antibody, and core-antibody were positive. An abdominal CT scan of the liver showed a large, slightly low-density mass, and a slightly higher density area (similar to hemorrhage) can be seen inside. MR showed the lesion was located at the junction area of the left and right lobes of the liver, with T1-hypointense and T2-hyperintense signals. DWI and ADC showed a mixed signal. The size of the lesion was about 10.0 cm × 14.1 cm × 17.2 cm. On the contrast-enhanced scan, the lesion was mainly asymptotically enhanced at the edge, with no enhancement in the center, and the local display of the right branch of the portal vein was not clear. According to the above results, it was presumed to be biliary cystadenoma or biliary cystadenocarcinoma.

As the patients’ abdominal pain cannot be relieved, the family members decided to carry out surgery to remove the lesion. During the operation, bloody as cites were discovered, and the tumor was located at the right lobe of the liver, about 15 cm × 13 cm. The surface of the tumor was uneven, and the boundary was not clear. The tumor showed cystic inside, with old bleeding and necrotic tissue. Pathological examination indicated that the cancer cells were pleomorphic, nuclear heteromorphic, mitotic. Even worse, there were obvious congestion, bleeding, and necrosis. Immunolabeling: HCG+, VIM+, CK+, CK7+, CK19+, AFP-, CA199-, Ki-67 90%. 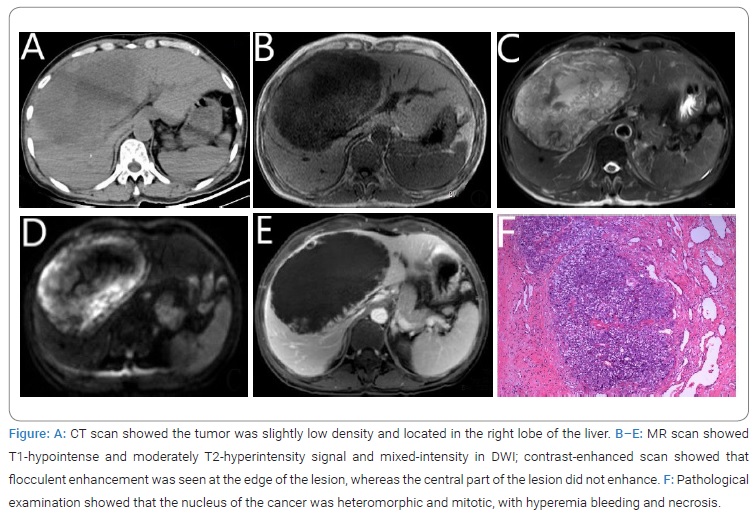 The clinical symptoms of choriocarcinoma patients are atypical, and some patients have abdominal pain due to tumor rupture [1].

Because of the high degree of malignancy, other organ metastasis can occur, such as lung [2]. Preoperative diagnosis of choriocarcinoma is difficult, and the diagnosis mainly depends on histological assessment. The tumor cells were arranged in nests and accompanied by massive necrosis and obvious hemorrhage and were composed of monocyte trophoblast and syncytiotrophoblast under the microscope. Immunohistochemically, tumor cells were strongly positive for HCG and focally positive for human placental lactogen. Ki-67 proliferation index was high (mean 75%) in the mononucleated trophoblastic cells [3]. The positive expression of CK and GATA3 were reported in some literatures [4,5]. The principal specific diagnostic test is the measurement of β-HCG levels in the serum, markedly elevated. As choriocarcinoma was not considered before the operation; β-HCG level in the serum was not measured in this case. However, after the operation, it was done, and the level was more than 262400.00 IU/L. The immunohistochemical showed that β-HCG, CK was positive and AFP, CA19-9 were negative. This case was diagnosed as primary choriocarcinoma by the related examination except for metastasis from other organs.

Choriocarcinoma is a malignant tumor originating from trophoblast cells, divided into primary (non-pregnant) and secondary (pregnant) choriocarcinoma [6]. Primary choriocarcinoma is more common in male patients with testis, mediastinum, intracranial, and other parts of the case have also been reported [7]. Primary choriocarcinoma in the liver is relatively rare, and most of the reported cases are seen in infants and females [8]. So far, about 10 cases have been reported in domestic and foreign literature, and the tumor ruptured in some cases [9]. MRI showed T1-hypointense and T2-hyperintense signal, and slightly T1- hyperintense and mixed T2 signal could be seen because of hemorrhagic and cystic degeneration. DWI showed a mixed signal. On the contrast-enhanced scan, the solid components of the tumor were inhomogeneous and gradually enhanced, and small blood vessels also could be seen. There was no enhancement in the hemorrhagic necrotic area. Primary choriocarcinoma of the liver is of high malignancy, and that is atypical imaging findings. MR examination cannot make an accurate diagnosis, but it is helpful for us to determine the location, size, extent of invasion and determine whether it is accompanied by metastasis. The treatment strategies of choriocarcinoma including surgical resection, chemotherapy, interventional therapy, radiotherapy, or a combination of the above treatments. However, because of its high degree of malignancy, there is no effective treatment strategy, making it difficult to plan further therapy [10]. As reported in former literature, the average survival is 2 months to 8 months [4]. About one year after the operation, this patient came for reexamination due to physical discomfort. The blood routine and liver function examination were abnormal. However, the patient refused to undergo imaging examination and hospitalization for further treatment and lost contact later.

All in all, an MR scan is necessary when large cystic lesions of the liver are found by ultrasound or CT scan. MR scan can further confirm whether the lesions are complicated with solid components and bleeding and the boundary is clear or not. When the lesions have the above characteristics, and the level of β-HCG in the serum is confirmed to be significantly elevated, the possibility of choriocarcinoma should be taken into consideration. Further examination should be done to check whether other organs are combined with metastasis. Treatment needs to be considered comprehensively. According to the current reports, choriocarcinoma is characterized by chemotherapy resistance, high invasion, rapid growth, and high metastatic potential, and surgical treatment is not the best choice. Recent research shows that insulin reversed the chemoresistance of choriocarcinoma cells to 5-FU by inhibiting phosphorylation of surviving [11]. The clinical application of this finding may need further study.

Written consent was obtained from next of kin, following institutional guidelines.

© 2021 Peng Wang. This is an open access article distributed under the terms of the Creative Commons Attribution 4.0 International License (CC BY-4.0).