An Uncommon Cause of Progressive Dysphagia: Oesophageal Paracoccidioidomycosis

Background: Paracoccidioidomycosis (PCM), caused by the fungus Paracoccidoides brasiliensis, is the most common endemic systemic mycosis in Latin America. It is a granulomatous systemic disease affecting mostly the skin, upper respiratory tract, and lungs and is treated with oral itraconazole or other antifungals. Oesophageal involvement is rare.

Case presentation: We report the case of a 54-year-old woman in Southern Brazil presenting with progressive dysphagia for five years, diagnosed with oesophageal PCM, and treated with cotrimoxazole and balloon endoscopic oesophageal dilation.

Conclusion: Oesophageal PCM should be included as a differential diagnosis for progressive dysphagia in patients from rural South America.

Paracoccidioidomycosis (PCM) is a granulomatous systemic disease caused by the thermo-dimorphic fungus Paracoccidioides brasiliensis (P. brasiliensis) [1]. It is the most common endemic systemic mycosis in Latin America, prevailing in rural areas and men [2]. There are no autochthonous cases reported outside of Latin America [3]. However, it is highly prevalent in the countryside of Brazil, from where over 80% of cases of this disease come [4]. Mainly afflicting poor people in developing countries, it consists of other deep mycoses in a neglected disease, for which there is a lack of studies allowing us to evaluate its proper public health impact, and therefore lack of public health programs aiming to reduce its burden [5].

The main entrance pathway of P. brasiliensis in the human body is the respiratory tract. No interpersonal transmission has been described [3]. After continued inhalation of the fungus, two different clinical presentations may occur acute or chronic disease. The acute, or juvenile form (less than 10% of the cases), more severe, is more frequent in people younger than 30-year-old, with no significant difference between sexes. The most common signs and symptoms of acute disease are lymphadenopathies, fever, weight loss, weakness, hepatosplenomegaly, and joint pain [6]. There have been reported cases of acute PCM affecting not only the respiratory tract but the bones, adrenal glands, and central nervous system, among other organs [7–10]. There are few reported cases of acute PCM in the esophagus [11,12].

The chronic form (more than 90% of cases) evolves slowly, leading to clinical manifestations after years of the disease. It is most frequent in men from 30 years to 60 years who are rural workers [1–3]. Alcoholism and smoking are established risk factors for developing the chronic disease [2,13]. Differently than in the acute form, chronic disease usually affects the skin, the upper respiratory tract, and the lungs only. Symptoms depend on which organs are affected – common symptoms are cough, dyspnoea, and painful ulcers in the oral mucosa [14]. The progression of the chronic disease may also affect the central nervous system [9]. Depending on the number of organs affected, PCM may also be classified as unifocal (if the fungus is present in only one organ) or multifocal (if the fungus is present in multiple organs) [14].

PCM diagnosis in patients with suggestive symptoms coming from an endemic area must be confirmed with histopathologic analysis of the tissue involved. The presence of yeast cells with multiple buddings, seen in the Gomori-Grocott staining indicates PCM diagnosis [4].

A 53-year-old woman searched for medical care due to progressive dysphagia to solids, with onset five years before. For the last eight months, she had been able to eat pasty foods only. In the past ten years, she presented a spontaneous weight loss of 20 kg. She denied any other symptoms and had no palpable lymph nodes. She is a smoker (1 pack a day for 30 years) and has no history of heavy drinking. Furthermore, she denied a familiar history of cancer. She was previously a rural worker and nowadays works as a home carer in an elderly house located on a farm in the municipality of Quatro Barras, in the Metropolitan Region of Curitiba, state of Paraná, Brazil.

She was forwarded urgently to the oncologic center Hospital Erasto Gaertner, in Curitiba, with a diagnostic hypothesis of oesophageal cancer. Contrast radiography of the upper digestive tract presented with a 3 cm constriction in the distal esophagus (Figure 1). An upper digestive endoscopy was performed, evidencing a 4 cm friable, infiltrative and ulcerated wound causing substenosis and blocking the passage of the endoscope. The exam was compatible with an advanced malignant neoplasm, and a lesion biopsy was collected for histopathologic analysis. A chest computed tomography was then performed for staging, showing a lump in the esophagus of 8.8 cm x 2.2 cm, with 20% of its extent contacting the aorta, and grounded-glass opacification in the lower-left pulmonary lobe. Meanwhile, histopathology of the lesion collected during endoscopy showed the absence of neoplastic cells but instead yeast cells with multiple buddings, characteristic of P. brasiliensis, visible both in hematoxylin-eosin and Gomori-Grocott stainings (Figure 2), making the diagnosis of PCM. 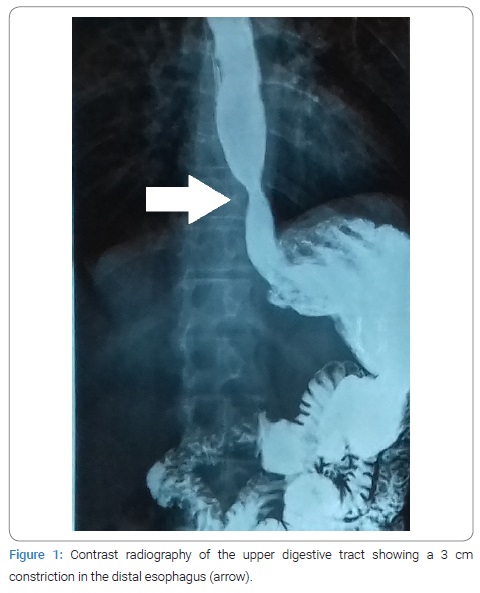 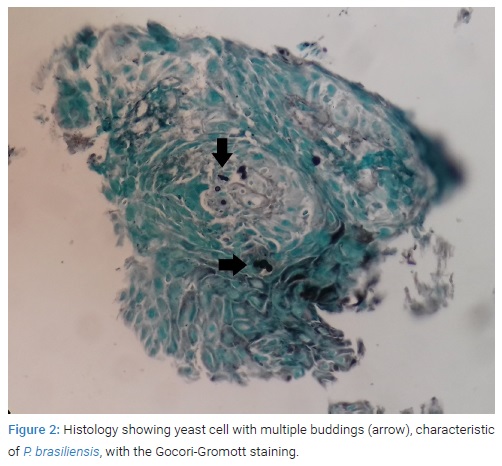 The patient was then referred to Hospital de Clínicas do Paraná. Due to difficulty swallowing pills of the oral antifungal itraconazole, she was treated with intravenous co-trimoxazole. Laboratory exams showed no kidney or liver impairment. A balloon endoscopic oesophageal dilation conducted during her internment period promoted a minor relief of the dysphagia. She was discharged from the Hospital on the thirteenth day after admission when she could already swallow the pills. She continued treatment with outpatient medical monitoring and oral co-trimoxazole, and two further sets of outpatient oesophageal dilation were scheduled.

Paracoccidioidomycosis is the most common mycotic systemic disease in Latin America [2]. The patient reported in this case had previously been a rural worker in Brazil - thus being at risk for acquiring Paracoccidioidomycosis (PCM). Furthermore, during the last years, she worked in an elderly home care clinic located in a farmhouse, where she may have entered contact with the fungus. She was 53-year-old, within the age group most commonly affected by the chronic form of the disease – between 30 years and 60-year-old. She was, however, a woman – the sex least affected by the chronic form of the disease. A case series of 1,000 PCM cases in the Southeastern state of São Paulo, Brazil, has demonstrated that 93.5% of patients came from rural areas, 85.8% were men, and 64.7% had a history of smoking [2].

The case reported was one of a monosymptomatic disease – the only symptom presented was dysphagia. The patient was an over 50-year-old adult with a chronic (5 years) progressive dysphagia to solids and with a history of smoking. These point to oesophageal cancer as a first hypothesis, to be confirmed with upper digestive endoscopy. Differential diagnoses could include autoimmune diseases such as systemic sclerosis and Sjögren’s syndrome, herpetic esophagitis, oesophageal candidiasis in immunocompromised patients, or achalasia – idiopathic achalasia or, more importantly in Brazil, due to megaesophagus in Chagas’s disease. However, the histopathologic analysis of the lesion has shown yeast cells with multiple budding, compatible with PCM.

The patient reported in this article presented chronic and multifocal PCM, with lesions in the esophagus and the lungs - although only presenting oesophageal symptoms. Lungs and the upper respiratory tract mucosas are the most commonly affected site [14]. Esophagus impairment, on the other hand, is rare [8,15]. In one of the few reports of oesophageal PCM in medical literature, a patient co-infected with HIV had much more acute clinical manifestations: odynophagia and postprandial retrosternal pain for 20 days [11]. In a review of 422 PCM cases from the Mid-Western Brazilian state of Mato Grosso do Sul, there were no mentions of dysphagia or oesophageal involvement [7]. A review of 123 cases from the Southern Brazilian state of Rio Grande do Sul also did not report any oesophageal disease by PCM, nor did a study of 216 cases in the Northeastern Brazilian state of Maranhão [4,16].

Treatment may be performed with different antifungal medications: P. brasiliensis is sensitive to the majority of antifungals, including amphotericin B, the azoles, terbinafine; and co-trimoxazole [17]. Out of these, itraconazole is the recommended drug for PCM treatment [14,17]. Unfortunately, our patient could not ingest it because of her dysphagia, so she was treated with intravenous co-trimoxazole, which was maintained later in the oral outpatient treatment. The patient presented significant clinical improvement after the third set of endoscopic oesophageal dilation, and the oral treatment with co-trimoxazole is to be maintained for 18 months to 24 months, depending on the patient’s clinical response.

© 2021 Breno Saty Kliemann. This is an open access article distributed under the terms of the Creative Commons Attribution 4.0 International License (CC BY-4.0).