A 65-year-old male smoker with a history of hypertension presented to the emergency department with a two-day history of slurred speech and left-sided hemiplegia followed by a status epilepticus. After initial resuscitation, requiring mechanical ventilation and anticonvulsants, a head Computed Tomography (CT) scan was performed and showed an approximately 4.5 cm enhancing right frontal intra-axial tumor complicated by diffuse perilesional edema and a mass effect on median structures (Figure 1A). The patient underwent right frontal craniotomy with complete excision of the tumor. Corticosteroids were started. Two weeks after the surgery, the patient developed decreased mental status. Purulent exudates came out of the postoperative wound. An emergent head CT demonstrated a 5.4 cm x 3.3 cm right-sided frontal brain abscess with air-fluid level and perilesional edema and a temporal and sub-falcorial engagement (Figure 1B). Neurosurgical consultants resumed the same craniotomy with excision of the abscess and removal of purulent material. There was a shredded appearance dura mater and a bone flap infection, which were discarded. Microbiological analysis of our patient brain tissue revealed growth of Pseudomonas aeruginosa. The patient was started on imipenem, vancomycin, and colimycin and later changed to piperacillin-tazobactam based on susceptibility. One day later, the follow-up head CT revealed an abscess resolution and showed a subcutaneous cerebrospinal leak fluid collection at the craniectomy site, resulting in a large pseudomeningocele (Figure 1C). The patient received Lumbar drainage and pressure dressing. The resected tumor was diagnosed as low-differentiation metastasis carcinoma of an unknown primary site. Despite intensive supportive care, the patient did not recover substantially, which resulted in a decision to limit active therapy. The patient ultimately died on day 30. 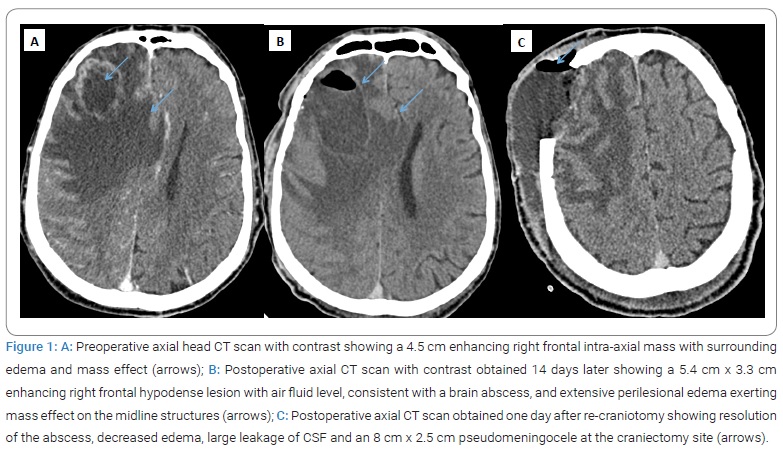 Intracerebral abscess following craniotomy is a severe complication that requires appropriate antibiotics and, most often, reoperation [1]. Pseudomeningocele can occur, especially if large surgery with dural defect, and seems to be associated with poor outcomes [2,3].

© 2022 Faten May. This is an open access article distributed under the terms of the Creative Commons Attribution 4.0 International License (CC BY-4.0).