Pleuropericardial Effusion with Cardiac Tamponade as the Debut of Asia Syndrome

The autoimmune syndrome induced by adjuvants (ASIA) is a little-known entity that includes silicone implant incompatibility syndrome (SIIS) or siliconosis. Its most common clinical presentation is nonspecific symptoms such as myalgia, arthralgia, fever, dry mouth, fatigue, paresthesias, or headache.

The autoimmune syndrome induced by adjuvants (ASIA) was defined for the first time by Shoenfeld in 2011 by putting together a series of entities that share the same etiology and pathophysiology: siliconosis, the Gulf War syndrome, macrophage myofasciitis syndrome, or post-vaccination phenomena. The common denominator of this group is the induction of immune-mediated diseases, either well-defined entities or indeterminate conditions, in genetically susceptible individuals, after exposure to adjuvants such as silicone, aluminum salts, or infectious agents among others [1].

This work presents the case of a woman who developed cardiac tamponade after rupture of her breast implants.

A 63-year-old woman with a history of fibromyalgia, hyperthyroidism, and epilepsy, without regular treatment, who underwent double adnexectomy and was a carrier of 40-year-long silicone breast implants, was admitted to our hospital for a condition of about three months of the evolution of progressive dyspnea until turning to dyspnea at rest in the latter days of the disease process, with orthopnea, paroxysmal nocturnal dyspnea and edema in the lower limbs up to the knee, without other symptoms.

On physical examination at the emergency department, the patient was hemodynamically stable, highlighting a jugular venous ingurgitation. Pulmonary auscultation abolished vesicular breath sounds at the bases, crackling sounds in the middle fields, and edema in the lower limbs up to the middle third of the thighs. A chest radiograph was solicited (Figure 1), which showed bilateral pleural effusion and cardiomegaly. The electrocardiogram showed a sinus rhythm with low voltages, and the blood test revealed a significant elevation of NT-ProBNP of 3131 ng/L and CRP of 12.1 mg/dL. 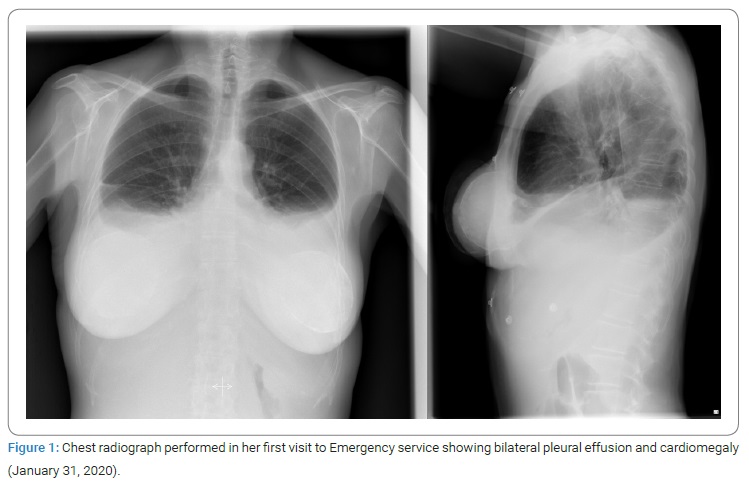 Given the finding of low voltages and cardiomegaly in a woman without a cardiological history, an evaluation by Cardiology was requested. They performed a bedside transthoracic echocardiogram showing severe circumferential pericardial effusion (> 30 mm over right chambers, swinging heart) with evidence of hemodynamic compromise. Pericardiocentesis was performed with more than 450 cc of serous and yellowish fluid extraction. Samples for biochemistry, blood gas, anatomic pathology, and microbiology were sent.

She was admitted to the Internal Medicine service for study and management. At this point, the patient denied having experienced constitutional syndrome, joint symptoms, uveitis, or skin lesions. She was asked for her personal history, focused on her silicone implants, and she was referred to have been diagnosed with a bilateral rupture of both breast prostheses while performing an ultrasound check-up some months ago. An immunological analysis was executed, which only showed positive ANAs at a low titer (1/320) with negative anti-DNA. Microbiological studies showed negative serologies for HBV, HCV, HIV, Parvovirus B19, Syphilis, Chlamydia, and Mycoplasma. IGRA tests were negative too. Besides, an isolated elevation of Ca-125 to 1889 U/ml was also noticed. Alpha-fetoprotein, Ca 15.3, Ca 19.9, CEA, and CYFRA 21.1 were at a normal range. A computed tomography (CT) scan was requested (Figure 2). It showed moderate bilateral pleural effusion, with fluid attenuation values, without areas of nodular pleural thickening, mild pericardial effusion, and soft-tissue edema, as well as findings that might suggest intracapsular rupture of both breast prostheses. 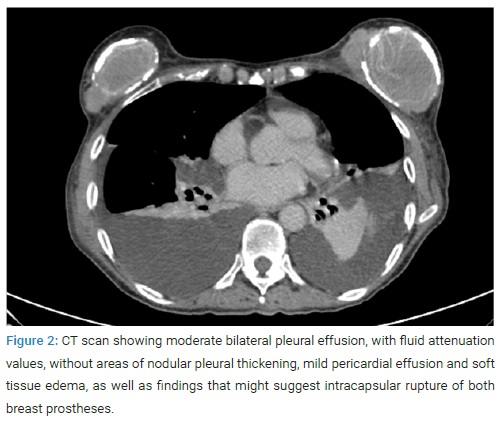 During admission, a new echocardiogram was performed (Figure 3) with evidence of recurrence of the pericardial effusion without signs of cardiac tamponade, for which she was referred to cardiac surgery to perform a pleuro-pericardial window, presenting a successful evolution. 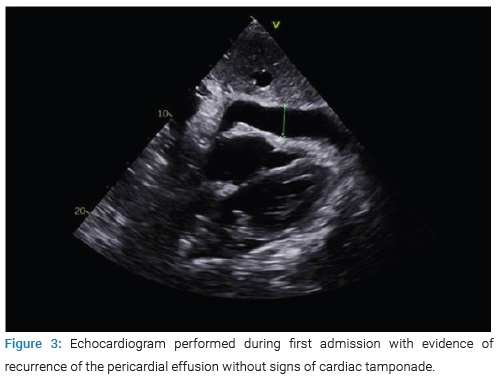 She was then assessed by the plastic surgeons, who considered it important to exclude breast-implant associated anaplastic large-cell lymphoma (BIA-ALCL) CD30+, ALK−.

We received the results from the pleural and pericardial fluid study that evidenced an exudate with a predominance of mononuclear cells, negativity for malignancy (including pericardial biopsy and cytology), and microbiological studies.

At this point, an autoimmune process due to a foreign body with pleuro-pericardial effusion was suspected, as described in the literature within the entity called ASIA (Autoimmune Syndrome Induced by Adjuvants). Therefore, prior to discharge from the hospital, the patient was given an appointment in the Plastic Surgery service for evaluation to remove the breast prosthesis is an important part of the treatment.

However, three days later, the patient was readmitted to the Internal Medicine service due to the reappearance of edema in the lower limbs and dyspnea at rest. Blood and urine tests were performed in the emergency department without relevant findings, and a chest X-ray (Figure 4) showed a left pleural effusion that had increased compared to the last control. Therefore, she was re-evaluated by the Cardiology service, repeating the echocardiogram, which showed minimal loculated pericardial effusion without evidence of tamponade or other significant alterations. On this occasion, in the Internal Medicine service, it was decided to start anti-inflammatory treatment with prednisone 0.5 mg/kg/day during seven days, showing a good clinical and analytical evolution with CRP under 0.4 mg/dL, for which she was decided to be discharged with outpatient follow-up and tapering corticosteroid treatment. The removal of broken breast prostheses was finally carried out four months later with re-implantation of new prostheses in another center. 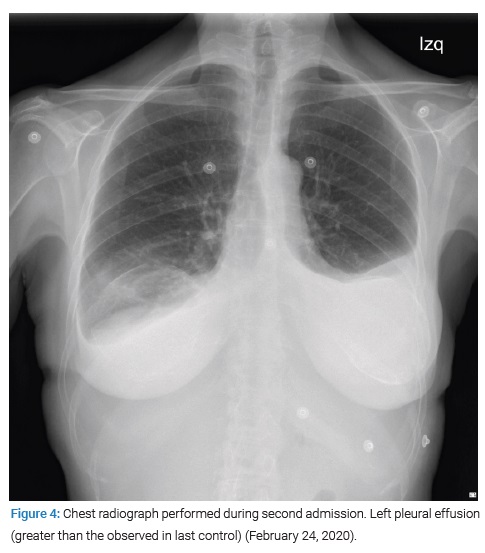 It is worth highlighting the finding of positive anti-thyroid peroxidase and anti-thyroglobulin antibodies in this second admission, determining subclinical hypothyroidism with an autoimmune origin as an added immune pathology.

Since then, the patient has been followed up with external consultations and successive blood tests (CRP under 0.4 mg/dL and NTproBNP of 385 ng/L 11 months after the first admission), echocardiography (Figure 5), and chest radiographs (Figure 6) that have shown progressive resolution of the effusion without new complications nor need to restart steroid treatment. 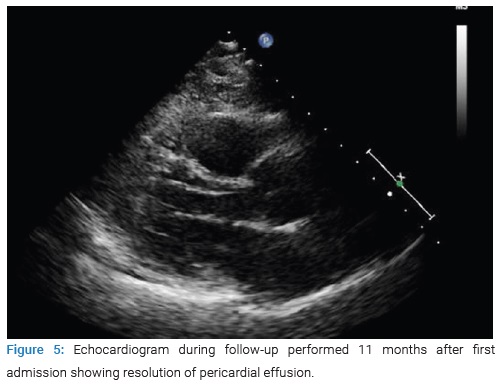 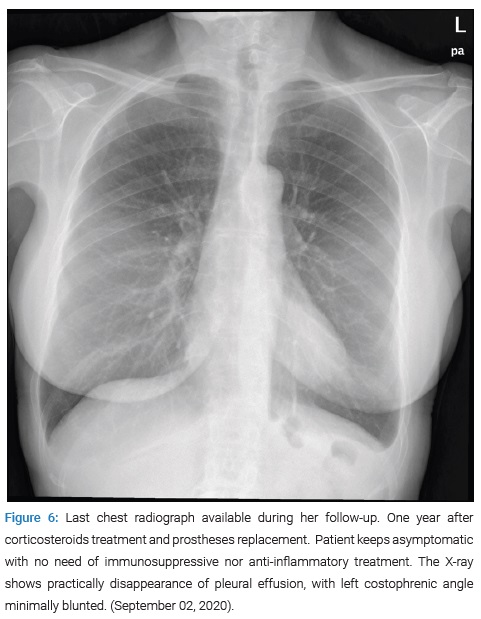 When silicone implants got popular around the 1960s, it was considered an inert element that did not impact the carrier’s health status. Nevertheless, years later, certain immune-mediated symptoms started to be described in women with silicone prostheses. It was controversial, but in the end, the term siliconosis or SIIS (silicone implant incompatibility syndrome) was coined. Nowadays, this entity is included in ASIA syndrome [1].

The silicone in breast prosthesis acts as an external and chronic stimulus that produces hyper-stimulation of the immune system in genetically predisposed individuals (HLA-DRB1, HLA-DRB4, HLA-DQ2 carriers, mainly) [2–4]. Family-associated cases with siliconosis are described in the literature. For instance, Kappel et al. published the cases of three sisters, BRCA1 carriers, who underwent a prophylactic mastectomy followed by reconstruction with silicone implants. ASIA-associated symptoms appeared in the three of them and vanished after breast prostheses removal [5]. In our example, HLA and genetic markers were not possible to be tested.

It has been described that the most frequent symptoms at the debut are nonspecific afflictions (arthromyalgia, fever, xerostomia, debilitating fatigue, paresthesias, or headache) which typically fade once prostheses are withdrawn [4]. Pleuropericardial effusion as the first sign in this disorder is known to be highly uncommon. Mizuno et al. in 2018 presented the case of a 60-year-old Japanese woman with pleuropericardial effusion due to an immune response to silicone; implants extraction ended up solving the syndrome, becoming the cornerstone of the treatment. Compared to our case, this lady did not develop cardiac tamponade nor required pericardiocentesis [6].

Bretaudeau et al. described the case of a 39-year-old woman with myopericarditis after breast implant rupture. In contrast to our patient, the pericardial effusion was non-compressive, and no pleural effusion was found [7].

Araujo and Braga wrote about a 25-year-old-patient with three major criteria of ASIA after rupture of silicone breast implant with small pericardial effusion. Even though pleuritis is mentioned in their case report, the CT image showed no evidence of pleural involvement [8].

Some other cases with serositis in the context of breast prostheses have been communicated: the case presented by Dagan et al. [9] turned out to be adult Still’s disease; Jara et al. [10] described a transitory lupus-like syndrome after prostheses implantation and a severe exacerbation of her adult Still’s disease after spontaneous rupture both solving thanks to prosthesis explantation.

Nonetheless, to the best of our knowledge, our case is the first in the literature to debut as a pleuropericardial effusion with cardiac tamponade.

As well as in the case published by Mizuno et al. [6] the pleuropericardial fluid in our patient was inflammatory. In this context, as soon as more frequent causes of pleuropericardial exudate are dismissed, it is convenient to include in the differential diagnosis the breast-implant-associated anaplastic large-cell lymphoma (BIA-ALCL). BIA-ALCL is more often indolent, but some examples have been described in literature revealing pleuropericardial effusion resulting from tissue infiltration [11].

It should be noted that in ASIA syndrome, autoantibodies production is increased. This is why this pathology associates autoimmune diseases over time (from years to decades after). For example, in a series of 300 patients affected with ASIA syndrome studied by Watad et al. in 2017, up to 89% of the subjects eventually developed an autoimmune disorder, highlighting the Mixed Connective Tissue Disease as the most commonly observed [12].

As far as our patient’s immune history is concerned, she was diagnosed with fibromyalgia which we do not know to be or not a consequence of her breast prostheses, although its symptoms are extremely similar to those nonspecific ones described in ASIA syndrome. Apart from that, she had a personal history of hyperthyroidism that afterward turned into autoimmune hypothyroidism and positive results in a blood test for antinuclear antibodies (ANA) at a low level.

In terms of managing ASIA-SIIS syndrome, the evidence is limited. Buzzard et al. in 2019 were pioneers of a guiding algorithm [13]. First, they emphasize the importance of prevention and early diagnosis and propose educating health professionals and patients about this condition and its risk factors. Once debut symptoms have appeared, the suspected diagnosis should be emitted, and an autoimmune study should be done. The decision about removing silicone implants is contentious.

On the one hand, data gathered until our days show a partial or complete resolution of the syndrome in most cases, up to 60%–80% of subjects [13,14]. On the other hand, prostheses withdrawal has risks of 20% morbidity, as described by Thomas et al. [15]. Patients ought to be informed about these scenarios.

The mentioned algorithm proposes to individually examine each case considering the most suitable approach for each patient: immunosuppressive therapies, silicone implants extirpation, or both.

Concerning our patient’s treatment, once the group got the suspected diagnosis and given that she was hemodynamically stable, breast implant removal was recommended since life-threatening consequences such as cardiac tamponade had appeared. However, she initially refused to do it. Therefore, the psychological impact of this intervention has to be taken into account to understand this position. Even with all that, during her second admission in Internal Medicine service, a steroid therapy with prednisone 0.5 mg/kg was initiated with good response, followed by a gradual dose reduction until its withdrawal. Besides, after her discharge, she got her implants replaced in a private center. Months later, she kept asymptomatic until our days.

In conclusion, additional studies are needed to determine the pathophysiology of this disorder, establish standardized diagnostic criteria and management protocols. Given the wide clinical manifestations, healthcare professionals need to understand the syndrome to include it in the differential diagnosis in patients exposed to exogenous elements. In addition, a prolonged follow-up must be kept to monitor the appearance of autoimmune pathology closely.

© 2021 Cano Ballesteros JC. This is an open access article distributed under the terms of the Creative Commons Attribution 4.0 International License (CC BY-4.0).