Diagnosing abdominal wall hernias remains challenging due to the occurrence of multiple symptoms. Only a few reports have been published describing the combination of rare abdominal wall hernias. We report the case of a 69-year-old woman with abdominal pain lasting three days. During diagnostic imaging using a CT scan, seven abdominal hernias were discovered. Although all individual hernias have been reported before, the combination of an umbilical hernia; a left femoral hernia; a bilateral high lumbar hernia (Grynfeltt-Lesshaft hernia); a left low lumbar hernia (Petit’s hernia) and a bilateral arcuate line hernia in one patient has – to our knowledge – not been reported before. This report aims to increase the understanding of abdominal wall hernias and promote clinical studies.

A 69-year-old woman presented with abdominal pain for three days at the emergency department. She had a medical history of chronic obstructive pulmonary disease (COPD) GOLD 4 due to smoking, vaginal uterus extirpation with anterior and posterior wall repair, and two pregnancies. One day prior to the presentation, the pain increased acutely and was still progressive during the presentation. The last defecation had been that morning. The patient was nauseous but did not vomit. During an examination, an ill and septic patient was seen. Abdominal examination showed an “acute abdomen, “the punctum maximum of the pain was in the right lower quadrant. No herniations were objectified, and a Valsalva maneuver was not performed because of the septic profile of the patient. She was tachycardic (112/min) but normotensive (131/92 mmHg) with a temperature of 36.5 degrees. Furthermore, she was tachypneic (20/min) with a saturation of 93% with 3-liter oxygen (home dose).

Additional laboratory blood examination showed a leukocytosis (17.4*E9/L), an increased C-reactive protein (CRP) (455 mg/l), and a hemoglobin of 9.3 mmol/L. The arterial blood gas showed a pH of 7.33 with 0.9 mmol/l of lactate. Possible diagnoses were considered to include complicated diverticulitis, appendicitis, ileus, or intestinal ischemia.

For further diagnosis, a CT scan was performed (Figure 1a t/m 1e). Imaging of the abdomen showed a perforation of the sigmoid colon. However, the origin of the perforation was not clear on the CT scan. Additionally, multiple abdominal hernias were seen: an umbilical hernia (Figure 1c); a left femoral hernia (Figure 1d); a bilateral high lumbar hernia (Grynfeltt-Lesshaft hernia) (Figure 1a); a left low lumbar hernia (Petit’s hernia) (Figure 1b) and a bilateral arcuate line hernia (Figure 1e). An abrupt change in caliber was visible at the level of the left femoral hernia, indicating incarceration. The air configuration could recognize the arcuate line hernia in the abdominal wall at the level of the arcuate line. The abdominal CT scan showed two other peculiarities (not of any significance to the topic, although interesting). The duodenum was located in the pelvis, and two diverticula were discovered. One diverticulum was located at the transition from the pars descendens of the duodenum towards the pars horizontalis and one shortly after the ligament of Treitz. Retrospectively, a previously performed CT scan (Figure 1f) already showed a herniated intestinal loop at the level of the arcuate line. 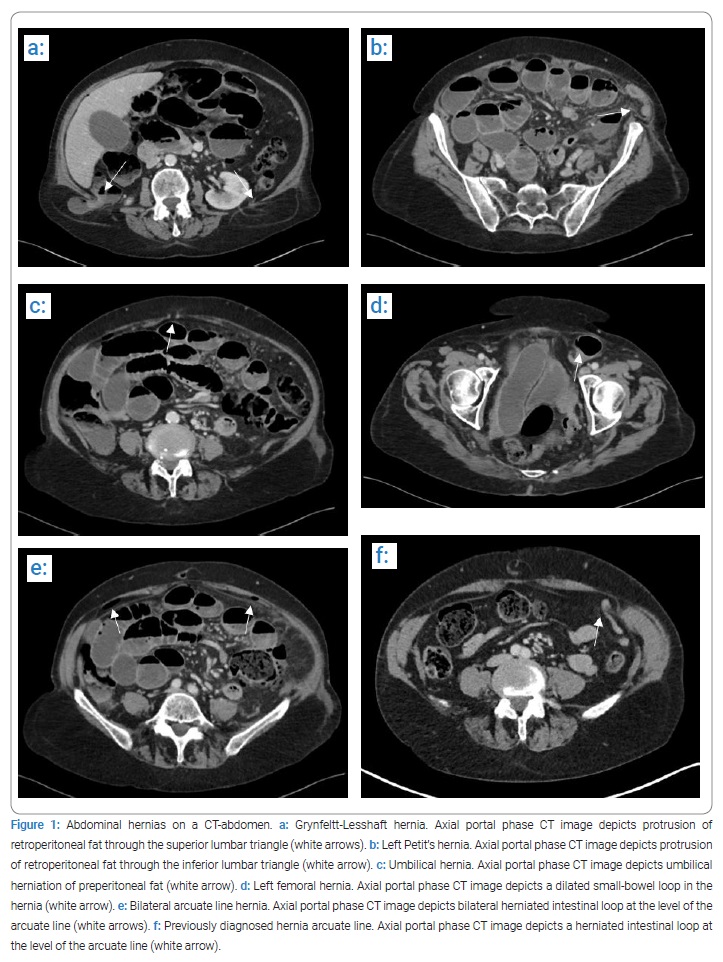 Due to the medical history and condition of the patient, the risks of an urgent laparotomy were extensively discussed with both patient and family. As a result, the patient opted for the surgical intervention, and a laparotomy was performed.

Postoperatively the patient was intubated and went to the Intensive Care Unit (ICU) for hemodynamic support. The support was phased out quickly, and the patient was detubated the day after surgery. In the event of an exacerbation of COPD, non-invasive ventilation (NIV) was started. However, one day later, the patient indicated that they no longer preferred NIV. After extensive consultation with the patient and her family, palliative care was started and the patient deceased shortly after.

Inguinal hernia is the most frequently diagnosed abdominal wall hernia (70%) and is more commonly seen in males than females [6]. The inguinal hernia can be divided into direct and indirect inguinal hernia. A direct inguinal hernia results from a defect in the posterior wall of the inguinal canal. It is medial to the inferior epigastric vessels—an indirect inguinal hernia results from a defect in the annulus internus. The content passes through the deep ring into the canal, lateral to the neurovascular bundle [7,8]. Surgical repair of an inguinal hernia is only recommended in the presence of complaints of incarceration due to the relatively small chance of incarceration (2.5%) and the relatively high chance of postoperative chronic pain. In the case of surgical repair, laparoscopic-endoscopic repair with either a totally extraperitoneal (TEP) or a transabdominal pre-peritoneal (TAPP) approach is preferred. In case of contraindications for laparoscopic-endoscopic repair, open repair according to the Lichtenstein technique is recommended [9].

The umbilical and epigastric hernias account for most of the other types of abdominal wall hernias. An umbilical hernia results from a defect of the umbilical ring, representing a defect in the linea alba. The linea alba is the collagenous part of the anterior abdominal wall. Abdominal wall distension due to increased abdominal pressure (i.e., due to pregnancy) or the deterioration of connective tissue may be responsible for the loss of mass over the umbilicus [11]. These hernias tend to be small and are more common in females. In females, obesity, pregnancy, and operative procedures have been shown to be risk factors for umbilical and inguinal hernias development. Hernias through the linea alba above the umbilicus are called epigastric hernias [12].

Depending on the type of hernia and whether incarceration is present, abdominal hernia reduction and repair should be performed. Often the reduction can be carried out at the emergency department. Due to the potential for incarceration, Spigelian and lumbar hernias require surgical repair [21,22]. Currently, there is no preferred surgical repair technique due to the low incidence of lumbar hernias [23].

Although all individual hernias have been reported before, the combination of an umbilical hernia, a left femoral hernia; a bilateral high lumbar hernia (Grynfeltt-Lesshaft hernia); a left low lumbar hernia (Petit’s hernia) and a bilateral arcuate line hernia in one patient is unique. However, despite the risk factors of smoking and increased intra-abdominal pressure due to chronic obstructive pulmonary disease (COPD) GOLD 4, it cannot be excluded that this patient was suffering from an underlying collagen disease. In patients with COPD, more attention should be paid to abdominal hernias. Further research is warranted to know whether it is necessary to lower the threshold for operation of the abdominal hernias in these patients.

© 2022 Eijking HM. This is an open access article distributed under the terms of the Creative Commons Attribution 4.0 International License (CC BY-4.0).