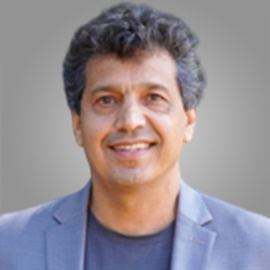 Anaphylactic reactions to the Pfizer-BioNTech mRNA vaccine may occur, but their etiology is unclear. We are suspicious of a possible link between the first dose of the Pfizer vaccine and generalized gingival inflammation associated with hyperemic, erythematous gingival enlargement that was noticed one week after vaccination. The patient was a breastfeeding woman who presented with a chief complaint of a sudden change of normal pink gum tissue to fiery red, swollen, and bleeding one week after receiving the first dose of the Pfizer vaccine. Blood disorders and mucocutaneous lesions were ruled out. The patient had a large zone of inflamed gingiva in the maxilla, extending from the gingival margin to and beyond the mucogingival junction, with no evidence of malignancy. Microscopic examination disclosed reactive changes and areas of neutrophilic exocytosis in the epithelium and plasma cell infiltrate in the lamina propria, confirming a diagnosis of plasma cell gingivitis. Changing the patient’s oral care products and non-surgical periodontal therapy with anti-inflammatory medications improved her condition modestly. Periodontal surgery was planned to facilitate self-performed oral hygiene and complete resolution of the gingival enlargement, preventing plaque-retentive niches for bacterial growth.

Gingival enlargement can be painful, disfiguring, and distressing. Medications that induce gingival overgrowth can dysregulate oral function, cause periodontal and dental infections, and delay tooth eruption in children. Prescription drug-induced periodontal disease is on the rise in children and young adults, and these drugs or their interactions can induce gingival overgrowth, specifically in younger populations. The overgrowth may provide a subgingival nidus for pathogens that promote gingivitis or periodontitis, and the tissue may even become malignant. In addition, this overgrowth may function as a reservoir for microorganisms [1].

The Pfizer-BioNTech COVID-19 vaccine received emergency approval from the United States Food and Drug Administration. Current reports from the Centers for Disease Control and Prevention suggest that anaphylactic reactions to the Pfizer-BioNTech mRNA vaccine may occur more frequently than seen with other vaccines, although the etiology of reactions to the Pfizer-BioNTech and Moderna mRNA vaccines is unclear. Therefore it is recommended that individuals with a history of anaphylaxis to polyethylene glycol, polyethylene glycol derivatives, or polysorbate inform the vaccinating center [4]. It should also be noted that multiple viruses can affect the oral cavity, including the herpes simplex virus, human immunodeficiency virus, varicella-zoster virus (chicken pox), Coxsackievirus, and human papillomavirus [5,6].

We report a possible link between the first dose of the Pfizer vaccine and generalized gingival inflammation with hyperemic, erythematous, and gingival overgrowth. Recognizing that the vaccine may be associated with gingival hyperplasia assists in managing the side effects and minimizing harm [7], especially as plasma cell gingivitis presents pathologic alterations similar to other blood disorders and diseases [8].

The patient was a 42-year-old breastfeeding woman who presented to our clinic with a chief complaint of a sudden change of normal pink gum tissue to fiery red, swollen and bleeding gingiva a week after receiving the first dose of the Pfizer vaccine. Generalized bleeding upon probing was observed. A detailed health history interview disclosed 1-year use of Sensodyne toothpaste (Glaxo Smith Kline) and ACT mouthwash (Sanofi). No abnormalities or bone loss were noted on her radiographs, and all blood chemistry parameters were within the normal range, ruling out leukemia and other blood disorders. Treatment and follow-up initial periodontal therapy comprising scaling and root planning and oral hygiene instructions were given, with modest improvements. Although the topical application of chlorpheniramine maleate (25 mg) for a period of 10 days and a low dose of oral lisinopril (5 mg once daily) to decrease inflammation is supported in the literature [9,10], it is contraindicated in breastfeeding women. Instead, the patient was prescribed ibuprofen and methylprednisone to reduce the swelling and inflammation.

The patient reported no significant medical history other than possible allergic reactions to penicillin and azithromycin. It should be noted that allergic reactions to azithromycin are exceedingly rare. Microscopic examination of a biopsy sample disclosed the heavy presence of plasma cells in the underlying connective tissue, establishing a diagnosis of plasma cell gingivitis. The patient developed soft tissue lesions that mimicked spongioma in the maxilla and gingival hyperplasia in the mandible. It is unclear whether these lesions were an oral manifestation of systemic involvement or limited to immune receptors in the oral cavity. This process is not consistent with any described and recognized allergic reactions. It is not consistent with an IgE-mediated reaction. Further, it is not consistent with any antibody-mediated hypersensitivity reaction. While it is a cellular response, the histopathologic description is inconsistent with Type 4 hypersensitivity, and a direct cause-effect relationship has not been established.

Clinical and histopathological presentation: The patient did not respond significantly to mechanical debridement, non-surgical therapy, or pharmaceutical management, so a biopsy was performed to confirm the diagnosis. Two biopsies were performed as the clinical presentation differed between the maxilla and the mandible. The patient had a large zone of inflamed gingiva in the maxilla, extending from the gingival margin to and beyond the mucogingival junction (Figure 1). However, in the mandible, gingival overgrowth was observed that covered half of the clinical length of the mandibular anterior crowns and was inflamed. Because of concerns regarding the gingival recession and esthetic appearance following the biopsy, we selected the mucogingival junction as the biopsy site. The cosmetic aspect was less of a concern for the mandibular anterior teeth because of the nature of the gingival growth, so the biopsy size was more extensive (teeth 23–26) in the mandible than in the maxilla. 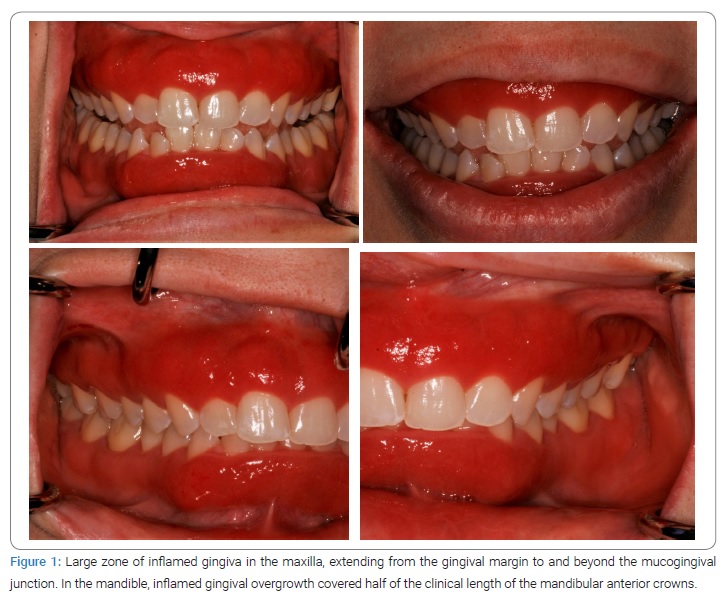 Microscopic examination was performed at John Hopkins hospital, Dermatology department, Oral pathology, Baltimore, Maryland. Histologic examination of the maxillary biopsy from the mucogingival junction of the tooth #11 area disclosed reactive changes and areas of neutrophilic exocytosis in the epithelium (Figure 2). In addition, plasma cell infiltration was observed in the lamina propria. There was no evidence of malignancy, but the biopsy from the mandibular anterior teeth disclosed a linear portion of the squamous gingival mucosa. The surface epithelium exhibited psoriasiform hyperplasia with spongiotic changes and brisk neutrophilic exocytosis. The lamina propria was engorged with a dense infiltrate of chronic inflammatory cells composed primarily of plasma cells. These plasma cells demonstrated polyclonality, as evidenced by immunostaining with Kappa and Lambda antibodies. Because of the heavy presence of plasma cells in the underlying connective tissue, the clinical and histopathologic features supported a diagnosis of plasma cell gingivitis [11]. 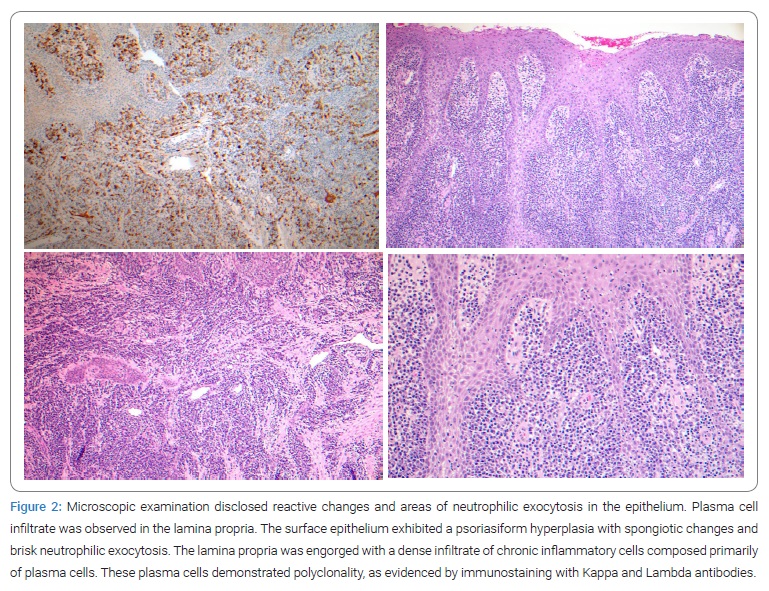 The patient reported that she had no skin lesions, and Nikolsky’s sign was negative, so mucocutaneous lesions were ruled out as a differential diagnosis.

This rare case required special management and follow-up. The etiology of plasma cell gingivitis can be allergenic, neoplastic, or unknown. The sudden development of hyperemic, erythematous, and edematous gingiva suggests a severe immune reaction. This process is not consistent with any described and recognized allergic reactions. In addition, it is not consistent with any IgE-mediated reaction.

Further, it is not consistent with any antibody-mediated hypersensitivity reaction. While it is a cellular response, the histopathologic description is inconsistent with Type 4 hypersensitivity, and a direct cause-effect relationship has not been established. Three months post-treatment, the patient showed modest improvement. However, the possible role of the vaccine in triggering plasma cell gingivitis is unclear. Because of the excessive gingival display (“gummy smile”) and incomplete eruption of the patient’s teeth, complete resolution of her gingival overgrowth is not expected. The treatment plan was to perform crown-lengthening surgery to facilitate self-performed oral hygiene and resolve the gingival enlargement further. The patient’s “gummy smile” is unaesthetic and plasma cell gingivitis exacerbated it. Without surgical treatment, the gingival enlargement acts as plaque-retentive niches for bacterial growth. Altogether, this case report suggests a possible association between plasma cell gingivitis and the Pfizer vaccine.

© 2022 Hessam Nowzari. This is an open access article distributed under the terms of the Creative Commons Attribution 4.0 International License (CC BY-4.0).