Background: Vasospastic angina is caused by vasospasm of the coronary arteries. Aldehyde dehydrogenase 2 (ALDH2) is involved in nitroglycerin metabolism and reduces oxidative stress, thereby suppressing vasospasm. However, it is unclear whether a change in the expression level of human ALDH2 in the blood correlates with the regulation of vasospastic angina.

Methods: This was a retrospective study of patients who had undergone coronary angiography (CAG) owing to angina; 2,326 patients underwent CAG, and 195 underwent an intracoronary ergonovine provocation test because of suspected vasospastic angina symptoms and no significant stenosis on baseline CAG.

Conclusions: The concentration of human ALDH2 in the blood is associated with vasospastic angina.

In 1959, Prinzmetal et al. described 32 cases of a variant form of angina characterized by rest pain associated with transient ST-segment elevation. The angina episodes often recurred, frequently waking the patient [1]. In addition, coronary spasm has been shown to play a key role in several cases of variant angina [2,3].

The prevalence of variant angina is apparently higher in East Asian populations than in their Western counterparts [4,5]. For example, in a recent study of 2,129 patients in the VA-Korea (Vasospastic Angina in Korea) registry, the positivity rate of ergonovine provocation was 21.3% [6].

East Asian variants of the aldehyde dehydrogenase 2 (ALDH2) ALDH2*2 genotypes are associated with vasospastic angina [10]. Two main variants of ALDH2 in East Asian populations; arise from replacing glutamate (Glu) at position 487 with lysine (Lys). The Glu allele (also designated ALDH2*1) encodes a protein with normal catalytic activity, whereas the Lys allele (ALDH2*2) encodes an inactive protein. As a result, Lys/Lys homozygotes have no detectable ALDH2 activity. Furthermore, because the Lys allele acts semi-dominantly, ALDH2 Lys/Glu heterozygotes have far less than half the ALDH2 activity of Glu/Glu homozygotes; in fact, the reduction in ALDH2 activity in heterozygotes is more than 100-fold [11]. Genetic variants of ALDH2 are commonly found in as many as 35%–45% of East Asians (Chinese, Japanese, Koreans, and Taiwanese) but are rare or absent in other ethnic populations worldwide [12,13].

Human ALDH2, one of 19 functional ALDH genes, has the chromosomal locus 12q24 and encodes a 517-amino acid polypeptide with mitochondrial subcellular localization [11,14].

ALDH2 plays a key role in oxidizing endogenous aldehyde products that arise from lipid peroxidation under oxidative stress, such as 4-hydroxy-2-nonenal (4-HNE) and malondialdehyde (MDA), as well as environmental aldehydes [15,16].

The cardiac protective effects of mitochondrial ALDH2 during cardiac ischemia and reperfusion injury in models of ethanol-mediated cardiomyopathy and heart failure have been demonstrated by using a variety of ALDH2 transgenic mice [17,18]. In summary, the positive role of ALDH2 in reducing oxidative stress by detoxifying reactive aldehydes may contribute to cardiac protection.

Moreover, ALDH2 is involved in the metabolism of nitroglycerin when it is used as a vasodilator. ALDH2 plays an essential role in the bioconversion of nitroglycerin to nitric oxide to achieve its vasodilating effects [4,19]. Therefore, ALDH2 is expected to play an important role in vasospastic angina. However, little active research has been undertaken on the role of ALDH2 in disorder.

To date, only studies on the genetic deficiency of ALDH2 have been undertaken, and the quantitative investigation of human ALDH2 expression levels in the blood has not yet been carried out. Therefore, in this study, we investigated whether a change in the human ALDH2 expression level in the blood plasma correlates with the regulation of vasospastic angina.

Study design and participants: This was a retrospective study of patients who underwent coronary angiography (CAG) in Chuncheon Sacred Heart Hospital between June 2011 and October 2014. Of those patients, 2,326 underwent CAG, and 203 underwent an intracoronary ergonovine provocation test because of suspected vasospastic angina symptoms and no significant stenosis on baseline CAG. One hundred and eighty-five patients for whom medical history and blood sample diagnosis information were available were included as study subjects (Figure 1). 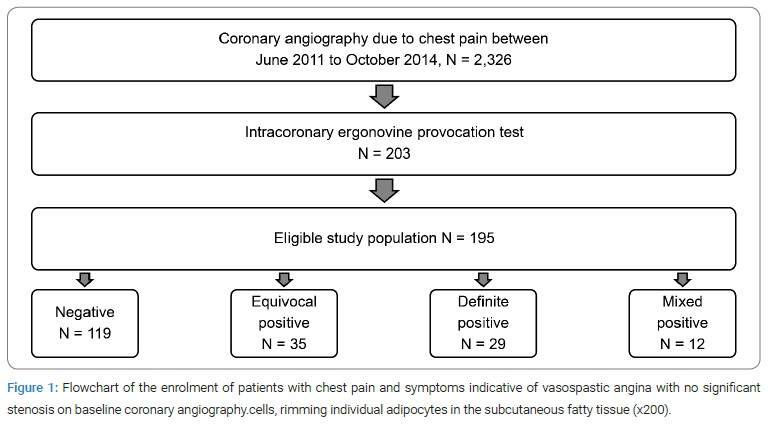 The included subjects completed a survey and submitted a blood sample that met the diagnostic criteria for coronary artery disease. In addition, arterial blood samples were collected via a trans-radial catheter to compare ALDH2 concentrations before and after the ergonovine provocation test. The plasma was extracted from the blood samples by centrifugation and was stored at −72°C. The patient records were subsequently reviewed to investigate vasospastic angina’s prevalence and relevant risk factors.

Ethics statement: The study protocol was approved by the Cardiology Ethics Committee, the institutional review board of Chuncheon Sacred Heart Hospital (IRB No. 2017-36). The IRB confirmed informed consent.

Classification of negative and positive provocation test results: A classic definition of a positive provocative test result for coronary artery spasm is that the test must induce all of the following responses to the provocative stimulus: (i) reproduction of the usual chest pain, (ii) ischemic ECG changes, and (iii) vasoconstriction of > 90% on angiography. The test result is considered equivocal if the provocative stimulus does not induce all three components. The consensus from the Coronary Vasomotion Disorders International Study Group (COVADIS) symposium was that vasoconstriction of > 90% is the angiographic threshold for the diagnosis of inducible spasm [21]. In this study, the provocation test results were classified into four groups as follows: negative, positive, equivocal positive, and mixed positive. Except for the mixed positive group, none of the groups had significant coronary artery stenosis on baseline CAG. The mixed positive group had 50%–70% coronary artery stenosis without stent implantation. The four groups are described as follows: 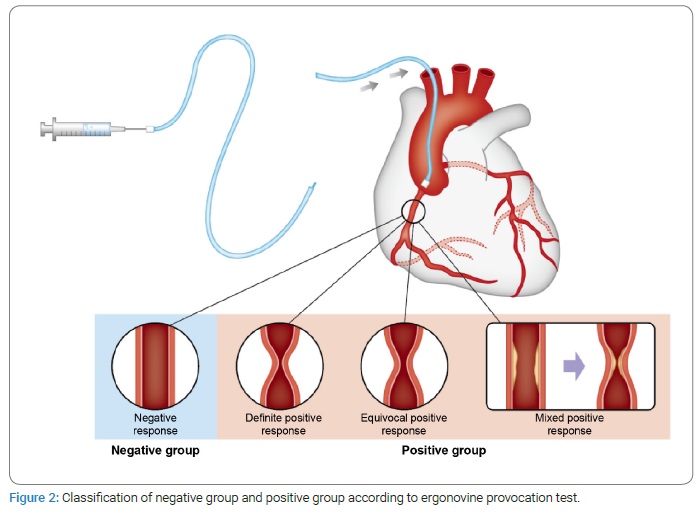 Data analysis: R language version 3.1.1 (R Foundation for Statistical Computing, Vienna, Austria) was used for all statistical analyses. The differences between pairs of groups, analyzed and divided according to baseline characteristics and provocation results, were determined. The data obtained are expressed as mean ± SD or median for continuous variables and number (percentage) for categorical variables. One-way analysis of variance with a T-test was performed on the positive provocation group, which comprised the definite positive, the equivocal positive, and the mixed positive groups. Chi-square or Fisher exact test was performed to test the hypothesis of the association between categorical variables and vasospastic angina, defined according to the provocation test results. A p-value of < 0.05 was considered statistically significant.

Demographic attributes and clinical parameters of the subjects: As described earlier, the final analysis included 195 subjects (119 men and 76 women), excluding those in which the human ALDH2 level could not be measured. The positive group accounted for 39% of the study subjects (76/195), and the negative group accounted for 61% (119/195). There were no significant differences between the groups’ risk factors for coronary artery diseases and medical history (Table 1). 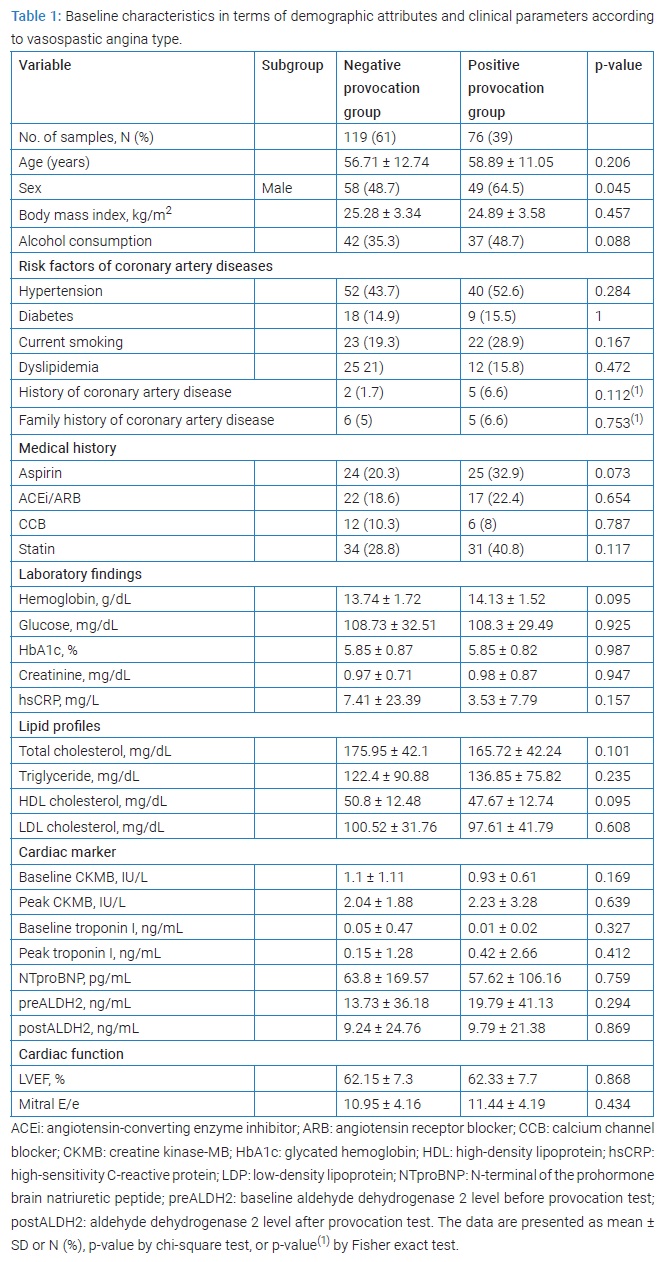 The human ALDH2 gene, one of 19 functional ALDH genes, is expressed in many tissues, especially in the liver, kidney, and muscle. It is also present in organs with abundant mitochondrial content, including the heart and brain [22]. Guo et al. reported that ALDH polymorphisms were associated with an increased risk of coronary artery disease, possibly because of interfering high-density lipoprotein cholesterol (HDL-C) and endothelial asymmetric dimethylarginine levels [10,23]. Xu et al. reported that ALDH polymorphisms could be considered a genetic risk marker for the acute coronary syndrome [24]. Recent studies have shown that ALDH2 polymorphisms that inactivate ADLH2 may contribute to cardiovascular diseases. However, the role of ALDH2 in the cardiovascular system has not yet been ascertained. Moreover, human ALDH2 plasma levels have not been elucidated.

This is the first study investigating the ALDH2 concentration in human vasospastic angina. 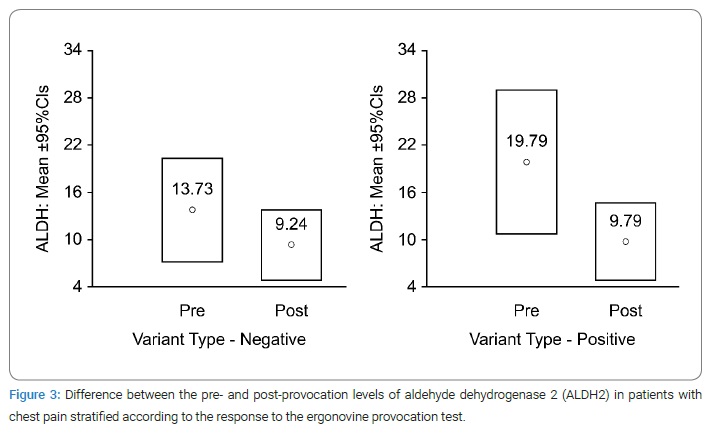 The human ALDH2 concentration in the peripheral blood after the provocation test was not significantly different because there is a large amount of mitochondrial ALDH2 in the liver and heart, and ALDH2 has rapid metabolic activity in these tissues.

In summary, if a stimulus is applied to the cardiovascular system, serum ALDH2 is consumed to stimulate reactions. Thus, in a short time, the serum ALDH2 level is reduced to a lower level than is normal. Then, over time, a large amount of ALDH2 is activated and secreted into the circulating blood from mitochondrial tissue. When repeated, this cycle became a factor contributing to the elevated baseline ALDH2 level in the positive provocation group owing to coronary vasospasm (Figure 4). 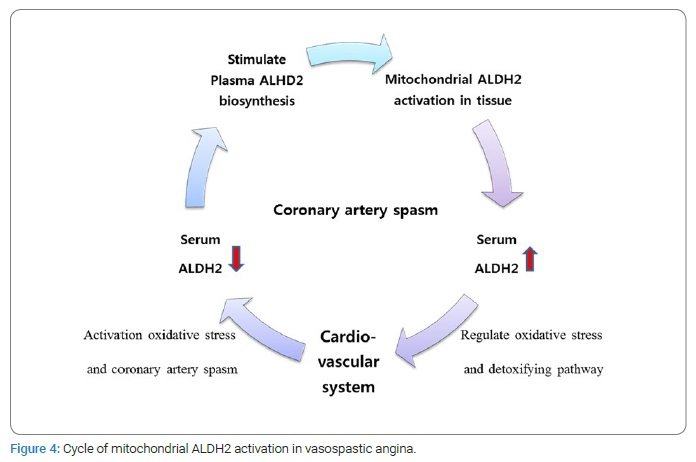 Several limitations of the present study should be mentioned:

Consent: Written informed consent was obtained from the patient to publish this report in accordance with the journal’s patient consent policy.

Ethics statement: The study protocol was approved by the Cardiology Ethics Committee, institutional review board of Chuncheon Sacred Heart Hospital (IRB No. 2017-36). Informed consent was confirmed by the IRB.

© 2022 Hyun Hee Choi. This is an open access article distributed under the terms of the Creative Commons Attribution 4.0 International License (CC BY-4.0).