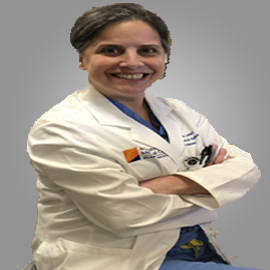 Jennifer LaRosa grew up in Rockville, Maryland where she excelled in music (piano and flute), horseback riding, and creative writing. After living as an exchange student in Germany, she matriculated at George Washington University and majored in Germanic Languages and Literature. Despite this uncommon path, Dr. LaRosa chose Medicine as her ultimate career, finished college in three years, and matriculated in medical school at The George Washington University School of Medicine. She was certain from the day she began that a career in Critical Care Medicine was in her future.

Anticipating the chaotic life such a choice might mean, Dr. LaRosa chose to train throughout the country to see as much of it as possible before settling down. She completed internship and residency at The University of Arizona, one year of Pulmonary Medicine at The University of Alabama at Birmingham, and two years of Critical Care Medicine at New York University. She began working as an attending physician at The Brooklyn Veterans Administration Medical Center and subsequently undertook a position as a Cardiothoracic Intensivist at Staten Island University for six years. By this time, she had settled in a home in New Jersey and sought a position that was not only closer to home but involved more trainee interaction, academic stimulation, and clinical excellence.

Dr. LaRosa joined Newark Beth Israel Medical Center (NBIMC) in December 2008 when she was hired as an intensivist and the Fellowship Director for Pulmonary and Critical Care Medicine. In this position, she helped the fellows achieve the highest board passage rates and the greatest number of postgraduate academic careers in the history of the fellowship. During this time, she also enrolled in a Hospice and Palliative Care Fellowship, which she completed and incorporates into her daily critical care practice. She served as Associate Division Director for Pulmonary and Critical Care Medicine and Division Director for Palliative Care Medicine for 9 and 4 years respectively.

Within one month of being at NBIMC, Dr. LaRosa was named the Director of the Medical/Surgical Intensive Care Unit (ICU). It was in this position and the one to follow, that Dr. LaRosa realized her greatest professional passion. Dr. LaRosa worked tirelessly to achieve and sustain an unflappable commitment to excellence, safety, and undisputed quality. This was manifested in the medical center’s massive reduction in raw cases of patient harm, quality metric scores that all equaled or exceeded benchmarks from 2016 through 2018 (including The Leapfrog Group and the Centers for Medicare and Medicaid Services), and devotion to a true culture of safety and transparency, the latter being something that is difficult to measure but impossible to miss when working with Dr. LaRosa.

In September of 2018, Dr. LaRosa chose to return to her surgical roots and joined the Anesthesia Associates of Morristown. She works at Morristown Medical Center, the #1 New Jersey hospital according the US News and World Report, and one of the busiest cardiac care programs in the world. She serves as the Chief Intensivist for Cardiothoracic Surgery and cares for pre-, intra-, and post-operative patients with severe, life threatening cardiac and thoracic diseases in their most vulnerable and unstable conditions.

Dr. LaRosa is the author of several book chapters, articles and abstracts. She has presented more than three-dozen invitational lectures including several as a diplomat of the American College of Chest Physicians and the Society of Critical Care Medicine.  Dr. LaRosa’s clinical interests include early recognition and treatment of sepsis, end-of-life care, and quality and performance improvement.

In her spare time, Dr. LaRosa enjoys spending time with her two teenageboys and their five dogsand if there is any additional time left over whatsoever, reading or enjoying music in a very quiet room.