Residual inflammatory odontogenic cysts are formed at the region of the previous extraction of the tooth. It can also form due to incomplete removal of other common odontogenic cysts of the jaw. A residual cyst occurs commonly in the maxilla than mandible and shows more of male predilection. Usually, residual cysts are asymptomatic, and the patient normally seeks treatment once it gets infected or causes any other discomfort. It can sometimes diagnose as an incidental finding in radiographs. We are reporting a case of large residual cyst involving the anterior region of the edentulous mandible in a 70-year-old female patient who had a progressive swelling following the extraction of lower anterior teeth. No cases in the literature have reported such a massive cyst associated with the edentulous jaw. Cystic enucleation was done, and follow up of the patient does not show any recurrence.

Odontogenic cysts of the jaw can be developmental and inflammatory [1]. Inflammatory cysts constitute 50% to 75% of all oral cysts [2,3]. Residual cysts are classified under inflammatory cysts, which form after the tooth extraction. It can also develop from epithelial remnants formed due to incomplete surgical removal of radicular or other inflammatory cysts [3,4]. Most of the time, residual cysts are found in the jaw as an incidental finding. Patients usually seek treatment once it gets infected. The incidence of residual cyst reported in the literature was 6% with predominant occurrence in the upper jaw and having male predilection [5]. These lesions are well distributed among different age groups but mostly reported in the third and fourth decade of life [6].

Since most of the cystic lesions of the jaws share similar clinical and radiographic features, the final diagnosis of odontogenic cysts mainly relies on the histopathological finding. Most of the residual cysts reported are of smaller size, but occasionally, enlarging cysts may cause bony expansion and displacement of adjacent structures, if they are not diagnosed early and treated appropriately. The development of carcinoma from the residual cysts is rare. However, it should always be considered in the differential diagnosis [7]. Here we present a case of massive residual cyst of the edentulous mandibular jaw of a 70-years-old female patient who reported to the department of oral and maxillofacial surgery. Following surgical enucleation, the lesion was sent for histopathological diagnosis and confirmed as a residual cyst. No signs of recurrence were recorded over a period of 1 year.

A 70-year-old female presented with a chief complaint of a slow-growing swelling in the anterior part of the lower jaw for the past six months. She had a history of pain in the lower front tooth region, for which she consulted a private practitioner six months back, were the removal of the offending teeth was done. Following this, she noticed a progressive enlarging swelling in the lower chin region, which was asymptomatic. An extraoral examination of the patient revealed diffuse swelling of 6 cm x 6 cm in size present at the chin region and obliteration of the mentolabial sulcus. It had extended superiorly from the lower lip to inferiorly to the lower border of the mandible involving the entire chin region (Figure 1). 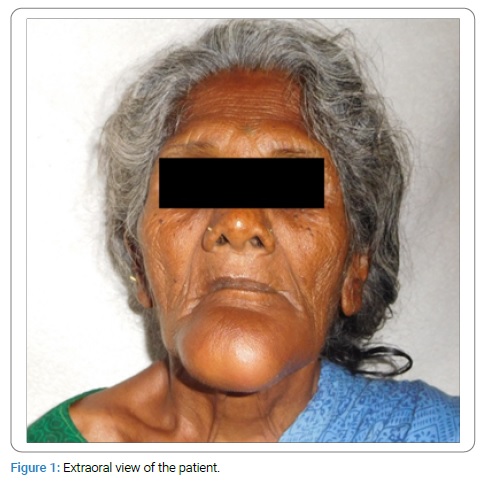 The skin over the swelling and skin surrounding the swelling appeared to be normal, with no local rise in temperature. The swelling was non-tender on palpation. Intraorally a well-defined swelling seen involving the mandibular anterior alveolar ridge extending from edentulous right premolars region to the left premolars region. The obliteration of the labial vestibule was seen. Also, a wart-like soft tissue projection was seen in the extracted anterior teeth region (Figure 2). 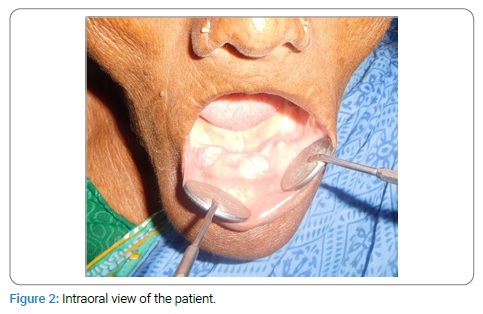 On palpation, the swelling was non-tender and firm in consistency.1 ml of straw-colored serosanguinous fluid was obtained upon aspiration of the lesion, and it showed the presence of cholesterol crystals. Orthopantomogram reveals a well-defined radiolucency that was surrounded by a thin cortical line in the anterior mandibular region with an intact lower border (Figure 3). 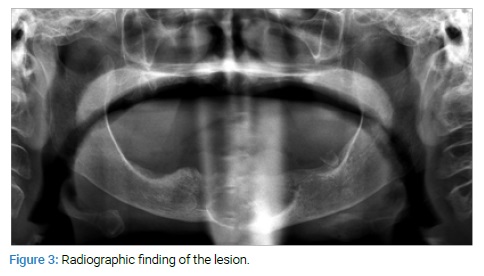 An incisional biopsy was performed after obtaining the consent of the patient. The histopathological examination revealed the presence of stratified squamous epithelial lining in an arcading pattern, and the connective tissue wall shows numerous cholesterol clefts (Figure 4). 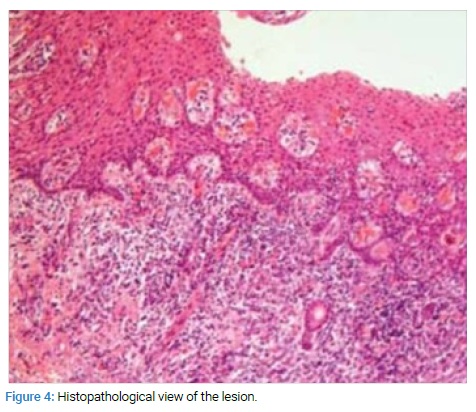 Based on the above findings, a provisional diagnosis of the residual cyst was done. The cyst enucleation was done via an intraoral approach under general anesthesia, and the surgical site was closed by using 3/0 vicryl. Histopathological examination of the excised specimen confirmed the diagnosis of the residual odontogenic cyst. No signs of recurrence were recorded over a period of 1 year.

Residual cysts are inflammatory cyst forms due to the proliferation of cell remnants after the tooth extraction or due to the failure of incomplete removal of other odontogenic cysts. These cysts are slow-growing, benign in nature, and cause considerable bone destruction if not treated early. Kambalimath et al. reported 6% incidence of residual cyst in the jaws [5], Ledesma-Montes et al. accounted for 6.1% cases [8]. However, no literature has reported such a massive cyst involving the edentulous atrophic jaw, as in the present case. These cysts are well distributed among different age groups, but most of the reported cases show prevalence in the third to fourth decade of life with a male predilection. Few studies show the occurrence of residual cyst associated with the deciduous tooth. The occurrence of residual cysts is more common in the maxilla than mandible with the ratio of 3:2 [9]. On contrary, the present case was a female patient of 70-yrs-old, and the mandibular jaw was involved. Most of the cases are asymptomatic and seen as incidental findings in radiographs, and patients usually seek treatment in case of suppuration–45.5% and due to other discomforts–40.2% [10].

In the present case-patient reported to our department once she becomes aware of the chin disfigurement. The radiographic feature of residual dental cysts is round unilocular, radiolucency with well defined sclerotic borders variable in size within the tooth-bearing regions of jaws. The radiographic finding was similar in the present case with radiolucency involving the almost entire anterior region of the lower jaw with an intact inferior border. Few studies diagnosed the occurrence of dystrophic calcifications within the lumen of the residual cyst during radiological investigation [11]. The development of Squamous Cell Carcinoma in residual cysts is rare [7]. However, it should always be considered in the differential diagnosis. Some reported cases in the literature have shown the neoplastic transformation of the epithelial lining of residual cysts [12].

For the confirmation and to prevent misdiagnosis, in the present case, during the incisional biopsy, tissues from the various regions in the lesion were obtained and sent for histopathological diagnosis. Mahajan et al. reported a case of residual cyst in a 68-yrs-old edentulous patient, which was enucleated and histopathologically confirmed as a unicystic ameloblastoma [13]. Postoperative histopathology of our tissue specimen doesn’t show any evidence of malignancy. Such an enlarging massive cyst of the atrophic jaw can lead to pathological fracture of the jaw or can cause severe bone destruction if the treatment was delayed. Management options for residual cysts depending on size are the enucleation of the cystic lining or marsupialization. Recurrence of the cyst after management was not reported. In the case of improper management, the epithelium remains in the site can go for malignant transformation. Since our patient was 70- yrs- old, management of the cyst and postoperative improvement in the quality of life was challenging. Enucleation of the residual cyst was done in the present case, and follow up periods show normal bone healing of the site without any recurrence.

Although benign and asymptomatic, the residual odontogenic cyst can cause progressive destruction of the involving bone, especially in the atrophic jaw of elderly patients, as in the present case. Therefore, the clinicians must have an awareness of the biological and histological behavior of odontogenic cysts, and proper definitive diagnosis and early treatment should be provided. Also, proper follow up of the patients have to be done to rule out any recurrence and should observe the origin of malignancy from the tissue remnants.

© 2020 Rilna P. This is an open access article distributed under the terms of the Creative Commons Attribution 4.0 International License (CC BY-4.0).