A 94-year-old male was admitted to the hospital with a UTI and found to be COVID-19 positive. Due to patient delirium and difficult venous access, a PICC line was placed for antibiotics and lab draws. The PICC line was subsequently found to be coiled in the left axillary vein. It was still functional and able to be used. The patient’s hospitalization was significantly complicated by COVID-19 and patient agitation. Additionally, the patient was located at a smaller facility without a vascular surgeon to help with the removal of the malpositioned PICC line. General surgery was able to remove the PICC line with no subsequent complications.

Peripherally Inserted Central Catheter (PICC) lines are commonly used for safe and prolonged administration of drugs and fluids in hospitalized patients. One complication of PICC lines in malposition, with a reported incidence of 5%–31%. Further complications of malposition are patient discomfort and loss of line usage. Due to these possible complications, malpositioned lines are usually repositioned or removed and replaced [1]. We present a case of a malpositioned PICC line that was unable to be repositioned and continued to be used for IV antibiotics and lab draws.

A 94-year-old male was admitted to the hospital from a nursing home for delirium, fever, and hypotension and subsequently diagnosed with a Urinary Tract Infection (UTI) and found to be COVID-19 positive. He was significantly agitated and combative during the admission due to acute encephalopathy with Alzheimer’s history. He required a 1:1 guard and soft wrist restraints. A sitter was unable to stay in the room due to his COVID positive status. He was started on IV antibiotics for the UTI. On hospital day 3, the patient was confused and removed his IV. Due to difficult venous access and patient agitation, a Peripherally Inserted Central Catheter (PICC) line was placed for antibiotics and lab draws.

The procedure note reported no complications and that the PICC line easily drew back blood and flushed. On chest x-ray following the procedure, the PICC line was noted to be curved back on itself with the tip in the left axillary vein (Figure 1). Due to the patient’s COVID-19 status and underlying comorbidities, the PICC line was felt acceptable for IV fluids and lab draws as long as it aspirated and flushed easily.  The patient remained intermittently agitated and combative, kicking and spitting at staff and refusing oral medication. A mask was placed on the patient during care to minimize COVID exposure to nursing staff. The PICC line continued to function well and did not appear to be causing any discomfort. The patient continued to have low-grade fevers after 11 days of antibiotics, which was felt to have been sufficient for clearing the UTI. At this point, a discussion was had with the patient’s daughter regarding his prognosis. Due to his ongoing fevers and COVID infection, he thought he was nearing the end of life. It was decided to transfer the patient to comfort care and remove the PICC line. A discussion was had regarding the best process for removing the coiled PICC line since the patient was hospitalized at a smaller facility without a vascular surgeon. Interventional radiology from an outside facility was consulted, and they felt that the PICC line should come out easily with no need for transfer to a larger facility. General surgery removed the PICC line with one steady motion. No resistance was felt. There was very minimal bleeding at the insertion site, and no immediate complications were noted. The patient was transferred to the hospice and placed on comfort care. There were no further complications related to the PICC line removal. The patient subsequently passed away after seven days in hospice. 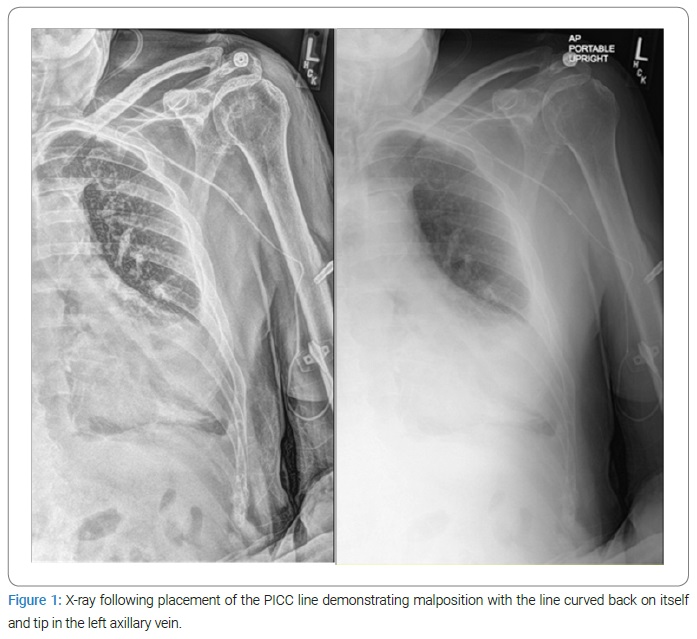 The tip position of a PICC line is critically important to avoid complications. Most American guidelines suggest that the tip’s proper location is in the inferior third of the superior vena cava. Improper tip position is one of the primary causes of PICC line thrombotic complications and catheter failure. Because of this, it is standard practice to check position of the tip after every placement of PICC line and to reposition if necessary [2]. In a study of 3,012 cancer patients who underwent insertion of a PICC line, malposition occurred in 7.87%. The most frequently occurring site of misplacement was the jugular vein, followed by the axillary vein. Using different modalities, all of the misplaced PICCs were relocated to the superior vena cava or subclavian vein [1]. Additionally, a case report discussed a PICC line’s spontaneous coiling in a 30-year-old man receiving antibiotics for drug-resistant pulmonary tuberculosis. Uncoiling of the line was attempted by saline flush and guidewire but was unsuccessful. The PICC line was subsequently removed, and a new one was placed [3].

Furthermore, a case report of an 87-year-old female receiving a PICC line for IV antibiotics reported the line’s misplacement in the azygous vein. The patient was recalled under fluoroscopic imaging, and the catheter was retracted to the inferior, superior vena cava [4]. The commonality between these cases is that malpositioned PICC lines were repositioned to avoid complications. We report a case where the malpositioned PICC line could not be repositioned due to severe patient agitation and complications of the COVID-19 pandemic. The PICC line was able to be used safely to deliver antibiotics for an 11-day period. Additionally, the coiled PICC line was able to be removed safely by a general surgeon without specialty vascular care assistance. This case suggests that PICC lines can be safely used in a malpositioned state as a last resort.

This material is the result of work supported with resources and the use of facilities at the Fargo VA Health Care System. The contents do not represent the views of the U.S. Department of Veterans Affairs or the United States Government.

© 2021 Siddharth Singhal. This is an open access article distributed under the terms of the Creative Commons Attribution 4.0 International License (CC BY-4.0).